Tokyo Tech finished second overall in the All-Japan Student Cycle-ball Championships and first in the Cycle-ball Rookie Competition, held on October 20 and 21 at Ritsumeikan University. 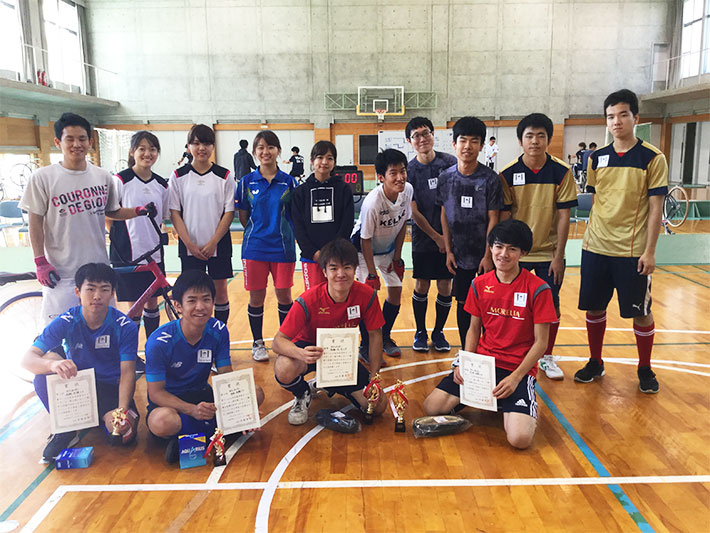 Cycle-ball is traditionally a 2-on-2 sport, but in this intercollegiate meet, each university can register four players for their team. Two players are selected for each match after analysis of the opponents' strengths and weaknesses. This year, the All-Japan Student Cycle-ball Championships included six teams, meaning a team strategy for five matches was required.

The Tokyo Tech team won their first match, and used this momentum to quickly string together three more victories. In the finals, they faced the experienced Osaka University of Economics, and lost 6-1. It was a tough defeat, but a record of four wins and one loss guaranteed Tokyo Tech second place overall. This was one place better than the previous year. This year's participants were:

The next all-Japan intercollegiate contest will be at Tokyo Tech on November 24 and 25. I invite everyone to come and witness the unique sport of cycle-ball live and to cheer us on!

Ikeda expects to be busy with lab work and thesis writing in his 4th year, but hopes to continue practicing cycle-ball in his free time.

The national Cycle-ball Rookie Competition is only for players who are in their first or second year of competition. The winning team gets a ticket to enter the All-Japan Student Cycle-ball Championships, which takes place on the following day. This year's winning team is:

Comments from Keita Ichihashi, winner of the Rookie Competition

In the Rookie Competition, my teammate was not my usual pair, so we had to adjust our movements quite a bit. It was tough at times, but our preparation paid off and I am delighted that we won. I hope we can continue to train hard before the next competition in November.

Ichihashi, a student in the Department of Architecture and Building Engineering, has a busy study schedule but he hopes to upkeep his skills with individual training whenever he can.

Cycle-ball is a soccer-like sport played indoors by two teams of two players each. Five-aside matches outdoors are also possible, but less common. Using a specially adjusted bicycle with no gears or brakes, players dribble, pass, and shoot the ball using the wheels of their bicycles. As most of the action takes place while standing on the pedals, the handlebars face upwards, and the bike also allows players to pedal backwards.

The Tokyo Tech Cycling Club is an official student club that includes members from not only the Institute, but also other universities such as Ochanomizu University and Tokyo University of Foreign Studies. The club consists of a touring group, a racing team, and a cycle-ball team, totaling over 100 members. The cycle-ball team, which includes 22 Tokyo Tech students, alumni, and members of other universities, trains at Ookayama Campus twice a week. 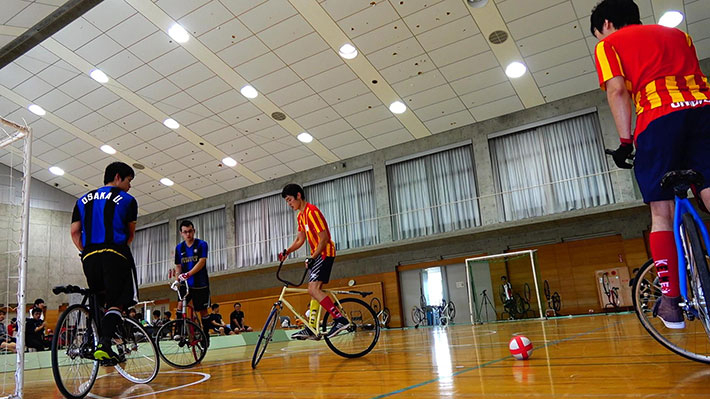 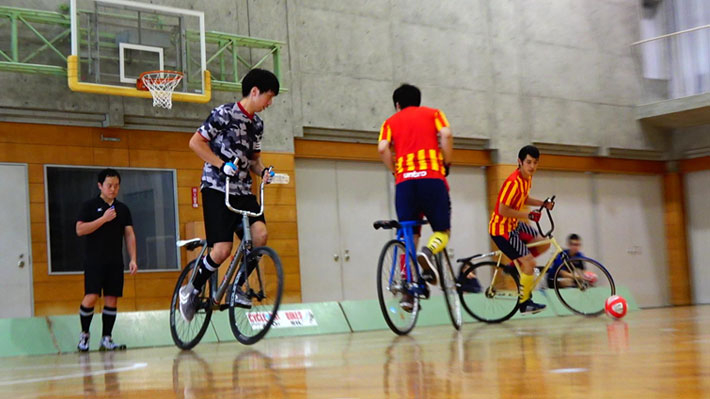 Osaka University of Economics vs. Tokyo Tech in final