A peculiar ground-state phase for superconductor NbSe2 ―It's a Bose metal!

The application of large enough magnetic fields results in the disruption of superconducting states in materials even at drastically low temperature, thereby changing them directly into insulators—or so was traditionally thought. Now, scientists at Tokyo Tech, The University of Tokyo and Tohoku University report curious multi-state transitions of these superconductors: going from superconductor to special metal and then to insulator.

Schematic figure of the four-point probe used for analyzing the electron transport properties in ultrahigh vacuum. The superconductor is one unit-layer (UL) NbSe2 grown on a bilyer graphene (BLG) on SiC substrate.

Characterized by their zero electrical resistance or alternatively their ability to completely expel external magnetic fields, superconductors have fascinating prospects for both fundamental physics and applications for e.g., superconducting coils for magnets. This phenomenon is understood by considering a highly ordered relationship between the electrons of the system; due to a coherence over the entire system, electrons form bounded pairs and flow without collisions, as a collective, resulting in a perfect conducting state without energy dissipation. However, upon introducing a magnetic field the electrons are no longer able to maintain their coherent relationship and the superconductivity is lost. For a given temperature, the highest magnetic field under which a material remains superconducting is known as the critical field.

Often these critical points are marked by phase transitions. If the change is abrupt like in the case of melting of ice, it is a first-order transition. If the transition takes place in a gradual and continuous manner by the growth of change-driving fluctuations extending on the entire system, it is called a second-order transition. Studying the transition path of superconductors when subjected to the critical field can yield insights into the quantum processes involved and allows us to design smarter superconductors (SCs) for application to advanced technologies.

Interestingly, two-dimensional superconductors (2DSCs) are the perfect candidates to study this type of phase transitions and one such novel candidate is a mono-unit layer of NbSe2. Because smaller dimension (thickness) of superconductor implies a smaller number of possible partners for electrons to form superconducting pairs, the smallest perturbation can set a phase transition. Furthermore, 2DSC is relevant from the perspective of applications in small-scale electronics.

In such materials, raising the applied magnetic field past a critical value leads to a fuzzy state in which the magnetic field penetrates the material, but the resistance is still minimal. It is only upon increasing the magnetic field further that the superconductivity is destroyed. The material is rendered an ordinary insulator. This is called the superconductor to insulator phase transition. Because this phenomenon is observed at very low temperatures, the quantum fluctuations in the system become comparable to or even larger than the classical thermal fluctuations. Therefore, this is called a quantum phase transition.

To understand the path of phase transition as well as the fuzzy or mixed state that exists between the critical field strengths in the NbSe2 ultrathin superconductor, a group of researchers measured the magnetoresistance of the material (see Fig. 1), or the response of a SC's resistivity when subjected to external magnetic field. In a nutshell (see Fig.2), Prof. Ichinokura lead summarizes, "Using a four-point probe, we estimated the critical magnetic field at the respective quantum phase boundaries in the mono-layered NbSe2." They found that as a small magnetic field is applied to the SC, the coherent flow of electrons is broken, but the electron pairs still remain. This is due to motion of vortices; the moving vortices create a finite resistance. The origin of this minimal resistance was interpreted as the material entering a special metal state, called the Bose metal (BM), which changed into an insulating state upon further increasing the magnetic field. The team also found that the transition between normal and SC states around the critical temperature was driven by quantum fluctuations with also reflecting a similar multi-transition pathway. Excited by the results, Prof. Ichinokura comments, "The scaling analysis based on the model of the Bose metal explained the two-step transition, suggesting the existence of a bosonic ground state." 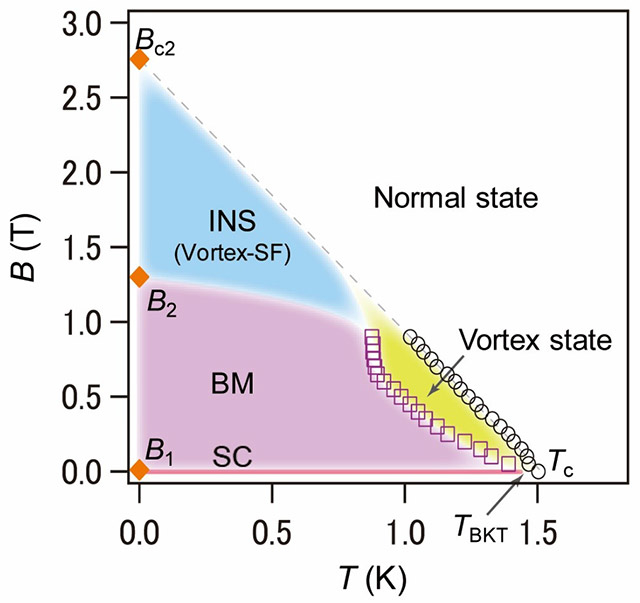 This study bolsters the theoretical claims of multi-phase transitions in superconductors thanks to the thinnest sample of atomic-scale thickness, and pushes the boundary of research further. This time it's the transition path that came out of investigating the fluctuating vortices; where will peeping into the vortex take us from here? Only science will tell!