Scientists at Tokyo Institute of Technology, Kyoto University, Kazusa DNA Research Institute, and Tohoku University have identified a protein, Lipid Remodeling reguLator 1 (LRL1), in microscopic algae that is involved in the production of triacylglycerol, a biofuel precursor. They further reveal additional proteins and biochemical pathways that contribute to the production of this precursor, and show that the protein particularly functions by limiting phosphorus in the environment. Their results could help develop new methods to improve the efficiency of biofuel production from microalgae. 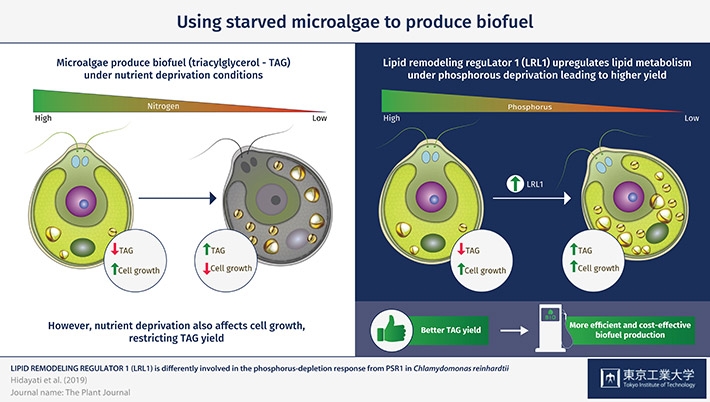 As an alternative to traditional fossil fuels, biofuels represent a more environmentally friendly and sustainable fuel source. Plant or animal fats can be converted to biofuels through a process called transesterification. In particular, the storage molecule triacylglycerol (TAG), found in microscopic algae, is one of the most promising sources of fat for biofuel production, as microalgae are small, easy to grow, and reproduce quickly. Therefore, increasing the yield of TAG from microalgae could improve biofuel production processes. With this ultimate goal in mind, Professor Hiroyuki Ohta from the Tokyo Institute of Technology and colleagues investigated the conditions under which the model microalga Chlamydomonas reinhardtii produces more TAG.

It is known that microalgae produce greater amounts of TAG when grown in environments with few nutrients. However, according to Dr. Ohta, "While low-nitrogen environments cause microalgae to produce more TAG, this strongly reduces microalgal growth and reproduction, decreasing potential gains in TAG yield." In an attempt to find conditions under which C. reinhardtii both produces more TAG and grows well, the team of researchers gave the microalga sufficient nitrogen but limited the amount of phosphorus in the environment. Under these conditions, TAG production was increased and cell growth was still promoted, increasing the overall yield of TAG.

In this experiment, the scientists used co-expression analysis to identify a C. reinhardtii protein, which they name Lipid Remodeling reguLator 1 (LRL1), that is involved in TAG production in phosphorus-limited environments. Functional analyses, in which the LRL1 gene was disrupted, revealed additional genes involved in TAG accumulation and C. reinhardtii growth under phosphorus depletion. Together, the results shed light on the underlying biochemical pathways involved in this process. A better understanding of these pathways has the potential to improve TAG—and therefore biofuel—production processes. Notes Dr. Ohta, "The discovery of proteins involved in TAG production under nutrient-depleted conditions could one day lead to methods to increase TAG yield, ultimately making biofuel production more efficient and cost-effective." This could in turn help reduce our reliance on fossil fuels and promote the widespread use of biofuels derived from microalgae.