Scientists at the Tokyo Institute of Technology (Tokyo Tech), National Institute for Materials Science, Kochi University of Technology, Shizuoka University, and Kyushu University developed a catalyst to convert abundant methane gas into more useful synthesis gas. Unlike conventional catalysts, this catalyst operates at much lower temperatures by using light, thus saving a tremendous amount of energy in the methane conversion process, and shows much better performance with high stability. 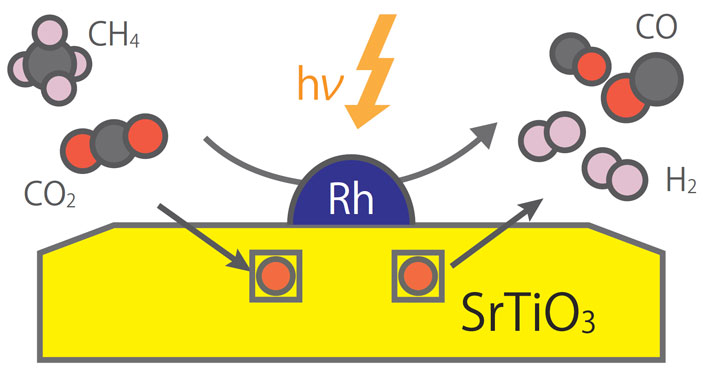 Methane is present in the natural gas that is very abundant in the earth's crust and has found many uses in modern applications, mainly as a burning fuel. Alternatively, methane can be converted into a useful mixture of hydrogen and carbon monoxide, called "synthesis gas," by reaction with carbon dioxide in what is referred to as dry reforming of methane (DRM). This DRM reaction is termed "uphill" because it requires the consumption of external energy; thermal reactors have to be at a high temperature of more than 800 °C for efficient conversion. Reaching such high temperatures requires burning other fuels, resulting in massive greenhouse gas emissions, which are the leading cause of climate change. In addition, the use of high temperatures also causes the deactivation of commonly used catalysts due to aggregation and carbon precipitation (so-called coking).

Instead of dealing with such drawbacks of thermal catalysis systems for DRM reaction, researchers have attempted to drive the conversion of methane at dramatically lower temperatures using photocatalysts activated by light. Although various photocatalyst-like materials have been proposed, it has proven challenging to obtain acceptable conversion performance at low temperatures.

Fortunately, a team of researchers, including Prof. Mashiro Miyauchi, identified a promising combination of materials that can act as an effective photocatalyst for methane conversion into synthesis gas. More specifically, the researchers found that strontium titanate combined with rhodium nanoparticles converted methane and carbon dioxide into synthesis gas under light irradiation at much lower temperatures that those required in thermal reactors.

The researchers determined that the proposed photocatalyst not only was much more stable than previously tested catalysts, but that it also avoided other issues, such as the aggregation (clumping) and coking ("sooting") of the catalyst particles. Most importantly, as stated by Prof. Miyauchi, "The proposed photocatalyst allowed us to vastly surpass the limitations of thermal catalysts, yielding high performance for synthetic gas production."

The researchers also elucidated the physical mechanisms by which the proposed photocatalyst leads to an enhanced conversion of methane. This insight is especially important because of the implications it has for other types of methane reactions. The current system requires ultraviolet (UV) light irradiation, which is just a small part of solar light. However, "The present study provides a strategic way to perform uphill reactions using methane and creates a connection between the fossil fuel industry and renewable energy applications. Now we are developing the visible-light-sensitive system." concludes Prof. Miyauchi. These findings will hopefully lead to more ecofriendly developments and help reduce carbon emissions in the future.