Mars' water was mineral-rich and salty

New study finds surface waters on early Mars may have been habitable for microbial life. 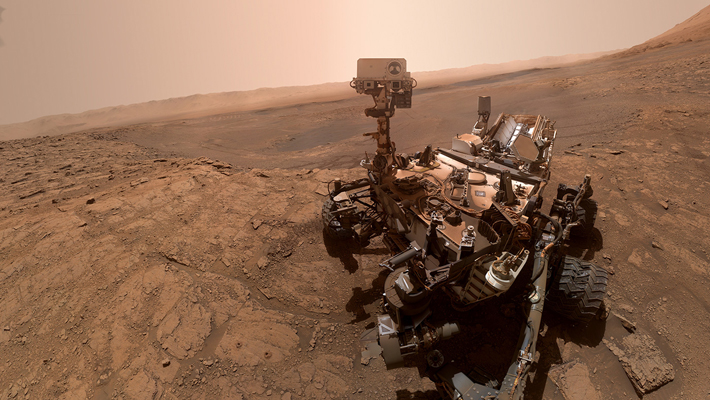 Presently, Earth is the only known location where life exists in the Universe. This year the Nobel Prize in physics was awarded to three astronomers who proved, almost 20 years ago, that planets are common around stars beyond the solar system. Life comes in various forms, from cell-phone-toting organisms like humans to the ubiquitous micro-organisms that inhabit almost every square inch of the planet Earth, affecting almost everything that happens on it. It will likely be some time before it is possible to measure or detect life beyond the solar system, but the solar system offers a host of sites that might get a handle on how hard it is for life to start.

Mars is at the top of this list for two reasons. First, it is relatively close to Earth compared to the moons of Saturn and Jupiter (which are also considered good candidates for discovering life beyond Earth in the solar system, and are targeted for exploration in the coming decade). Second, Mars is extremely observable because it lacks a thick atmosphere like Venus, and so far, there are pretty good evidence that Mars' surface temperature and pressure hovers around the point liquid water—considered essential for life—can exist. Further, there is good evidence in the form of observable river deltas, and more recent measurements made on Mars' surface, that liquid water did in fact flow on Mars billions of years ago.

Scientists are becoming increasingly convinced that billions of years Mars was habitable. Whether it was in fact inhabited, or is still inhabited, remains hotly debated. To better constrain these questions, scientists are trying to understand the kinds of water chemistry that could have generated the minerals observed on Mars today, which were produced billions of years ago.

Salinity (how much salt was present), pH (a measure of how acidic the water was), and redox state (roughly a measure of the abundance of gases such as hydrogen [H2, which are termed reducing environments] or oxygen [O2, which are termed oxidising environments; the two types are generally mutually incompatible]) are fundamental properties of natural waters. As an example, Earth's modern atmosphere is highly oxygenated (containing large amounts of O2), but one need only dig a few inches into the bottom of a beach or lake today on Earth to find environments which are highly reduced.

Recent remote measurements on Mars suggest its ancient environments may provide clues about Mars' early habitability. Specifically, the properties of pore water within sediments apparently deposited in lakes in Gale Crater on Mars suggest these sediments formed in the presence of liquid water which was of a pH close to that of Earth's modern oceans. Earth's oceans are of course host to myriad forms of life, thus it seems compelling that Mars' early surface environment was a place contemporary Earth life could have lived, but it remains a mystery as to why evidence of life on Mars is so hard to find. 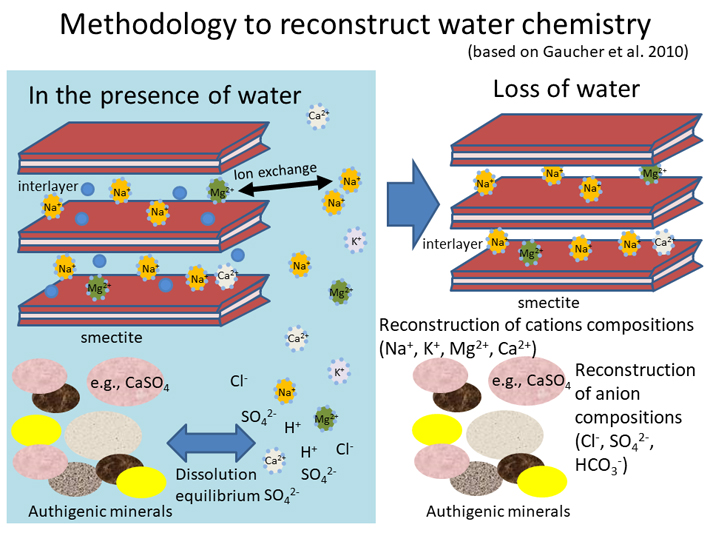 Methodology to reconstruct water chemistry
One of the clay minerals, smectite, can trap ions in water through ion exchanges in the presence of water. Even after loss of water, smectite records ion compositions within interlayers of its structure.
Credit: Nature Communications