On January 22, a press seminar was held by Professor Nobuhiro Nishiyama and Assistant Professor Takahiro Nomoto of the Laboratory for Chemistry and Life Science, Institute of Innovative Research. The event, held at Ookayama Campus, was attended by nine members of the press.

At the press seminar, an explanation was given on research achievements related to the dramatic effect, compared to conventional methods, of combining boron neutron capture therapy (BNCT)1 with polyvinyl alcohol2 (PVA). With BNCT expected to become a fifth method of cancer treatment, members of the press showed great interest in the research.

BNCT is a treatment that targets cancer cells that have taken in boron, irradiating them with thermal neutrons. It is believed that taking boron specifically into cancer cells and limiting the sites irradiated by thermal neutrons is a safe and effective treatment, with little impact on the body. In Japan, BNCT has been used to treat malignant brain tumors since 1968. The number of clinical research cases is far higher in Japan than in other countries, making it a leader in this field. Recently, Stella Pharma Corporation applied for approval of the use of boronophenylalanine (BPA)3, a compound used for BNCT, as a treatment for recurrent head and neck cancers.

BPA is taken into cells via an amino acid transporter called LAT14, which is overexpressed in cancer cells. However, if the extracellular concentration becomes low, it leaves the inside of the cell, so the intracellular concentration cannot be maintained for long periods. In clinical settings, after BPA is administered to a patient, it is necessary to immobilize the irradiation location and move the patient to a facility where the neutrons can be irradiated, a process which takes about two hours. Therefore, a method for keeping the drugs inside the cells for a longer period is needed. 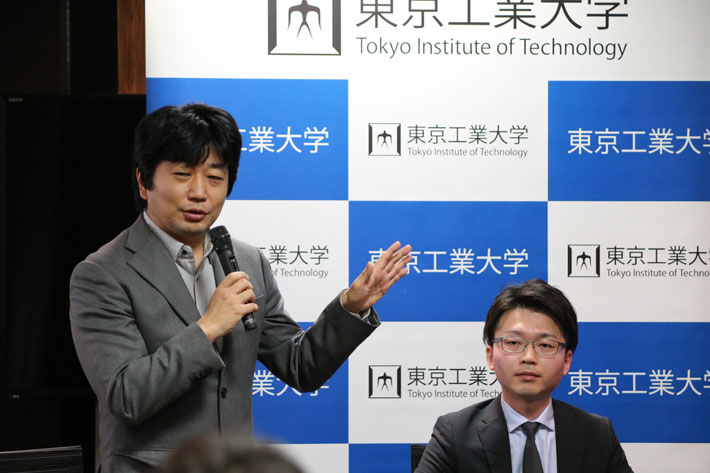 Nobuhiro Nishiyama giving an overview of the research

Today's medicines are manufactured using complex processes and expensive materials. As a result, there are issues such as increased production costs and difficulty in quality assurance, making it necessary to develop simple yet highly functional pharmaceuticals. PVA resolved issues with BPA while also responding to such social demands.

Nishiyama and Nomoto were inspired by slime chemistry5 to create a polymer drug (PVA-BPA) by mixing PVA and BPA in water. Unlike BPA, PVA-BPA was found to be taken into endosomes and lysosomes via LAT1-mediated endocytosis6 and remain in the cells for longer periods. In an experiment where BPA was administered to a mouse tumor model, a large amount of BPA dissipated from the tumor after six hours, and it was below the amount necessary for BNCT to be performed. However, with PVA-BPA, a sufficient amount remained even after 6 hours, allowing for BNCT to be performed.

The antitumor effect was examined using a mouse model where colon cancer was subcutaneously implanted. About two weeks after the cancer cells were transplanted, the compound was administered and the thermal neutrons were irradiated. Using only thermal neutron irradiation, the tumor grew rapidly, reaching nearly 100 times its original size after 24 days post-irradiation. With conventional BPA, tumor growth manifested after about 15 days. With PVA-BPA, however, the tumor manifested no growth even after 25 days, and results indicated a near full recovery. 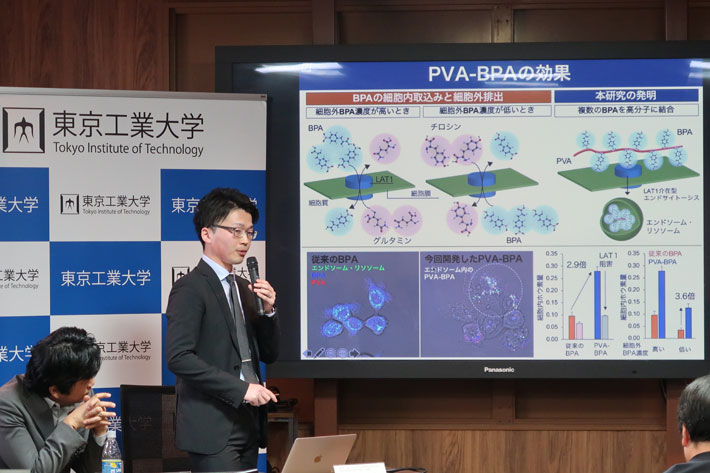 Traditionally, thermal neutrons have been produced using nuclear reactors. However, it is impossible to have a nuclear reactor in a hospital. In the future, accelerator-type neutron sources are expected to become mainstream. Japan is also the world leader in accelerator BNCT, and it has already been implemented at a number of hospitals, including Southern Tohoku General Hospital and the National Cancer Center. It is expected to become an innovative medical technology that Japan can export to the world. As for PVA-BPA, research will advance in cooperation with Stella Pharma Corporation to non-clinical trials.

This is a type of radiation therapy for treating cancer using alpha particles and lithium recoil nuclei produced by a nuclear reaction between boron atoms (10B) and thermal neutrons. It is considered an effective treatment for recurrent cancers or multiple cancers that are difficult to treat using conventional radiation therapy. In addition to photoimmunotherapy developed by Rakuten Medical, BNCT is attracting attention as the fifth method of cancer treatment. BNCT research has been ongoing for over 50 years, mainly in Japan, and Japan continues to be at the fore of cutting-edge research. Accelerator neutron sources have begun to be actively developed as thermal neutron sources, necessitating the development of new boron agents.

This is a water-soluble polymer commonly used as the main ingredient in laundry starches and liquid pastes. It is also known for having high biocompatibility, and is already being used in various medical materials. Recently, The University of Tokyo succeeded in amplifying hematopoietic stem cells using polyvinyl alcohol.

This is a compound that contains boron atoms with a structure similar to the essential amino acid phenylalanine. It is known to be selectively and efficiently taken in by cancer cells. When exposed to thermal neutrons, the boron atoms in the compound cause a nuclear reaction that kills cancer cells.

This is one of the proteins that allows cells to take in amino acids. It is rarely expressed in normal cells but is known to be highly expressed in the cell membranes of cancer cells.

Slime can be created by mixing laundry starch with borax. This is because the borate ions generated from the borax bond with multiple polyvinyl alcohols via a chemical reaction. This chemical reaction is used in this research.

Endocytosis is the process by which cells take extracellular substances into the cell. The substance developed here first bonds to the LAT1 on the cell membrane, and is then taken into the cell via endocytosis. This process is called LAT1-mediated endocytosis.