DNA is critical for life as we know it. Ensuring that DNA is kept in a stable state is therefore important in all organisms. Although DNA faces a plethora of assaults on a daily basis, most of this damage is inconsequential due to the actions of proteins that efficiently repair broken DNA. Researchers at Tokyo Tech and Yokohama City University (YCU) collaborated to understand the interplay between these different DNA repair proteins. 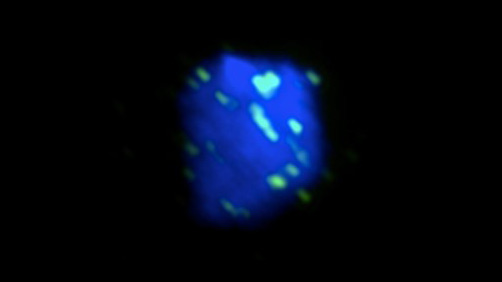 Figure 1. A yeast nucleus was irradiated with UV and imaged by fluorescent microscopy. Rad51 (green), the central protein in HR, localizes to DNA (blue) in order to repair the UV-induced damage.

DNA contains the information essential for life. It is therefore critically important to maintain the integrity of DNA. However, due to natural cellular processes and environmental factors, DNA suffers damage at an alarming frequency. To counter this damage, cells have evolved intricate DNA repair processes. One mechanism is known as homologous recombination (HR) and involves the Rad51 protein. Although Rad51 plays a central role in HR, several proteins function to help Rad51. These helper proteins typically form distinct groups that are comprised of multiple subunits.

In order to activate Rad51, helper proteins must first attach to Rad51. To study how a helper protein known as Swi5-Sfr1 attaches to Rad51, the YCU team utilized nuclear magnetic resonance spectroscopy. This led to the discovery that two regions within Sfr1 are responsible for anchoring Swi5-Sfr1 to Rad51. Next, by combining purified proteins and purified DNA in a test tube, the Tokyo Tech team demonstrated that mutations in these two regions compromised the activation of Rad51 by Swi5-Sfr1. The researchers reasoned that yeast cells containing mutations in these two regions of Sfr1 would be unable to repair DNA damage, but they were surprised to see that this was not the case. The teams hypothesized that a protein present in the cell but absent from the test tube ― which only contains carefully selected purified materials ― might be rescuing the DNA repair process. The laboratory of senior author Prof. Hiroshi Iwasaki (Tokyo Tech) had previously shown that there are two HR sub-pathways in yeast: one that relies on Swi5-Sfr1 and another that is dependent on Rad51-related helper proteins. To test whether this other sub-pathway was compensating for the function of mutant Swi5-Sfr1, they made yeast cells lacking Rad51-related helper proteins then re-examined whether mutant Swi5-Sfr1 could promote DNA repair. Remarkably, mutant Swi5-Sfr1 failed to activate Rad51 and cells were unable to repair their DNA. This suggests that the function of the Swi5-Sfr1 helper protein in activating Rad51 is supported by Rad51-related helper proteins.

The authors now propose that, rather than functioning independently of each other as was previously thought, Swi5-Sfr1 and the Rad51-related helper proteins collaborate to activate Rad51. "We have seen this collaborative effort between the helper proteins to repair DNA in living cells," says lead author Dr. Bilge Argunhan, a specially appointed assistant professor in Prof. Hiroshi Iwasaki's laboratory. "Now we want to reconstitute the activation of Rad51 in a test tube with both Swi5-Sfr1 and the Rad51-related helper proteins. We believe this approach will be effective in uncovering the finer details involved in this interplay." Some human diseases including several cancers are associated with defects in HR. Since the fundamental mechanisms of HR are evolutionarily conserved from yeast to humans, the authors will combine the powerful genetics that is possible in yeast with biochemical approaches to gain new insights into DNA repair that may be relevant to understanding human disease.