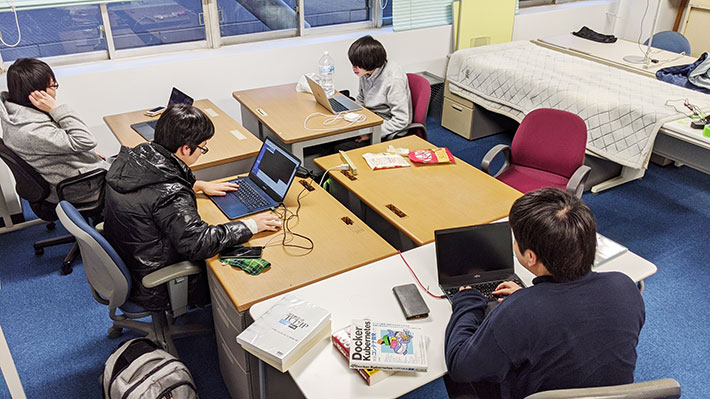 The winning team consisted of four students from Digital Creators Club traP, an official Tokyo Tech Student Club, and one student from the School of Environment and Society. The group, who finished first in both qualifications rounds, emerged victorious from among the 15 finalist teams, leaving their Keio University rivals in second place.

Ohashi, Kishimoto, Shitozawa, and Takayama were also part of the winning team at ICTSC 2018. The unique name of this year's winning team refers to a popular stamp that was used by traP in their internal communications. Affiliations above were accurate at the time of the contest.

ICTSC is a server and network troubleshooting competition run by students for students. Intended for members of vocational schools, technical colleges, and universities, the contest aims to boost interest and skills in IT and network technology among youngsters across Japan, regardless of their academic background. Participants get a chance to polish both their individual techniques and teamwork abilities as they seek solutions to actual problems that may occur during the operation of web services.

I am very pleased that we were able to win this contest for the second year running.

We finished first in both qualification rounds, but fell behind in the first half of the finals. Despite the tense atmosphere, I am glad the team was able to regain its composure.

I think we achieved this result because we made the most of the knowledge we acquired at network-related lectures and the web service development and operations experience gained at traP. There were issues that we were not able to solve during the contest, and that motivates us to work even harder and achieve better results in the next competition.