Scientists at Tokyo Institute of Technology (Tokyo Tech) and the Australian Nuclear Science and Technology Organisation (ANSTO), discover a new family of high proton-conducting materials—"the hexagonal perovskite-related oxides"—and shed light on the underlying mechanisms responsible for their conductivity. Their findings lead the way to uncovering other similar materials, furthering the research on developing low-cost and scalable renewable energy technologies. 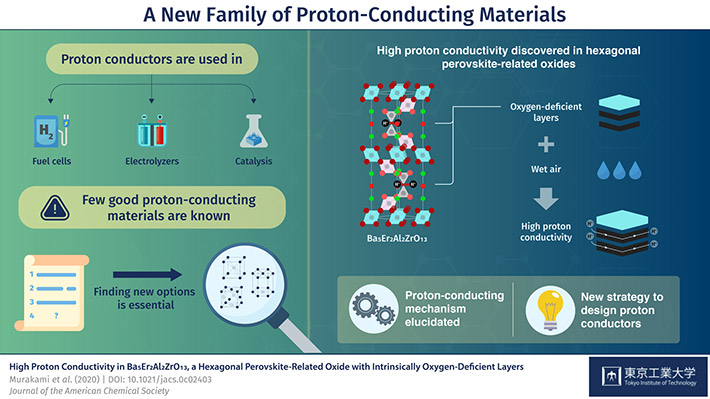 Over the past few years, fuel cells have become a focal point of research in eco-friendly technology because of their superior abilities to store and produce renewable energy and clean fuel. A typical type of fuel cell gaining ground is the proton-conducting fuel cell, which is primarily made of materials through which hydrogen ions (protons: H+), can easily move. Proton-conducting materials provide a number of advantages over commonly used fuel cells that comprise oxide-ion conductors for electrolytes, such as higher conductivity at low and intermediate temperatures, longer lifetimes, and lower costs.

However, only a limited number of such materials are known and their application to developing fuel cells has largely remained at the laboratory scale. To truly achieve a sustainable energy economy, new proton conductors with high conductivity need to be discovered that can allow the low-cost and efficient scaling up of these technologies.

Scientists from Tokyo Tech and ANSTO set out to address this need, and in a recent study, identified a new proton-conducting material that may be a representative of an entire family of proton conductors.

The material in question has the chemical formula Ba5Er2Al2ZrO13 and is classified as a "hexagonal perovskite-related oxide." Prof Masatomo Yashima, who led the study, explains: "Proton conduction in oxides typically occurs via the hopping of protons between oxide ions. Therefore, the crystal structure and the local environment around oxide ions have a tremendous impact on the possible conducting pathways. This explains why high proton conductivity has been reported in only a limited number of materials."*

Prof Yashima and his team noted that the structure of Ba5Er2Al2ZrO13 contains oxygen-deficient layers and its proton conductivity is higher than those of representative proton conductors, which are created by artificially introducing oxygen deficiencies in the crystal structures of certain materials. They realized that this intrinsic oxygen deficiency of Ba5Er2Al2ZrO13 could give it a remarkable advantage over conventional proton conductors, eliminating a major issue in them: their instability and the difficulty of synthesizing compositionally homogeneous samples.

They conducted a series of experiments to elucidate the mechanisms underlying this property. Initial investigations showed that the proton conductivity of Ba5Er2Al2ZrO13 is high at intermediate and low temperatures that are key to potential industrial applications. Upon further experimentation, it turned out that water molecules (H2O) in air can dissolve into the oxygen-deficient layers of the crystal, where the oxygen from the water is separated from hydrogen to produce mobile H+. These H+ then "hop across oxide ions" within the oxygen-deficient layers, allowing for high proton conductivity.

This phenomenon is not restricted to this particular material. The team synthesized other materials with similar structures and conducted preliminary tests on their electrical conductivity. They found comparable results to those for Ba5Er2Al2ZrO13. Assistant Dr Taito Murakami, first author of the study, explains: "Our results suggest that the oxygen-deficient layers in hexagonal perovskite-related oxides could be a general structural block that confers high proton conductivity. These layers can be found in a number of oxides besides Ba5Er2Al2ZrO13."*

This discovery of a whole new range of intrinsically high proton-conducting materials, and the mechanism of their proton conductivity, could take research in this field to new horizons. Dr James R. Hester from ANSTO, who also participated in the study, remarks: "Our work presents a potential strategy to design superior proton conductors based on the oxygen-deficient layers of some perovskite-related oxides."* This work hopefully represents a step toward a cleaner future.