Scientists at Tokyo Institute of Technology (Tokyo Tech) have developed a new and more effective catalyst for synthesizing ammonia that does not comprise rare metals. Ammonia is one of the most widely produced chemicals in the world for use as a key ingredient in many valuable chemical products such as fertilizers. It is also expected to be an efficient hydrogen carrier because it is easily liquefiable and has a high hydrogen content in the liquefied state. By exploring a new design concept based around nitrogen vacancies, they created an inexpensive catalyst from abundantly available elements that still achieves state-of-the-art performance. 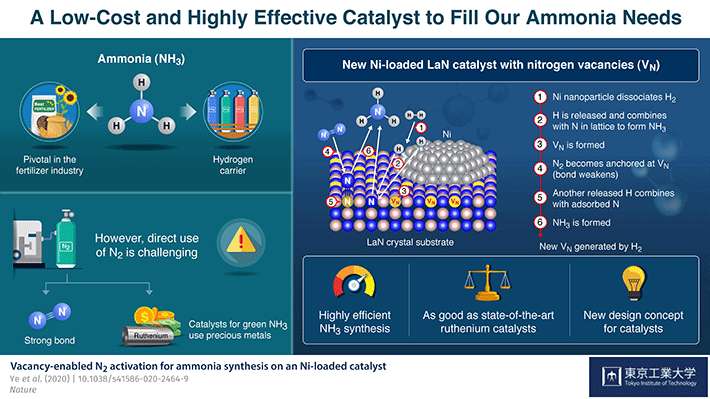 Ammonia (NH3) is one of the most commonly produced chemicals worldwide, because of its use as an important ingredient in a broad range of industrial manufacturing processes. For instance, it is pivotal in the production of fertilizers, and over 150 million tons of it are applied each year to increase the yields of various crops. Ammonia is produced naturally by many living organisms, but synthesizing it artificially using nitrogen (N2) and hydrogen (H2) gases is challenging because the strong bond between N atoms is difficult to break.

While a method to produce NH3 at the industrial scale, called the Haber–Bosch process, has existed since the beginning of the 20th century, today's best performing approach involves the use of ruthenium, an expensive and scarce metal, as catalyst to trigger the necessary reactions. Recently, Prof Hideo Hosono and colleagues from Tokyo Institute of Technology (Tokyo Tech), Japan, have developed a new strategy to produce NH3 using lanthanum (La), a much more abundant element, in combination with nickel (Ni).

In their paper, published in Nature

, they explain how they drew inspiration form a previously reported NH3 production catalyst with the formula Co3Mo3N, which bears nitrogen vacancies―locations where the presence of a nitrogen atom would be expected but that are actually empty. These vacancies were observed to make the splitting of N2 molecules easier, which led Hosono's team down a new direction of exploration for more readily available and effective NH3 synthesis catalysts. He explains: "The critical role of the nitrogen vacancies in Co3Mo3N inspired us to consider other nitrogen-containing materials on which vacancies could be generated easily as the basis for new Ni-based catalysts."

The catalyst they developed consists of LaN crystals loaded with Ni nanoparticles. The Ni easily dissociates H2 into H atoms. Thus, pre-treatment of the catalyst with H2 readily generates H atoms, which then react with the N atoms in the crystal structure to form NH3 and create N vacancies on the LaN support. Each of these empty sites then captures an N atom from an N2 molecule from the input nitrogen gas, causing the molecule's N–N bond to weaken. Another dissociated H atom breaks the weakened N–N bond to produce more NH3, leaving an N atom behind to fill the original vacancy. These cycles repeat themselves, thereby continuously generating nitrogen vacancies and sustaining the synthesis process.

This concept of a 'dual active site' catalyst turned out to be very promising. The proposed catalyst's performance far exceeds that of more conventional cobalt- and nickel-based catalysts and is comparable to even that of ruthenium-based ones: It not only consistently produces high yields of ammonia at moderate temperature and pressure, its structure is maintained even after 100 hours of continuous reaction, demonstrating its high stability.

Excited about the results, Hosono remarks: "We anticipate that our work will stimulate further exploration of catalyst designs that make use of more abundant elements. In particular, our results illustrate the potential of using vacancy sites in reaction cycles and point to a new design concept for catalysts for ammonia synthesis." Hopefully, this newfound strategy will make the production of ammonia simpler and more affordable, thus easing a multitude of significant industrial processes. 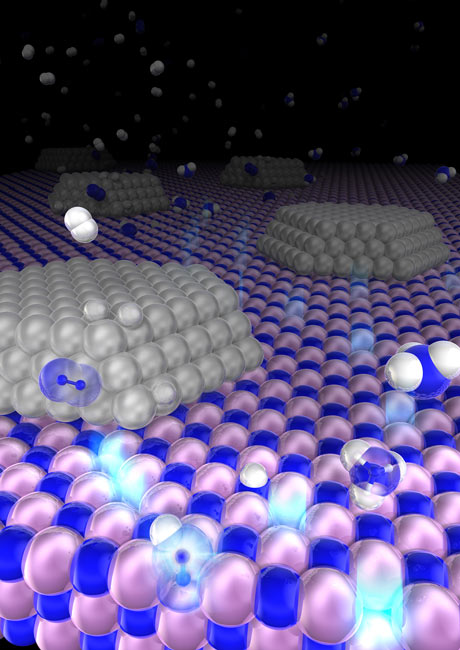