Filling the Void in Ammonia Synthesis: The Role of Nitrogen Vacancies in Catalysts

Scientists at Tokyo Institute of Technology (Tokyo Tech) explore how nitrogen vacancies in catalysts participate in the synthesis of ammonia, a pivotal chemical in the fertilizer industry. They devised a general rule for the smart design of nitride-based catalysts based on their nitrogen vacancy formation energy and created a high performing catalyst for ammonia synthesis using cerium, an abundant transition metal. 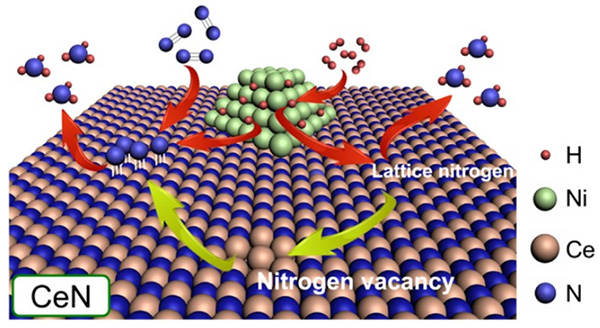 Ammonia (NH3) is a naturally occurring chemical in the environment, but its widespread use as an important ingredient in various manufacturing processes has made it one of the most produced chemicals. It is pivotal in the production of fertilizers and helps to increase the yield of various crops. Owing to its high demand, well over 150 million tons of NH3 are produced yearly. Not surprisingly, chemists have been actively looking for eco-friendly and energy-efficient ways of synthesizing NH3.

The conventional way to produce NH3 is by directly using nitrogen (N2) and hydrogen (H2) gases. But, breaking the strong bond between N atoms is challenging. This is where catalysts (materials that facilitate the necessary reactions) come into play. Unfortunately, today's best performing catalyst for NH3 synthesis requires ruthenium, a rare and expensive metal. In an effort to find alternatives, scientists from Tokyo Tech, including Dr. Tian-Nan Ye, Prof Masaaki Kitano, and Prof Hideo Hosono, have recently tried to find out exactly what makes a good catalyst for breaking N2 and producing NH3.

In a previous paper published in Nature

, Hosono and colleagues had presented a novel strategy to produce NH3 that involved the use of lanthanum nitride (LaN) coupled with nickel (Ni) nanoparticles. The key contribution of this study was the realization that nitrogen vacancies play an important role in the catalytic process, which allowed them to design a La-based catalyst with a performance comparable to that of ruthenium-based ones. In a recent study, published in the Journal of the American Chemical Society

, the research team took their findings even further and explored if the energy required to produce these nitrogen vacancies is what ultimately defines the performance of catalysts during NH3 production.

The nitrogen vacancies in the catalyst's surface can easily capture N2 and weaken its N–N bond, after which atoms dissociated from H2 at the Ni nanoparticles jump onto the protruding N atom to produce NH3. In addition, dissociated H atoms can also form NH3 directly using N atoms from the catalyst crystalline lattice itself, thus creating new nitrogen vacancies in the process. Following the success of their previous Ni/LaN catalyst, in this study, they created and compared similar catalysts with different nitrogen vacancy formation energies (ENV).

Among the catalysts tested, Ni-loaded cerium nitride (CeN) exhibited the best catalytic performance due to its relatively low ENV. The performance of the other materials tested was also directly related to their respective ENV. Excited about the results, Prof Hosono remarks, "We can now propose a general rule for the design of nitride-based catalysts for NH3 synthesis, in which their ENV dominates their catalytic performance." Most notably, the catalytic activity of Ni/CeN was comparable to that of ruthenium-based catalysts, representing a potential eco-friendly alternative made up of materials that are more abundant.

What's more, the team also noted that Ni loading on CeN was not even necessary; nitrogen vacancies in CeN can also trigger the dissociation of H2 molecules. "CeN by itself and with Ni loading were demonstrated to produce the most efficient and stable catalysts for ammonia synthesis among the different nitride catalysts we investigated," explains Ye. The team is hopeful that the insight gained from this study could be useful in applications other than ammonia synthesis too. Kitano concludes, "Understanding the role of nitrides may shed light on the design and development of efficient transition metal-based catalysts for other chemical processes." 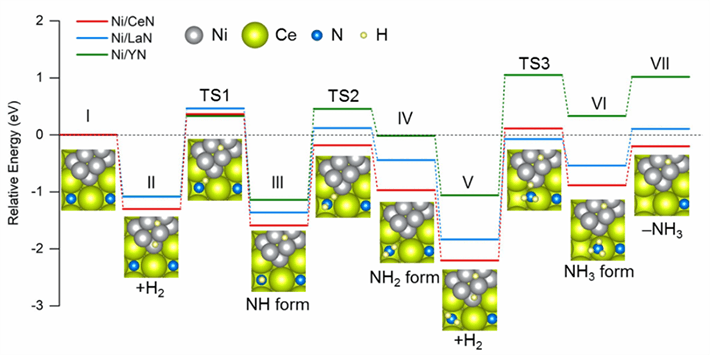 Comparative diagram of the energy required in each step during NH3 synthesis using different catalysts. Ni/CeN has the most favorable energy profile for the formation of new nitrogen vacancies, which results in better catalytic performance.