Most effort in origins of life research is focused on understanding the prebiotic formation of biological building blocks. However, it is possible early biological evolution relied on different chemical structures and processes, and these were replaced gradually over time by aeons of evolution. Recently, chemists Irena Mamajanov, Melina Caudan and Tony Jia at the Earth-Life Science Institute (ELSI) in Japan borrowed ideas from polymer science, drug delivery, and biomimicry to explore this possibility. Surprisingly, they found that even small highly branched polymers could serve as effective catalysts, and these may have helped life get started.

In modern biology, coded protein enzymes do most of the catalytic work in cells. These enzymes are made up of linear polymers of amino acids, which fold up and double-back on themselves to form fixed three-dimensional shapes. These preformed shapes allow them to interact very specifically with the chemicals whose reactions they catalyse. Catalysts help reactions occur much more quickly than they would otherwise, but don't get consumed in the reaction themselves, so a single catalyst molecule can help the same reaction happen many times. In these three-dimensional folded states, most of the structure of the catalyst doesn't directly interact with the chemicals it acts on, and just helps the enzyme structure keep its shape.

In the present work, ELSI researchers studied hyperbranched polymers – tree-like structures with a high degree and density of branching which are intrinsically globular without the need for informed folding – which is required for modern enzymes. Hyperbranched polymers, like enzymes, are capable of positioning catalysts and reagents, and modulating local chemistry in precise ways.

Most effort in origins of life research is focused on understanding the prebiotic formation of modern biological structures and building blocks. The logic is that these compounds exist now, and thus understanding how they could be made in the environment might help explain how they came to be. However, we only know of one example of life, and we know that life is constantly evolving, meaning that only the most successful variants of organisms survive. Thus it may be reasonable to assume modern organisms may not be very similar to the first organisms, and it is possible prebiotic chemistry and early biological evolution relied on different chemical structures and processes than modern biology to reproduce itself. As an analogy with technological evolution, early cathode-ray TV sets performed more or less the same function as modern high definition displays, but they are fundamentally different technologies. One technology led to the creation of the other in some ways, but it was not necessarily the logical and direct precursor of the other.

If this kind of 'scaffolding' model for biochemical evolution is true, the question becomes what sort of simpler structures, besides those used in contemporary biological systems, might have helped carry out the same sorts of catalytic functions modern life requires? Mamajanov and her team reasoned that hyperbranched polymers might be good candidates.

The team synthesised some of the hyperbranched polymers they studied from chemicals which could reasonably be expected to have been present on early Earth before life began. The team then showed that these polymers could bind small naturally occuring inorganic clusters of atoms known as zinc sulfide nanoparticles. Such nanoparticles are known to be unusually catalytic on their own.

As lead scientist Mamajanov comments, 'We tried two different types of hyperbranched polymer scaffolds in this study. To make them work, all we needed to do was to mix a zinc chloride solution and a solution of polymer, then add sodium sulfide, and "voila," we obtained a stable and effective nanoparticle-based catalyst.'

The team's next challenge was to demonstrate that these hyperbranched polymer-nanoparticle hybrids could actually do something interesting and catalytic. They found that these metal sulfide doped polymers that degrade small molecules were especially active in the presence of light, in some cases they catalysed the reaction by as much as a factor of 20. As Mamajanov says, 'So far we have only explored two possible scaffolds and only one dopant. Undoubtedly there are many, many more examples of this remaining to be discovered.'

The researchers further noted this chemistry may be relevant to an origins of life model known as the 'Zinc World'. According to this model, the first metabolism was driven by photochemical reactions catalysed by zinc sulfide minerals. They think that with some modifications, such hyperbranched scaffolds could be adjusted to study analogues of iron or molybdenum-containing protein enzymes, including important ones involved in modern biological nitrogen fixation. Mamajanov says, 'The other question this raises is, assuming life or pre-life used this kind of scaffolding process, why did life ultimately settle upon enzymes? Is there an advantage to using linear polymers over branched ones? How, when and why did this transition occur?' 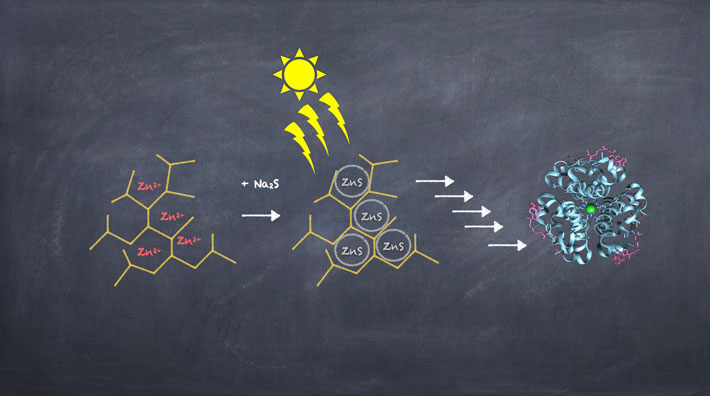