Breakthrough ammonia synthesis that does not need precious metals 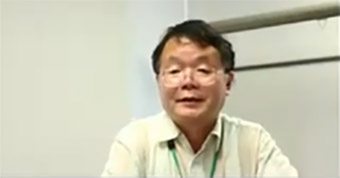 On July 14, Tokyo Tech held an online press briefing with Honorary Professor Hideo Hosono, Director of the Materials Research Center for Element Strategy. The theme was "Running on Empty: New Affordable Catalyst Relies on Nitrogen Vacancies to Produce Ammonia." Hosono introduced a revolutionary technique for synthesizing ammonia under mild conditions and without the use of precious metals. Fifteen reporters from 11 media outlets participated in the press briefing via video conferencing.

Ammonia is used as a source of nitrogen, which is needed for growing crops. Furthermore, as ammonia decomposes, it generates a large amount of hydrogen. So it may also have application as a carrier for hydrogen, which is an energy source for fuel cells and other devices.

In 1912, the Harbor-Bosch process was developed for ammonia synthesis, which led to an increase in agricultural production and a dramatic increase in population. However, the reactions in the Haber-Bosch process require high temperature (400-500°C) and high pressure (100-300 atm). Around 1970, development began on a technique for synthesizing ammonia under milder conditions. This revealed that ruthenium nanoparticles are a highly active catalyst. However, ruthenium is a precious metal. To resolve this issue, the Materials Research Center for Element Strategy has been working to develop ammonia synthesis techniques that can be performed using abundant metals.

Achievement - The coupling of lanthanum nitride and nickel

With conventional ammonia synthesis, nitrogen and hydrogen react on the surface of a metal catalyst. There, ruthenium is used because is has good nitrogen adsorption. It is well known that nickel (Ni) has low nitrogen adsorptivity and shows almost no activity. However, Hosono's team discovered that immobilizing the Ni nanoparticles on lanthanum nitride (LaN) resulted in high ammonia synthesis activity. Under the mild conditions of 1 atm at 400°C, this activity was higher than that of general ruthenium catalysts.

Based on their examination of the reaction mechanism, they theorize that the process works as follows (Fig. 1): 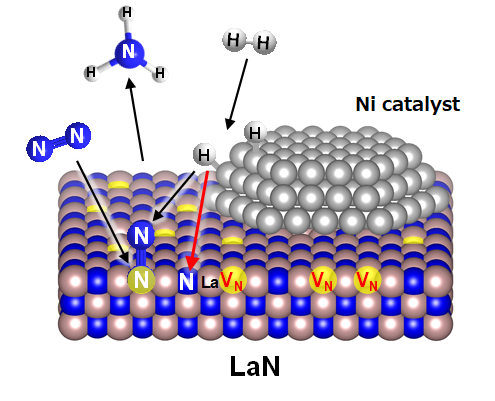 Furthermore, with their findings, they have presented the following new concepts:

Hosono and colleagues have shown that ammonia can be synthesized under conditions milder than those of the conventional method, and without needing precious metals. In the future, they hope to develop even better catalysts that do not use precious metals, and strive to achieve green ammonia synthesis.

* Nitrogen vacancies: Lanthanum nitride (LaN) is formed from La3+ and N3-, and the vacancy sites where N3- partially escapes are referred to as nitrogen vacancies. The creation of vacancies traps electrons to compensate for charge.