New research assisted by Earth-Life Science Institute (ELSI) at Tokyo Institute of Technology Professors Shawn McGlynn and Ryuhei Nakamura identified processes that might have been key in producing the first organic molecules on Earth before the origin of life. The process, which is similar to what might have occurred in some ancient underwater hydrothermal vents, may also have relevance to the search for life elsewhere in the Universe. Details of the study were published in the journal Proceedings of the National Academy of Sciences. 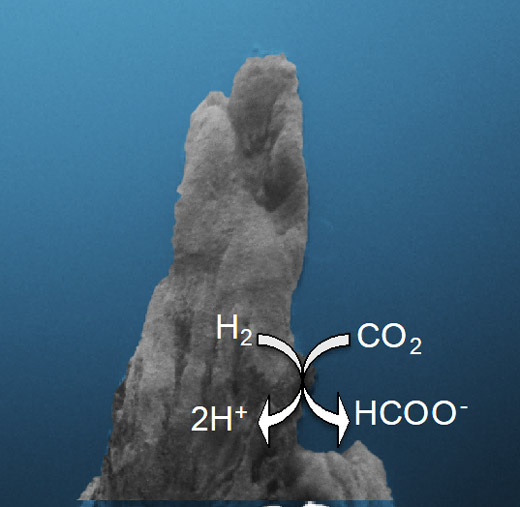 The pH difference between the inside and outside of a hydrothermal vent is sufficient to reduce CO2 with H2 in a process that may have formed the first organics required for life. Credit: Shawn E. McGlynn/ELSI

All life on Earth is built of organic molecules—compounds made of carbon atoms bound to atoms of other elements such as hydrogen, nitrogen and oxygen. In modern life, most of these organic molecules first enter the biosphere via the reduction of carbon dioxide (CO2) through several "carbon-fixation" pathways (such as photosynthesis in plants). But most of these pathways either require energy from the cell in order to work, or are thought to have evolved relatively late in the history of life. How the first organic molecules originated and became incorporated into the first cells is an open question that continues to perplex scientists.

To tackle this question, American Museum of Natural History Gerstner Scholar Victor Sojo and Professor Reuben Hudson from the College of the Atlantic in Maine devised a novel setup based on microfluidic reactors, tiny self-contained laboratories that allow scientists to study the behaviour of fluids—and in this case, gases as well—on the microscale. Previous versions of the reactor attempted to mix bubbles of hydrogen gas and CO2 in liquid but no reduction occurred, possibly because the highly volatile hydrogen gas escaped before it had a chance to react. The solution came in discussions between Sojo and Hudson, who had shared a lab bench at the RIKEN Center for Sustainable Resource Science in Tokyo, where McGlynn and Nakamura are also investigators. The final reactor was built in Hudson's laboratory in Maine.
"Instead of bubbling the gases within the fluids before the reaction, the main innovation of the new reactor is that the fluids are driven by the gases themselves, so there is very little chance for them to escape," Hudson said.

The researchers used their design to combine hydrogen with CO2 to produce an organic molecule called formic acid (HCOOH). This synthetic process resembles the only known CO2-fixation pathway that does not require an extra supply of energy, called the Wood-Ljungdahl acetyl-CoA pathway. This process resembles reactions that might have taken place in ancient oceanic hydrothermal vents.

"The consequences of these findings extend far beyond Earth's biosphere," Sojo said. "Similar hydrothermal systems might exist today elsewhere in the Solar System, for example in Enceladus and Europa—moons of Saturn and Jupiter, respectively—and in other water-rocky worlds throughout the universe."

"Understanding how carbon dioxide can be reduced under mild geological conditions is important for evaluating the possibility of the origins of life on other worlds, which feeds into understanding how common or rare life may be in the universe," added Laurie Barge from NASA's Jet Propulsion Laboratory, another co-author on the study.

The researchers turned CO2 into simple organic molecules using relatively mild conditions, which means their findings may also have relevance for environmental chemistry. In the face of the present climate crisis, there is an ongoing search for new methods of CO2 reduction to remove CO2 from the atmosphere.

"The results of this paper touch on multiple themes: from understanding the origins of metabolism, to the geochemistry that underpins the hydrogen and carbon cycles on Earth, to green chemistry applications, where this bio-geo-inspired work could help promote chemical reactions under mild conditions", added McGlynn.