Tokyo Tech to sail in nationals after 33-year drought

Three pairs from Tokyo Tech's Sailing Team have qualified for the 85th All Japan Intercollegiate Sailing Championships, to be held in Wakaura Bay in Wakayama Prefecture from November 1 to 3. Tokyo Tech will be joining the competition for the first time in 33 years.

The All Japan Intercollegiate Sailing Championships will bring together the best student sailors in Japan in both the Snipe1 and 4702 classes. Students from 24 universities, eight of which are within the Kanto region, will be competing in a total of eight races. The watermen and women from Tokyo Tech joining Japan's most prestigious student sailing competition are as follows. All three pairs will be competing in the Snipe class.

Team Tokyo Tech earned their place in the All Japan competition after hard-fought races at the 87th Kanto Intercollegiate Student Sailing Competition qualifiers on October 3 and 4, and the finals on October 11 and 17. Sailing against 14 other finalist university teams at Morito Coast in Hayama, Kanagawa Prefecture, Tokyo Tech finished eighth overall in the Snipe class, ensuring a place in the national championships. Eleventh place in the 470 class was not enough for a spot in the nationals.

The efforts of fourth-year students have played a huge part in the sailing team's success in 2020. Recent results have not only guaranteed a place in the national championships but have also ensured that Tokyo Tech is a seeded team for the finals of the Spring 2021 Kanto Intercollegiate Student Sailing Competition. A place in the latter is an ideal way to hand off the baton to the next generation of Tokyo Tech sailors. 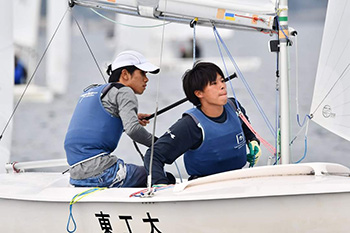 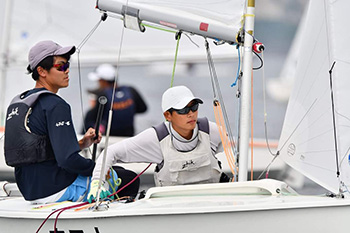 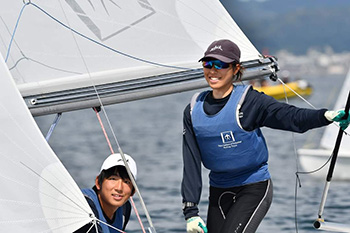 I am delighted that we achieved our goal of qualifying for the All Japan Intercollegiate Sailing Championships after four years in the sailing team. This year has been tough, as practice sessions were restricted due to the coronavirus, and at one stage even the holding of the competition was in doubt. I have no words to express the gratitude I feel towards those who continued to support our activities.

In the last four years of sailing, I have developed a mindset that allows me to push through to the end without losing sight of my goals. I will be sure to utilize this ability in my future research activities.

Sailing is a sport in which men and women battle it out on the same playing field. Still, the men outnumber the women, and I can often feel the difference in physical strength between female and male athletes. I have been determined not to be outdone by my opponents, and qualifying for the All Japan Intercollegiate Sailing Championships is the fruit of this hard work. I am very happy to have contributed to this team as a female member.

We feel enormous gratitude to all those who have supported the activities of the Tokyo Tech Sailing Team. We will do our best to demonstrate our strengths on the nationwide stage, and look forward to your support.