Scientists at Tokyo Institute of Technology (Tokyo Tech) report measurement of electrical conductivity of single DNA molecules as a way of monitoring the formation of double-stranded DNA on a gold surface. In their latest paper, they investigate the time evolution of the reaction and report findings not observed previously, demonstrating the suitability of the single-molecule approach in elucidating reaction pathways and exploring novel chemical processes. 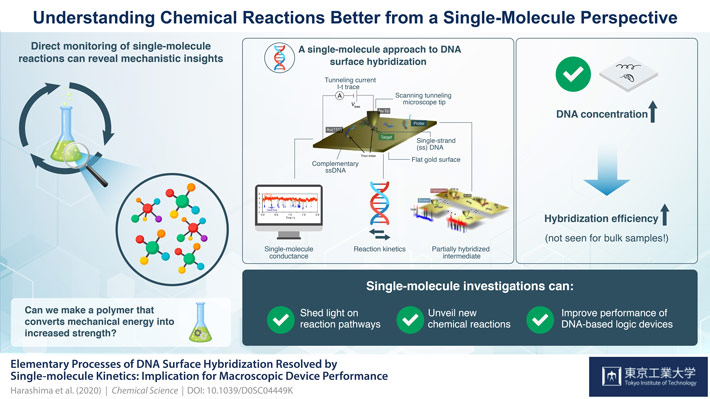 Scientists globally aim to control chemical reactions—an ambitious goal that requires identifying the steps taken by initial reactants to arrive at the final products as the reaction takes place. While this dream remains to be realized, techniques for probing chemical reactions have become sufficiently advanced to render it possible. In fact, chemical reactions can now be monitored based on the change of electronic properties of a single molecule! Thanks to the scanning tunneling microscope (STM), this is also simple to accomplish. Why not then utilize a single-molecule approach to uncover reaction pathways as well?

With this goal, scientists from Tokyo Institute of Technology, Japan decided to explore DNA "hybridization" (formation of a double-stranded DNA from two single-stranded DNA) by measuring the changes in single-molecule electrical conductivity using an STM. "Single-molecule investigations can often reveal new details on chemical and biological processes that cannot be identified in a bulk collection of molecules due to the averaging out of individual molecule behavior," explains Prof Tomoaki Nishino, who was part of the study, recently published in Chemical Science.

The scientists attached a single-stranded DNA (ssDNA) to an STM tip made of gold and used a flat gold film to stick the complementary strand on it via a process known as "adsorption." They then applied a bias voltage between the coated STM tip and the gold surface and brought the tip extremely near to the surface without touching it (Fig. 1). This, in turn, allowed a current to flow through the space in between due to a process known as "quantum tunneling". Chemists monitored the time variation of this tunneling current as the DNA strands interacted with each other.

The team obtained current traces depicting plateau regions formed of steep inclines and subsequent declines in the tunneling current. Further, these plateaus did not form when either the gold surface was not modified with ssDNA or was modified with a non-complementary strand. Based on this, scientists attributed the plateaus to the formation of a double-stranded DNA (dsDNA) resulting from hybridization of ssDNA on the STM tip and the surface. Equivalently, they attributed the abrupt decrease in current to the breakdown or "dehybridization" of the dsDNA due to thermal agitation.

The team next investigated the kinetics (time evolution of reaction) of the dehybridization and hybridization processes using experimental results and molecular dynamics simulations. The former revealed a plateau conductance independent of DNA concentration, confirming that the current measurements reflected single-molecule conductance, while the latter suggested the formation of a partially hybridized DNA intermediate that could not be detected from conductance alone.

Interestingly, the hybridization efficiency was higher for high DNA concentration samples, contradicting the findings of a previous study made with bulk ssDNA solution. Chemists attributed this observation to the absence of bulk diffusion in their study.

"These new insights should contribute to improved performance for many DNA-based diagnoses," observes Prof Nishino, excited about the findings, "In addition, our method can be extended to the investigation of intermolecular chemical reactions between a variety of single molecules, enabling a mechanistic understanding of chemical reactions as well as discovery of novel chemical reactivity from a single-molecule perspective."