The air in the United States and Western Europe is much cleaner than even a decade ago. Low-sulfur gasoline standards and regulations on power plants have successfully cut sulfate concentrations in the air, reducing the fine particulate matter that harms human health and cleaning up the environmental hazard of acid rain.

Despite these successes, sulfate levels in the atmosphere have declined more slowly than sulfur dioxide emissions, especially in wintertime. This unexpected phenomenon suggests sulfur dioxide emission reductions are less efficient than expected for cutting sulfate aerosols. A new study led by Tokyo Institute of Technology (Tokyo Tech), Hokkaido University and the University of Washington explains why.

The open-access paper was published on May 5 in Science Advances.

When concentrations of acidic sulfate from fossil fuel emissions decrease while the concentration of more basic ammonium molecules in the atmosphere stay constant, liquid water droplets in clouds become less acidic. This makes conversion of sulfur dioxide to sulfate more efficient. So, even though air quality regulations have reduced the supply of sulfur dioxide from power plants and shipping, the total amount of sulfate particulates that harm human health has dropped more slowly.

"This does not mean that the emissions reductions aren't working. It's just that there is a reaction which partially mitigates the reductions," said co-author Becky Alexander, a UW professor of atmospheric sciences. "We need to understand this multiphase chemistry in the atmosphere to design an efficient strategy to manage air pollution and accurately predict future air pollution and climate change impacts."

During most of the 20th century, sulfur dioxide emissions increased with industrialization in many parts of the world. But recently that trend has reversed in response to regulations, while ammonium emissions from animals and agriculture continue at the same rate. These trends are expected to continue.

Data from an ice core in Greenland that preserves past years' atmospheres show that the proportion of sulfate containing oxygen with one extra neutron, or oxygen-17, increased in the 1980s after countries began to regulate emissions. The authors’ analysis shows this is due to faster sulfate formation in the liquid phase in the atmosphere, which occurs largely within clouds, under less-acidic conditions.

"After the SO2 emission control, relatively lower atmospheric acidity promotes the efficiency of sulfate production in the atmosphere, which weakens the response of sulfate level to the SO2 reduction," said lead author Shohei Hattori at Tokyo Tech. "Our unique isotopic techniques applied for the Greenland ice core records identify the key process of the weakened response of sulfate to SO2 emissions reduction."

The data came from an ice core drilled in southeast Greenland (SE-Dome) as part of a project led by Hokkaido University. The oxygen trapped in this ice provided evidence of sulfate composition from 1959 to 2015, without contamination from local pollution.

"Based on a continuous and high-resolution ice core record from SE-Dome, we could obtain reliable records for atmospheric aerosols without second modification after deposition," said co-author and leader of SE-Dome ice core project Yoshinori Iizuka at Hokkaido University. "We plan to drill a second ice core at the same location this year, and try to reconstruct the aerosol history back to the 1750s."

The ice core does not contain separate data for summer and winter, but models show that other, gas-phase chemical reactions for sulfur dioxide become more important in summer, reducing the summertime impact of changing cloud acidity. Knowing how these molecules react will help improve the atmospheric models used to forecast air quality and project climate change. 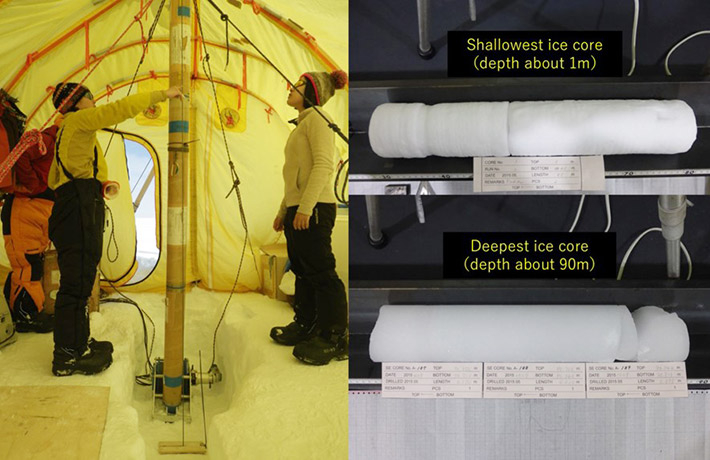 The researchers in the drilling operation (left) and the drilled samples (right).
Credit: Hokkaido University 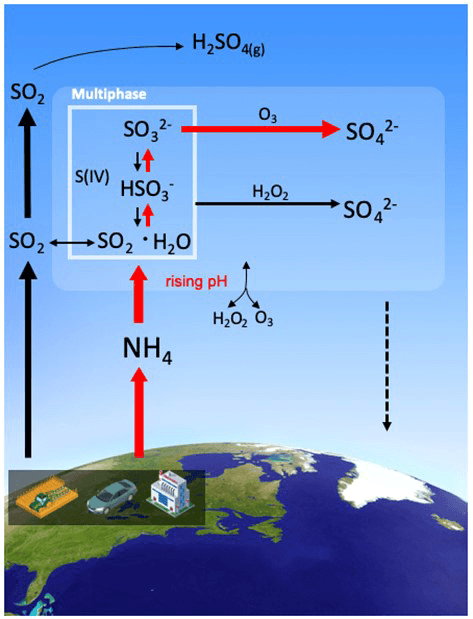