On February 18, Associate Professor Masatoshi Kondo (Laboratory for Advanced Nuclear Energy, Institute of Innovative Research, Tokyo Institute of Technology) spoke at a press webinar hosted by the Japan Association of Communication for Science and Technology. Kondo presented findings on the theme of "Going sustainable in construction - Using ‘liquid metal’ to make eco-friendly concrete." Kondo explained the cutting edge of research on reinforced concrete made with fusible metal fibers to realize a resource-recycling society. 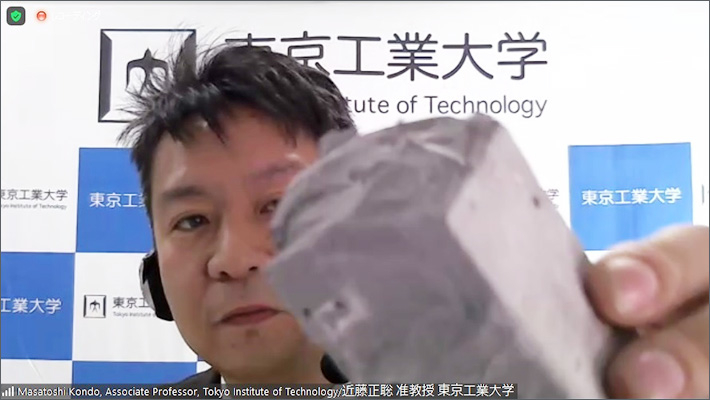 The purpose of this research is to develop a new recyclable fiber-reinforced concrete and to establish systems for implementing the new material in society. A research team was formed consisting of Kondo, who researches liquid metal technology; Associate Professor Nobuhiro Chijiwa (Department of Civil and Environmental Engineering, School of Environment and Society), specializing in civil engineering materials; and Assistant Professor Minho O (Department of Materials Science and Engineering, School of Materials and Chemical Technology), who specializes in metal chemistry. 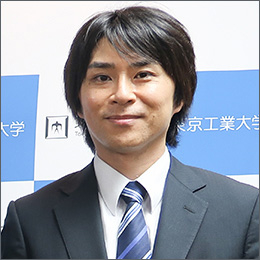 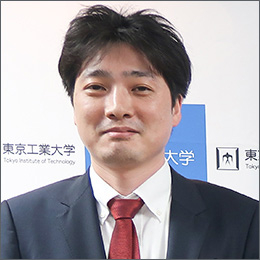 At the press webinar, Kondo introduced Ryōunkaku, which was located in Asakusa and was the largest wooden building in the Meiji Period. (Ryōunkaku was completed in 1890. It had 12 stories and stood 52 meters high.) He also introduced Roppongi Midtown, which was completed in the Heisei Period. (Roppongi Midtown was completed in 2007. It has 54 stories and stands 248 meters high). Based on the example of these two buildings, Kondo noted the rapid development of concrete architecture in Japan and the importance of concrete in modern society.

Kondo explained that the amount of waste concrete generated in Japan alone is about 30 million tons per year. This exceeds the amount of waste plastic that the country generates, which is also viewed as a serious problem at about 9 million tons per year. Kondo emphasized the problem of garbage and the need to make effective use of limited resources. Waste concrete is currently collected, separated, and recycled. Nevertheless, the majority of the recycled materials are used only as roadbed materials and have a limited use.

Fiber-reinforced concrete (FRC) has fibers of various materials dispersed throughout the concrete in order to supplement the fragile characteristics of concrete. FRC is used in many fields, but it cannot be recycled. In response, Kondo, Chijiwa, and O focused on FRC. In order to facilitate separation and recovery from waste materials, a metal with a low melting point (fusible metal) was dispersed as fibers for reinforcing the concrete. The team proposes fusible metal FRC that has been further reinforced.

The metal fibers use metals such as tin[1], aluminum[2], and their alloys with low melting points. The research team seeks to determine the strength achievable by using unique shapes for the fusible metal fibers dispersed in the concrete. Furthermore, the team hopes to enable separation and recovery of the metal fibers by heating the waste concrete, thus transforming the metal fibers into liquid.

At the press webinar, Kondo introduced the actual prototype of the newly-developed fusible FRC. He also demonstrated the melting of metal by using gallium[3], which actually melts at around 27 to 28°C. Moreover, Kondo showed results verifying the toughness[4] of the prototype material at varying levels of fiber content. He also explained how to separate the metal from the waste material. 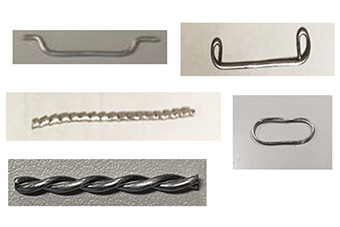 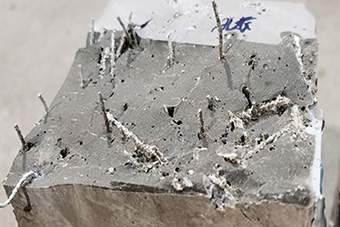 Kondo explained that because concrete is indispensable to daily life, he continues to pursue research on the circulation of concrete as a resource. He concluded his presentation by thanking the many people who provide support and embrace the challenge of innovation.

Slide presentation in English and Japanese

Video from the press webinar (in Japanese)

The Japan Association of Communication for Science and Technology (JACST) is a network transcending the boundaries of affiliated organizations. It consists of approximately 230 public relations staff from about 130 institutions such as research institutes and universities.

The press webinar held on February 18 was entitled "The Seven Samurai of Science: Confronting Global Challenges." The webinar addressed seven themes ranging from COVID-19 to the galaxy and universe. The webinar was broadcast live to media organizations in Japan and overseas. Content was simultaneously interpreted into English. 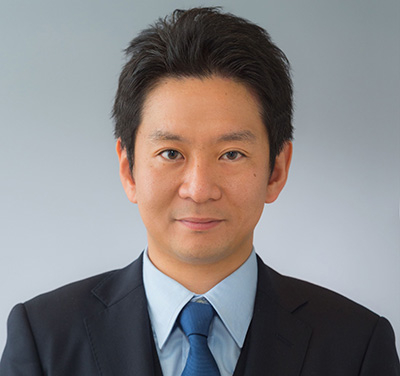 I have been researching liquid metal for more than 10 years. I have always believed that liquid metal possesses many unknown possibilities other than use as "a special refrigerant for efficient heat transmission" at energy plants and other facilities. However, I never imagined that there would be an opportunity for application in the field of civil engineering and building materials. Through an interdisciplinary research event held on the Tokyo Tech campus, I was able to form a team with Associate Professor Chijiwa, who is active in the field of civil engineering, and Assistant Professor Minho O, who is active in the field of metal chemistry. Moving forward, our team will continue developing innovative civil engineering and building materials that support the continued growth of society. We three researchers from different fields were able to meet and establish a research team thanks to cooperation from researcher administrators (URAs). URAs are specialists who support the operation of research projects. I would like to express my gratitude to the URAs Motoko Inoue, Emiko Kawaguchi, and everyone else who supports interdisciplinary research.

[1] Tin : An element with atomic number 50 and symbol Sn. It has been used for tableware since ancient times because its low melting point makes it easy to process.

[2] Aluminum : An element with atomic number 13 and symbol Al. Used in items such as beverage cans, it is a familiar element in our daily lives.

[3] Gallium : A chemical element with symbol Ga and atomic number 31. It has a low melting point of 29.8°C, so it is not used in buildings.

[4] Toughness : Toughness refers to building materials that can withstand a certain amount of load and have the ability to return to their original state without deformation or cracking. Toughness is a measurement of the tenacity of a material.