Metagenome sequencing of "tricky" gene pools has been ridden with issues during assembly of sequenced DNA fragments, which can now be addressed by a tool developed by scientists from Tokyo Institute of Technology (Tokyo Tech). This hybrid metagenome assembler tool, called MetaPlatanus, utilizes long-range sequence links and species-specific features, to deliver high quality DNA sequences. 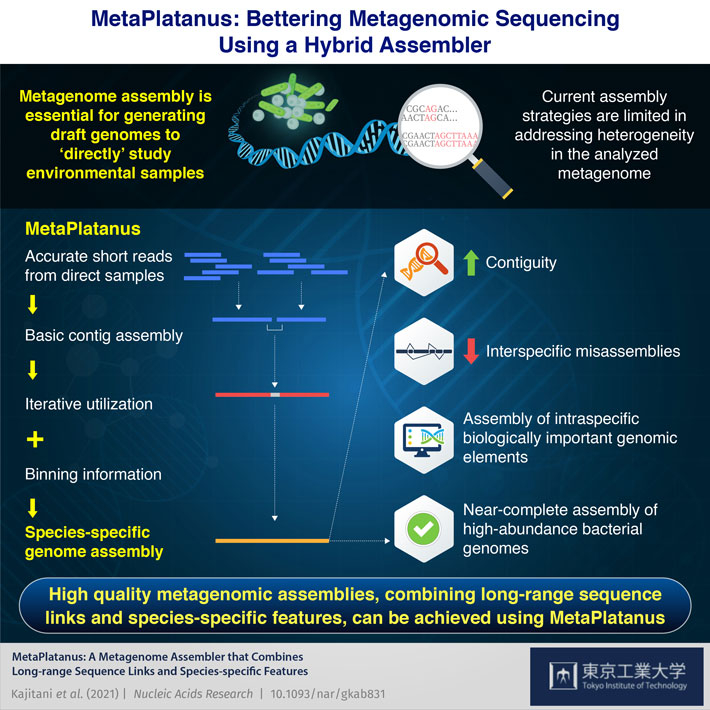 Metagenomics often involves sequencing DNA samples that can only be described as "tricky." Such DNA shows high heterogeneity, which can cause interspecies misassemblies. These misassemblies threaten the very purpose of metagenome sequencing, which is to comprehensively study the gene pool, by generating multiple draft genomes in a given sample. This issue is further complicated by the presence of certain organisms in these samples that cannot be cultured using standard microbiology techniques. How can this cascade of issues be resolved?

Scientists from Tokyo Tech now have the answer. They have developed a novel metagenome assembler called MetaPlatanus, which can generate accurate DNA sequences, including those of uncultured organisms. Their breakthrough findings have been published as a research article in Nucleic Acids Research.

Explaining the choice of inputs for MetaPlatanus-based scaffold generation, Dr. Rei Kajitani, Assistant Professor at the School of Life Science and Technology, Tokyo Tech, and the lead scientist of the study, says, "We employ a hybrid metagenome assembly method that not only utilizes the advantages of both short-range and long-range sequence reads, but also compensates for the shortcomings posed by either read lengths, and the sample itself."

He further adds, "We have applied binning to link sequences divided by regions that are hard to assemble, such as repetitive ones. Our approach is novel since the combination of binning and assembly processes have not been implemented as a public tool, so far!"

Dr. Kajitani and his team left no stone unturned in checking the accuracy of results churned out by MetaPlatanus. In this regard, they performed a process called benchmarking using mock datasets of known bacteria. Not surprisingly, MetaPlatanus gave outputs that were highly contiguous, with very few interspecies misassemblies.

Indeed, Dr. Kajitani and his team appear to have struck metagenomic gold with MetaPlatanus. Excited about the potential applications of MetaPlatanus, he exclaims, "We believe that the metagenome assembler that we have developed at Tokyo Tech could help examine the contexts of sequence elements spreading over the genome, which could have innumerable real-world applications."

Undoubtedly, this study could prove to be a milestone in the field of metagenomics.