Geophysicists detect electron dance deep inside the Earth, with a Twist

Most are aware that electrons are negatively charged particles that surround the nucleus of atoms and whose behaviour governs chemical interactions. However, it is less commonly known that electrons come in two distinct kinds: spin-up and spin-down. And the tendency for pairing between up and down spin electrons, forming "dance partners" with one another, is one of the most important behaviours affecting the electron clouds that control the chemistry of nature. Under pressures like those deep inside the Earth, the orbits in which the electrons move are squeezed, the "dance floor" changes. Electron pairs are sometimes forced to change their dance pattern and the way that they partner with one another, giving rise to what is termed an "electron spin-pairing crossover" ("spin crossover" is often used as a shorthand expression).

Top row: Tomography model map of high velocity (blue) and low velocity (red) regions at a given depth in the mantle. Middle row: The initial model is separated into its fastest (left) and slowest (right) regions. Bottom row: The separation procedure is applied to a number of different tomography models. We count the number of models that identify an area to be fast or slow which highlights regions with consistent seismic signals. Credit: Grace Shephard

Such a spin-crossover has long been predicted to occur at elevated pressures of the middle mantle (~1500 km deep) in a mineral called "ferro-periclase" that is thought to be the second-most abundant material in Earth's rocky mantle. Such predictions for a ferropericlase spin-crossover have been broadly confirmed, both by high-pressure laboratory experiments as well as computational models based on quantum mechanics. However, the predicted effects of this spin-crossover escaped seismological detection, leaving deep-Earth researchers to wonder if the predictions were flawed or if conditions in the mantle suppress the seismic expression.

A new research paper published in Nature Communications by an international research team including Earth-Life Science Institute (ELSI) Professor John W. Hernlund (Tokyo Institute of Technology) and ELSI Specially Appointed Assistant Professor Christine Houser proposes a unique seismological signature of this spin crossover in ferropericlase. The team's detection method is based on the varying behaviour of the spin crossover for P-waves and S-waves, two distinct kinds of seismic waves that propagate through the Earth. Seismologists use both of these waves (generated by earthquakes and recorded at global seismographic stations) to produce tomographic images of the mantle in a procedure that is roughly analogous to a medical CT scan. The images reveal material that propagates these two kinds of seismic waves faster or slower than the average.

Seismic images of high wave-speed features imaged at mid-mantle depths show that the P-wave signatures of prominent seismically fast features become muted in comparison to their S-wave counterparts. As it turns out, precisely this kind of behaviour is expected for rock containing plausible amounts of ferropericlase at mid-mantle conditions and is caused by a combination of the spin crossover's induced volume decrease, as well as its broadening over a wider pressure range at higher temperatures.

Encouraged by this possible connection, the research team hypothesised that if the spin crossover explains this behaviour in fast seismic features in the mid-mantle, then it should also occur for slow features at greater depths owing to the characteristics of the spin transition at high temperatures. When they looked for this signature in slow features, they again found evidence for a weakening of P-wave features relative to S-wave counterparts at the greater depths they predicted.

The research team then had to exclude the possibility that these signals in P-wave and S-wave seismic images were not simply due to resolution artefacts such as differences in the behaviours of these waves and construction of the corresponding images. They used a variety of seismic images produced by different research groups, most of them using different imaging techniques, and then compared the features that all of them agreed upon. Lead author Grace Shephard at the University of Oslo has been using the "vote map" method to answer these kinds of questions. When they calculated and plotted profiles of the abundance of fast and slow S-wave and P-wave features, the muting of features in P-wave models consistent with the spin crossover was prevalent and unmistakable.

When asked which of the pieces of evidence seemed to give the strongest support for the detection of the spin crossover, co-author Christine Houser said that all of the evidence has to be considered together. Houser added that the "relative muting of P-wave signals at two different depths for fast and slow anomalies is difficult to explain away as the result of imaging errors. While not impossible, it would be an unlikely coincidence for models assembled using different data and methods to consistently display the same seismic signals as the spin crossover."

While detecting the seismic signal of the iron spin crossover reveals regions where oceanic plates rise and sink in the deep mantle, one glaring problem remains the absence of the predicted signal in globally averaged seismic profiles of the Earth's mantle. Members of the same team previously found that this could not be explained by averaging over the same kinds of materials at different temperatures. Instead, large scale changes in chemical composition may be necessary, such as the presence of regions in the mid-mantle containing rocks that have little ferropericlase (and hence no visible signature of a spin-crossover). A previous study that several members of this research team were involved in proposed the presence of such features in the mid-mantle, which anchor the pattern of the Earth's deep mantle convection and persist over billions of years owing to their high strength. They called these "Bridgmanite Enriched Ancient Mantle Structures" or BEAMS (bridgmanite is the most abundant mineral on the Earth and is also thought to be the strongest), and speculated that they might exert a fundamental control on the pattern of tectonic plate motions over Earth's history.

The spin-crossover detection in the mantle's fastest and slowest wave speed regions highlights another critical geophysical effect. Fast regions consist of former ocean bedrock diving across the mantle on its journey to the core-mantle boundary. In contrast, slow regions consist of rocks heated by contact with the molten iron core, rising to the surface like a lava lamp. This convection process recycles rocks between the surface and the interior, powering plate tectonics. Identifying the distinct seismological signature of the spin-crossover in ferropericlase in the mantle shows that building a bridge between materials physics and geophysics is critical to understanding Earth and planetary interiors. The unique seismic signature allows us to determine which parts of the Earth's deep mantle contain more or less of the mineral ferropericlase, effectively producing 4D geologic maps and revealing Earth's history across the vast expanse of the deep interior and deep time. 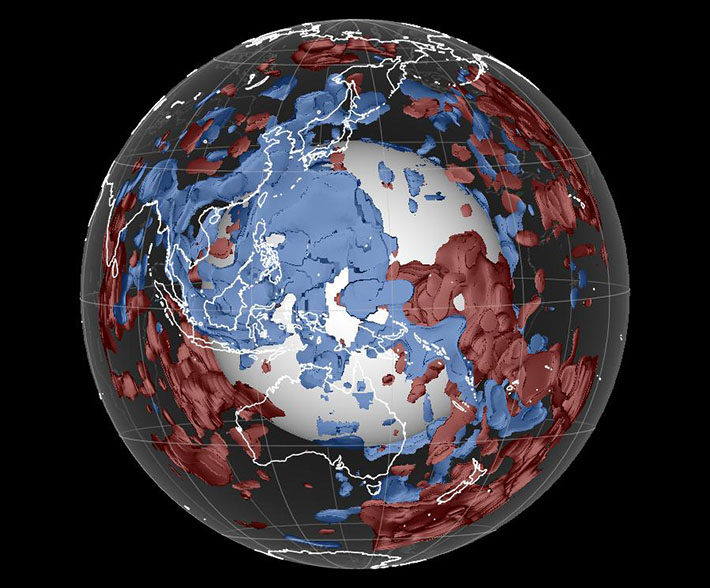 Seismic waves generated by earthquakes are aggregated to identify the fastest velocity (i.e. coldest, blue) and slowest velocity (i.e. hottest, red) regions of the mantle. Comparing results consistent between different data and techniques reveals that slabs of cold oceanic mantle bedrock, tectonic plates, pierce the mantle at subduction zones and plunge into the deepest mantle. This former oceanic rock is heated near the molten core-mantle boundary and rises back to the surface much like a lava lamp. Credit: Grace Shephard

Subducting ocean plates seen in cold, sinking (top) and warm, rising (bottom) mantle rock produce a consistent seismic signal in S-wave models, but this consistent signal disappears when comparing P-wave models. Some iron-bearing minerals are more compressible during the crossover which effects their compressible (P-wave) velocity, but not their shear (S-wave) velocity. Since P-wave models are consistent at the top and bottom of the mantle, this disappearing act appears confined to the mid-mantle where the iron spin crossover is predicted to occur. Credit: Grace Shephard