The molecular evolution of placental protein NRK and its function in regulating placental growth has finally been clarified by researchers from Tokyo Tech. They elucidated that eutherian NRK regulates placental development by a novel mechanism, modulating the CK2-PTEN-AKT pathway. They also determined that this new function was acquired due to the amazingly rapid molecular evolution of NRK in eutherian ancestors. 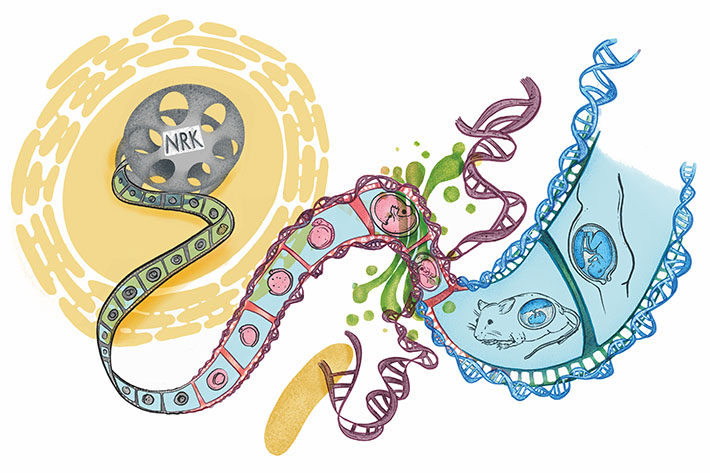 Artwork: the molecular evolution of NRK

Here, the function of NRK at each stage of evolution is depicted frame by frame of a movie film. The rightmost frame shows its involvement in the development of the mouse and human placenta. The frame of the film is a double helix structure of DNA, which gives an image of the major changes that occurred at the DNA level just before the mouse and human frames. Conceptualization by the authors. Illustration by Felipe Serrano

Viviparity is a reproductive strategy in which the mother provides the embryo with a continuous supply of nutrients in her body to grow sufficiently before giving birth. Compared with oviparity, it can increase the survival rate of fetuses and newborns. The mammalian placenta is a representative tissue for supplying nutrients to the fetus and is evolutionarily novel. NIK-related kinase (NRK) is a key protein discovered to play an important role in placental development. Previous research showed that mouse NRK is specifically expressed in the placenta, and "knocking out" this protein resulted in placental hyperplasia and difficult delivery. However, the specifics on how this was achieved were unclear.

This is soon to be an issue of the past, with a team of researchers from Tokyo Institute of Technology(Tokyo Tech) in Japan, publishing a study in Molecular Biology and Evolution, elucidating the evolutionary factors and molecular mechanisms involved in the observed functions of NRK. Elucidating these issues behind NRK function is of great importance, according to the author Assistant Professor Toshiaki Fukushima, who says, "It will not only lead to understanding some of the mechanisms of placental evolution but provide a basis for developing diagnostic and therapeutic methods for pregnancy complications, including fetal growth retardation."

To understand the evolutionary patterns involved, the team carried out synteny and phylogenetic studies on the Nrk gene in different species as it was detected across vertebrates. Interestingly, the Nrk gene sequence of eutherians was found to significantly differ from other groups, and phylogenetic analysis showed that NRK protein underwent rapid molecular evolution including amino acid insertions/substitutions in the process of evolving into eutherians at an unparalleled rate.

These evolutionary patterns gave insight into the molecular mechanisms of NRK function in eutherians. Previous studies had already confirmed that the ability to impede cell proliferation was restricted only to this form of NRK, with other members of the family proteins lacking this suppressive function. On closer examination of the protein structure, scientists were able to identify specific regions of interest. One such section identified was situated in the middle region of this protein, spanning from amino acid 565-868. Functional assays revealed that it was bound to casein kinase-2 (CK2), an inactivator of PTEN, which is a regulator of the AKT signaling pathway. Another important region identified was the citron homology domain located at the end of the protein. Through fluorescent imaging, it was discovered that this domain is crucial for the localization of NRK to the plasma membrane.

Based on the subsequent experiments, this research team revealed detailed molecular mechanism of NRK function. This protein is localized to the plasma membrane by means of the citron homology domain, where the middle region binds to CK2, thus preventing it from phosphorylating PTEN. This activated PTEN downregulates phosphatidylinositol (3,4,5)-trisphosphate, an important driving factor of AKT signaling. Reduced AKT signaling leads to attenuation of cell proliferation. CK2, PTEN, and AKT have been reported to regulate placental growth, respectively, and now it has been revealed that the placenta-specific protein NRK regulates this pathway as an upstream factor.

Importantly, the functional regions in NRK were gained in the process of evolving into eutherians. This study is the first to suggest that placental protein NRK is now control of cell proliferation signaling by getting functional sequences in the eutherian ancestors. As the author concludes, "NRK evolution facilitated the proper control of placental development in placenta mammals." This research opens up new avenues for investigating molecular evolutions for mammals to acquire the unique developmental tissue, the placenta. 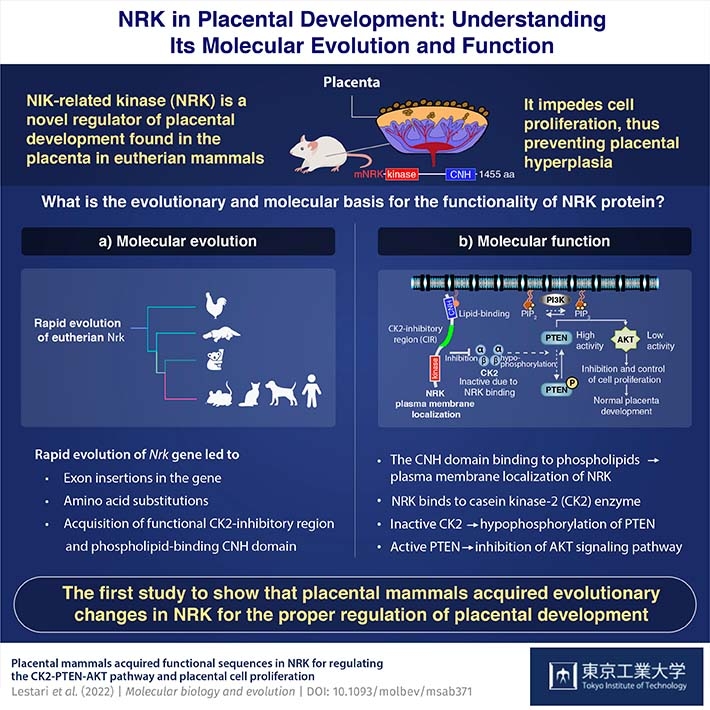