Electrochemical reactions for synthesis of organic compounds would find wider applications if they were independent of power supply. Now, researchers from Tokyo Tech have exploited the flow of electrolytes in an electrochemical reactor to generate the streaming potential for reactions without a power supply. They successfully polymerized two aromatic monomers, proving the feasibility of this setup. 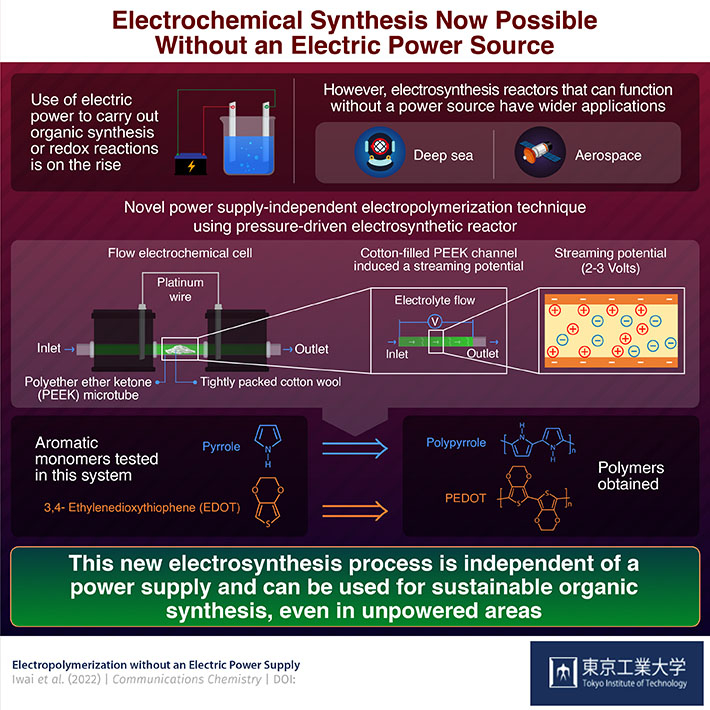 Synthesis of organic compounds and polymers is at the core of many manufacturing industries. The new "electrifying synthesis" methods that can combine conventional synthetic chemistry with electrochemistry are a step closer to a sustainable tomorrow. These reactions don’t require potentially harmful chemical reagents. They achieve organic synthesis by simply using electrons from an electric power source to conduct redox reactions.

Apart from being environmentally-friendly, these reactions can also be made more or less selective by fine-tuning the electric potentials. However, their dependence on a power supply limits their application in unpowered like aerospace and deep sea.

The solution to this self-contradictory problem was presented by a team of researchers led by Prof. Shinsuke Inagi from the Tokyo Institute of Technology (Tokyo Tech), Japan. In their recent study published in Communications Chemistry, the team provided a proof-of-concept for electrochemical polymerization of organic aromatic monomers without an external power supply. Prof. Inagi explains, "We have seen a huge leap in the development of electrochemical reactors for carrying out organic synthesis, but most of them require a power source. We wanted to build a power-independent system to make the process more accessible. And we found the answer to our quest in streaming potential-driven electrochemistry."

What exactly is this streaming potential that Prof. Inagi talks of?
When an electrolyte flows through a microchannel, a pressure difference is created due to this movement. This leads to a charge imbalance, which gives rise to a streaming potential. The team used a custom two-chambered polyether ether ketone (or PEEK) cell connected by platinum wires and a PEEK microtube for their experiments. This PEEK microtube was tightly filled with cotton wool to create a pressure drop. When they passed an electrolyte through the microtube, it generated a streaming potential that could provide enough energy for driving the desired chemical reactions.

When the cell was operated, the electrodes in the two-chambered cell experienced both upstream and downstream streaming potential, which enabled the cell to behave like something called a split bipolar electrode (BPE). This BPE setup, accompanied by the generated streaming potential of 2-3 volts was responsible for creating conditions conducive for the redox reactions of organic monomers.

To test the polymerization abilities of this setup, the team chose two aromatic organic compounds: Pyrrole (Py) and 3,4-Ethylenedioxythiophene (EDOT). Both these monomers were successfully electropolymerized into polypyrrole (PPy) and poly-EDOT (PEDOT) respectively, without using any external power source!

This new pressure-driven, environmentally-friendly, power supply-independent reactor opens up new avenues for electrifying synthesis reactions. The insights from this study can also prove valuable when designing new electrochemical reactors for the synthesis of useful organic compounds and polymers. "The entire world is trying to make essential industrial processes greener and cleaner. Since organic synthesis is at the heart of many chemical industries, we tried to develop an electrosynthesis process that requires minimum resources and contributes towards the sustainable development goals," concludes Prof. Inagi.