Yolk-Shell Nanocrystals with Movable Gold Yolk: Next Generation of Photocatalysts

Yolk-shell nanocrystals are unique materials with fascinating structural properties, such as a permeable shell, interior void space, and movable yolk. These nanocrystals are suitable for a variety of applications, depending on the choice of materials used for their fabrication.

For example, if the inner surface of their shells are reflective, yolk-shell nanocrystals can make for a reliable photovoltaic device. A mobile core can can act as a stirrer, capable of mixing solutions held within the shell. The inner and outer surfaces of the shell provide plenty of active sites for reactions, and the yolk-shell structure's fascinating properties (a result of electronic interactions and charge-transfer between the surfaces of the structure) make these nanocrystals ideal for photocatalysis applications. Understandably, yolk-shell nanocrystals have earned the attention of researchers worldwide.

Now, in a collaborative study published in ACS Applied Nano Materials, which was also selected as the ACS Editors' Choice, an international research team led by Associate Professor Tso-Fu Mark Chang and Assistant Professor Chun-Yi Chen at Tokyo Institute of Technology (Tokyo Tech) and Professor Yung-Jung Hsu at the National Yang Ming Chiao Tung University in Taiwan have developed several yolk-shell structures containing a metallic gold (Au) yolk with various semiconductor shells. Such structures have risen in popularity worldwide because of their fascinating properties, owing to their Au cores.

"Yolk-shell nanocrystals comprising of a metal yolk and semiconductor shells are particularly interesting because they can be geared to mass transport-related utilizations, for example, photocatalysis," says Professor Chen.

To make the nanocrystals, the researchers employed a sequential ion-exchange process. The procedure involves delicate sulfidation on an Au@Cu2O core-shell nanocrystal template (where Au contributes to the core, and Cu2O to the shell formation), followed by a kinetically controlled cation exchange reaction that enables conversion of the shell composition (i.e., Cu2O) into various metal sulfides, which are semiconductors. Four representative yolk-shell nanocrystal samples, including Au@Cu7S4, Au@CdS, Au@ZnS, and Au@Ni3S4, were synthesized for investigation in this way, as shown in Figure 1. 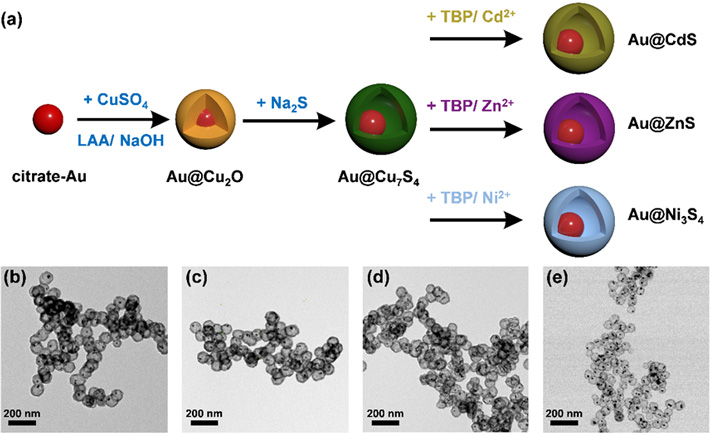 Figure 1. (a) Schematic depiction of the synthetic procedure for Au@Cu7S4, Au@CdS, Au@ZnS, and Au@Ni3S4.
(b-e) shows the corresponding TEM images.

The synthesis of yolk-shell nanostructures involves sulfidation on an Au@Cu2O core-shell nanocrystal template to convert the shell composition to various metal sulphides.

The performance of these yolk-shell structures as photocatalysts was evaluated using x-ray photoelectron spectroscopy (XPS) and steady-state photoluminescence (PL) spectroscopy.

Using XPS, the researchers found the metal cores and semiconducting shells of the nanocrystals to have electronic interactions favorable for photocatalysis applications. Time-resolved PL spectroscopy revealed the nanostructures to have high PL intensity, indicating high photocatalytic activity, implying that they were highly capable of absorbing light and generating electron-hole charge carriers (as shown in Figure 2). 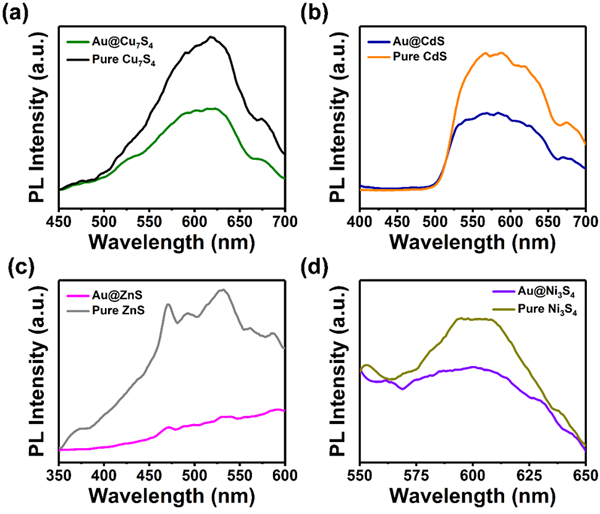 Figure 2. Steady-state photoluminescence (PL) spectra of (a) Au@Cu7S4, (b) Au@CdS, (c) Au@ZnS, and (d) Au@Ni3S4. The results of their pure counterparts are also included.

Under light illumination, the nanostructures were found to have high photoluminescence (PL) activity, revealing them to be highly capable of absorbing light and generating electrons and holes as charge carriers.

"In a real-world scenario, the reactions facilitated by separated photoexcited electrons and holes play a role in environmental purification, by producing reactive oxygen species," explains Prof. Chen, describing one scenario in which their novel yolk-shell photocatalysts could be used. These photoexcited electrons and holes can facilitate a multitude of reactions, making yolk-shell nanocrystals applicable in many fields such as environmental purification, hydrogen production, and carbon dioxide reduction.