Scientists have long been fascinated with the origin of life on Earth, namely the transition from simple pre-biotic organic molecules to living cell systems. How did these chemical reactions come about, and how did it drive the chemical evolution? Pre-biotic chemistry is the study of how organic compounds formed and self-organised in the buildup to the origin of life on Earth. Different initial pre-biotic compounds have been proposed for the polymerisation step that supposedly played the driving role in chemical evolution. According to speculations on the abiotic origin of life, pre-biotic organic compounds not relevant in modern biochemistry could also have, in fact, played an important role in chemical evolution. Thus, in 2019, researchers from the Earth-Life Science Institute (ELSI) at Tokyo Institute of Technology, Japan, first suggested protocell models based on polyester microdroplets. A new international and interdisciplinary research collaboration, led by researchers from ELSI now explores the suitable conditions for the synthesis and assembly of polyester microdroplets. Their results show that polyester microdroplets form in much wider conditions than was previously understood, making them a viable candidate as a protocell model. 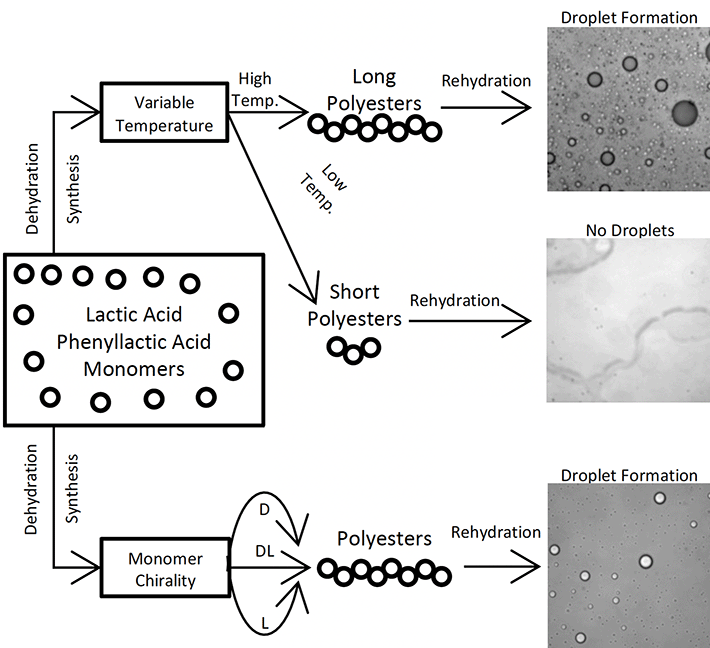 Polyester microdroplets can be formed by consecutive dehydration and rehydration following the pre-biotic synthesis of α-hydroxy acid (αHA) monomers, which could have been abundant on early Earth as a result of atmospheric discharge or meteoritic delivery. Polyester microdroplets could thus be a reasonable protocell model owing to the wide availability of αHAs on early Earth, their ease of synthesis, and functional properties. However, the early Earth environment was very diverse and chaotic, changing constantly and rapidly. In order for the polyester microdroplets to have been involved in chemical evolution, it is necessary to understand how readily available they would have been or how easily they could have formed on early Earth. While polyester microdroplet assembly formation has been demonstrated in controlled conditions in the laboratory, more detailed characterisation of this process under a wide range of environmental conditions remains to be explored.

Now, an international research collaboration team, led by researchers from ELSI, have taken the next step in understanding the origins of life. The research team looked at the effects of the temperature of the dehydration reaction and the initial the αHA monomer chirality, an important chemical property in many structural respects, on primitive polyester synthesis, polymer chain length and the subsequent assembly of microdroplets from two specific αHAs: lactic acid and phenyllactic acid. "We found that increasing reaction temperatures up to a certain amount resulted in longer polyester polymer products, while at the same time increasing the propensity of droplet assembly. We believe that droplet assembly requires long polyester products, since low temperature that resulted in short polyester products did not show droplet assembly," explains Tony Z. Jia, co-corresponding author of the paper.

The team also observed that variations in the αHA monomer chirality did not result in any clearly observable differences during the dehydration reaction for lactic acid and phenyllactic acid reactions. The polymer product length was found to be the same and the droplet assembly propensity was independent of monomer chirality. However, the authors note the caveat that the monomer chirality was only probed for two specific αHA monomer, and other monomers may behave differently.

"We even found that some partially soluble samples still formed polyester products and assembled into droplets. All of this suggests that polyester microdroplets could have formed under a much wider range of conditions than was previously thought," highlights Jia. This finding is of critical importance, as not all pre-biotic compounds were fully soluble in the solvents available on early Earth. The dehydration of partially soluble monomers can also lead to polyester formation, with subsequent rehydration resulting in droplet formation. This fact that even partially soluble chemicals could have participated in pre-biotic chemistries suggests even more conditions favorable for primitive protocell microdroplet assembly, pointing to the fact that such compartments could have been more prevalent on early Earth than previously expected.

"While we have probed some new conditions promoting primitive polyester synthesis and microdroplet assembly, our work is far from complete. We have only probed the effects of temperature and chirality for two αHA systems. There are many more prebiotically plausible αHA monomers, and it may be necessary to probe similar parameters for a wider variety of them. Overall, we are interested in further exploring this hypothesis and providing comparison and contrast with other models," concludes co-corresponding author Kuhan Chandru, who (with Jia) started preliminary experiments for this study more than five years ago at ELSI.

This work could open the door to many new experiments, such as probing differences in monomer concentration, reaction volume, etc. and, eventually, pave the way for a better understanding of how life came to be on this planet. 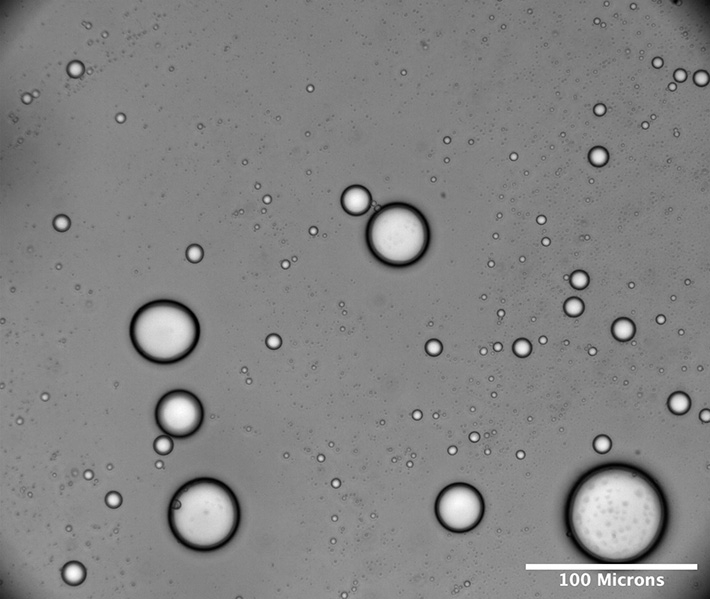 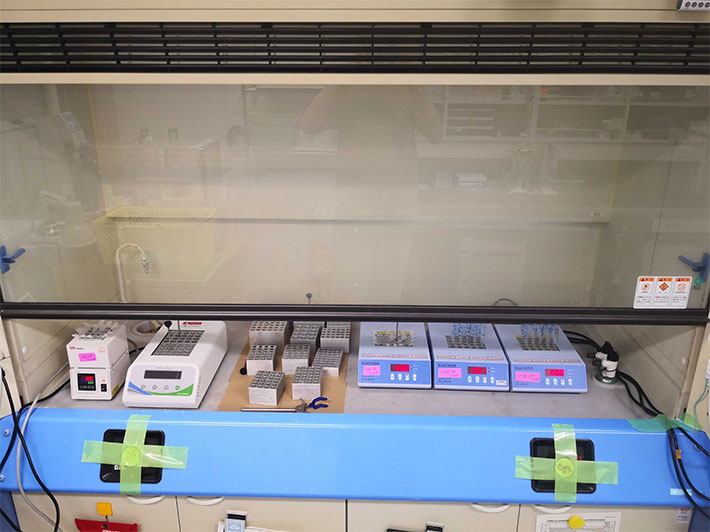