Life May Have Become Cellular by Using Unusual Molecules

All modern life is composed of cells, from single-celled bacteria to more complex organisms such as humans, which may contain billions or even trillions of cells, but how life came to be cellular remains uncertain. New research led by specially appointed assistant professor Tony Z. Jia at the Earth-Life Science Institute (ELSI) at Tokyo Institute of Technology, along with colleagues from around the world (Japan, Malaysia, France, Czech Republic, India and the USA), shows that simple chemical compounds known as hydroxy acids, which were likely common on primitive Earth, spontaneously link together and form structures reminiscent of modern cells when dried from solution, as may have happened on or in ancient beaches or puddles. The resulting structures may have helped scaffold the emergence of biological cellularity, and offer scientists a new avenue for studying early proto-biological evolution and the origins of life itself. 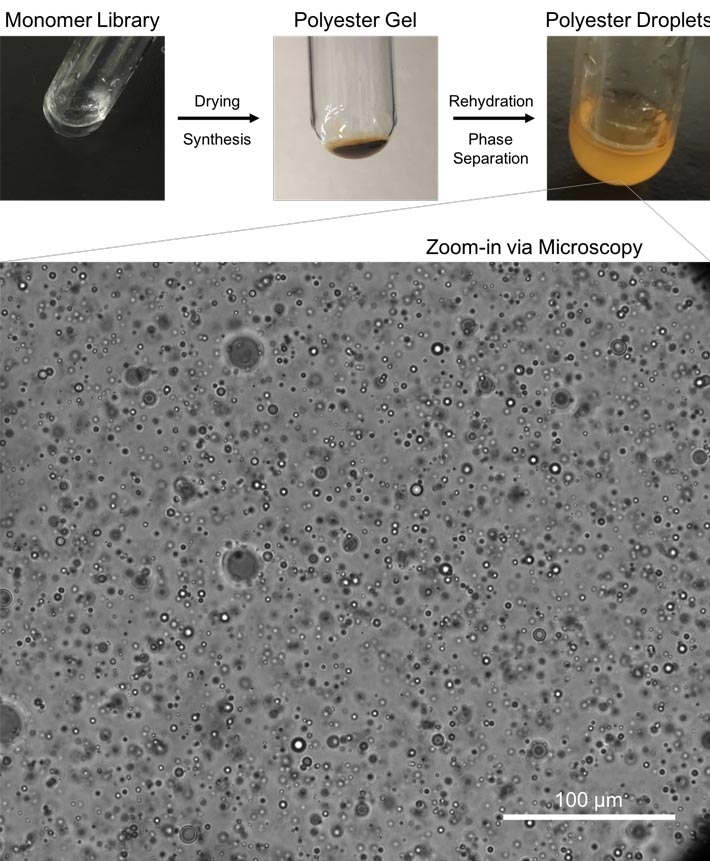 Starting from a liquid alpha hydroxy acid monomer library, drying through heating results in synthesis of polyester polymers, which form a gel-like state. This gel is then rehydrated, resulting in phase separation and formation of a turbid solution. Further microscopy analysis of this turbid solution reveals the existence of membrane-less polyester microdroplets, which have been proposed as relevant compartments on early Earth. Credit: Tony Z. Jia.

Modern cells are very complex, precisely organized assemblages of millions of molecules oriented in precise ways which help traffic materials into and out of cells in a highly coordinated fashion. As an analogy, a city is not just a random collection of buildings, streets and stoplights; rather, in an optimized city, the streets are arranged to allow for easy access to the buildings, and traffic flow is controlled to make the entire system function efficiently. As much as cities are the result of a historical and evolutionary process when primitive roving bands of humans settled down to work together in larger groups, cells are likely the result of similar processes by which simple molecules began to cooperate to form synchronized molecular systems.

How cellularization emerged is a long-standing scientific problem, and scientists are trying to understand how simple molecules can form the boundary structures which could have defined the borders of primitive cells. The boundaries of modern cells are typically composed of lipids, which are themselves composed of molecules which have the molecularly unusual property of spontaneously forming bounded structures in water known as vesicles. Vesicles form from simple molecules known as "amphiphiles," a word derived from the Greek meaning "loving both" to reflect that such molecules have propensity to self-organize with water as well as with themselves. This molecular dance causes these molecules to orient themselves such that one part of these molecules preferentially aligns with the water they are dissolved in and another portion of these molecules tend to align with one another. This kind of self-organizational phenomenon is observed when groups of people enter elevators: rather than everyone facing in random directions, for various reasons people in elevators tend to all align themselves to face the elevator door. In the experiments investigated by Jia and colleagues, the low molecular weight hydroxy acid molecules, upon joining together become a new type of polymer (that could be similar in nature to amphiphiles), form droplets, rather than the bag-like structures biological lipids do.

Modern cell boundaries, or membranes as they are called, are primarily composed of a few types of amphiphilic molecules, but scientists suspect the property of forming a membrane is a more general property of many types of molecules. As much as modern cities likely adapted roads, buildings and traffic controls to deal with the subsequent problems of handling foot traffic, horse traffic and automobile traffic, primitive cells may have also slowly changed their composition and function to adapt to changes in the way other biological functions evolved. This new work offers insights into the problems primitive emergent biological systems may have had tom adapt to.

The types of molecules that help modern cells form their boundaries are only a small subset of the types which could allow for this kind of spontaneous self-assembly behavior. Previously, Jia and colleagues showed that hydroxy acids can be easily joined together to form larger molecules with emergent amphiphilic and self-assembly properties. They show in their new work that the subtle addition of one more type of subtly different hydroxy acid, in this case one bearing a positive electric charge, to the starting pool of reactants can result in new types of polyesters that spontaneously self-assemble into still more unexpected types of cell-like structures and lends them new functions which may help explain the origins of biological cellularity.

The novel structures Jia and coworkers prepared show emergent functions such as the ability to segregate nucleic acids, which are essential for conveying heredity in modern cells, or the ability to emit fluorescent light. That such minor changes in chemical complexity can result in major functional changes is significant. Jia and colleagues suggest that by further increasing the chemical complexity of their experimental system, still further emergent functions could arise among the resulting primitive compartments that could lead to greater understanding of the rise of the first cells.

Jia notes that this work is not merely theoretical nor even just relevant to basic science research. Major COVID vaccines such as those devised by Moderna and Pfizer involve the dispersion of RNA molecules in metabolizable lipid droplets; the systems Jia and coworkers have developed could be similarly biodegradable in vivo, and thus polyester droplets similar to the ones they prepared could be useful for similar drug delivery applications. 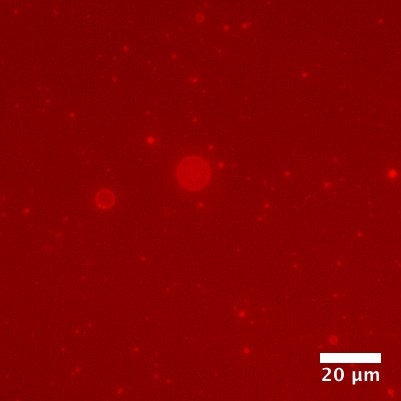 Fluorescent RNA (in red) can reside within the droplets, potentially assisted by interaction with the cationic groups that have been incorporated into the droplets. Credit: Tony Z. Jia.

Figure 3. A Snapshot of Virtual Collaboration

While much of the data was luckily acquired before the pandemic, almost all of the analysis and preparation of the manuscript occurred after the pandemic. As such, a number of online discussions between the corresponding authors occurred (Tony Z. Jia of ELSI and Kuhan Chandru of the National University of Malaysia). Credit: Kuhan Chandru.