Tokyo Tech's Laboratory for Design of Social Innovation in Global Networks (DLab) hosted a training session on September 7 for 24 staff members hired by the Institute in fiscal year 2022. The online workshop, the first collaboration of its kind between DLab and Tokyo Tech's Human Resources Division, encouraged the Institute's newest administrative and technical staff members to share their views on the future of Tokyo Tech. 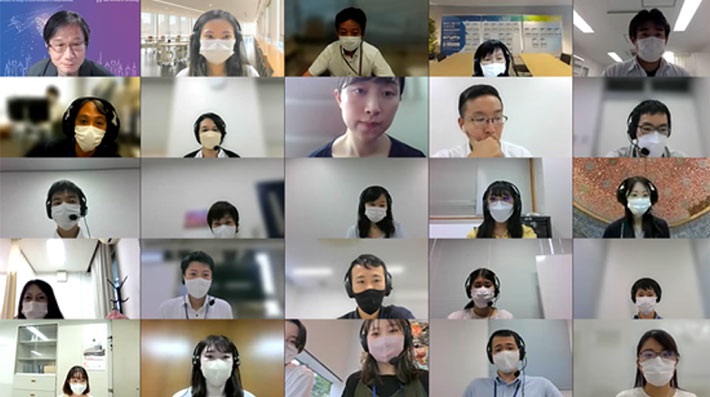 Tokyo Tech continues to enhance and expand the training programs offered to its administrative and technical staff members. One approach amidst these efforts is to bring employees into the DLab conversation soon after they join the Institute. Since its establishment in 2018, DLab sessions have brought together a diverse range of university faculty and staff members, students of all ages, working professionals, and other participants both from within and outside Tokyo Tech to discuss a better future, and to pioneer a new era through continuous dialogue with society and the discovery of hidden possibilities in science and technology.

A central question that participants explore in these discussions is "What kind of future do we truly want?" This was also the overarching topic in the September training session, facilitated by DLab member Hajime Nitta, who is Tokyo Tech's senior university research administrator and head of the Research Development Section.

The day began with a brief overview of DLab and a look at the Tokyo Tech Future Chronology, as well as a brief explanation of major DLab initiatives to date. The participants learned about DLab's insight into the future and the backcasting approach, which involves envisioning a more desirable future without being bound by predictable outcomes that are mere extensions of the present, and considering how such a future can be realized. After this, the Tokyo Tech employees shifted to collaborative group work, which was the main focus of the training session.

After splitting up into online breakout rooms of four or five members each, the participants worked in small groups to complete four sequentially set tasks with the ultimate aim of creating a vision of a better future at Tokyo Tech.

To begin with, each individual jotted down three images of an ideal Tokyo Tech and shared these ideas with group members using the online collaboration tool Miro. An important factor was to think freely about what a more desirable Tokyo Tech would be like approximately 20 years from now — a time when some of the participants might have developed into key personnel at Tokyo Tech. By the end of the first task, various ideal images of Tokyo Tech were lined up on the virtual whiteboard, including the following:

In the day's second task, each group organized their virtual post-its using the KJ method* and began identifying the relationships between each other's ideas. After this process, each group summarized their idea of a future Tokyo Tech they want under a single, concise theme, and presented this theme to the other groups. Summarized themes included the following:

Polishing and narrowing down ideas further

In 2020, DLab proposed the concept of the "transchallenge" world in which limits traditionally associated with geography, physical ability, and other factors no longer exist. In the third part of the training, the participants explored this concept, and attempted to create more concrete stories regarding the realization of their themes at a time in the future when components of the transchallenge world will have materialized.

One group's storyline, for example, featured a senior citizen who, after retirement, restarts his learning journey by becoming a Tokyo Tech student. He enjoys life and interacts online with fellow students from diverse backgrounds, receives reemployment counseling from the Institute's career support services, and actively engages with alumni, all on Tokyo Tech's virtual campus. 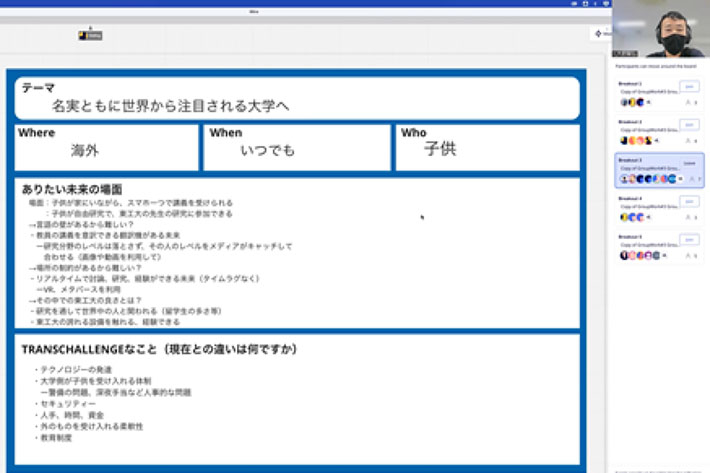 Group presentation with summary of discussions

In the fourth task, the final part of the session, participants examined the kinds of technology, social systems, and campus environment that might be necessary to realize the story they had conceived in the previous task, and compared these required elements to the status quo. After some group discussion, representatives of each group gave a presentation on their desired future Tokyo Tech and the elements necessary to realize their story.

The discussions throughout the training session were lively, and feedback from the participants was extremely positive:

Tokyo Tech strives to create impact in society through its research, talent development, and the expanding activities of DLab. Providing opportunities to envision a better future is the first step to realizing such a future, and the Institute continues to promote a wide range of activities while developing the faculty, staff, students, and alumni who make up Team Tokyo Tech.