Focused on the science of baking, this event was part of the Student Success Support Project, an initiative supported by Gurunavi Inc. Chairman and Director Hisao Taki, a Tokyo Tech alumnus. Once again, TECH Cooking Studio featured a guest patissier who demonstrated the art of sweet making while a Tokyo Tech alumnus explained the preparation processes using chemical formulas and other science-based clarifications. 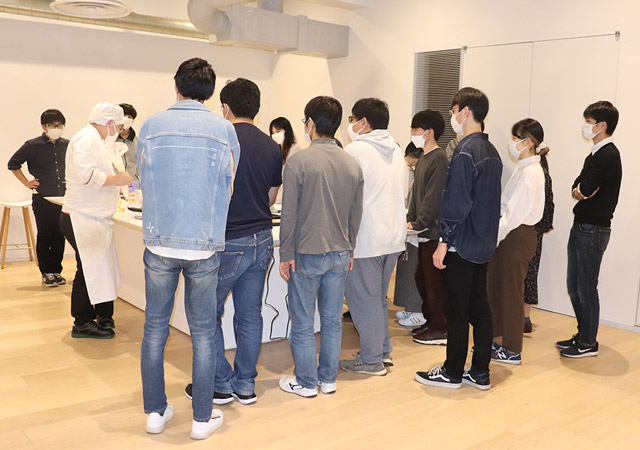 This event was joined by 40 participants on a first-come, first-served basis. All of the slots were filled soon after organizers began accepting applications. On the day of the event, participants were divided into two groups who took turns attending the Demonstration Zone, where they watched a sweet-making professional at work, and the Lecture Zone, where they got a close-up of the patissier's hands on a screen while the processes were explained using chemical formulas. More relaxed COVID-19 restrictions also meant that the event culminated in a tasting session. 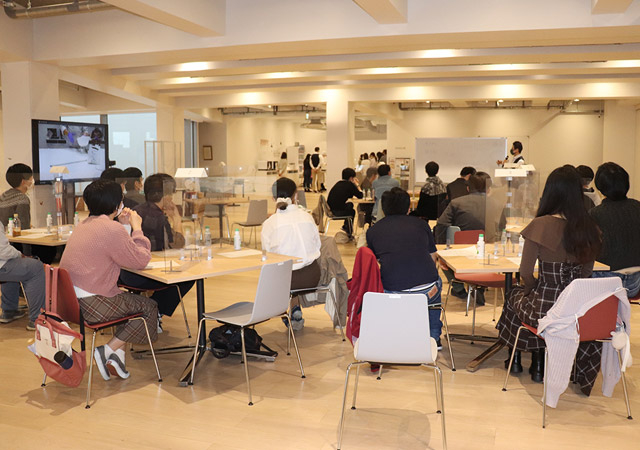 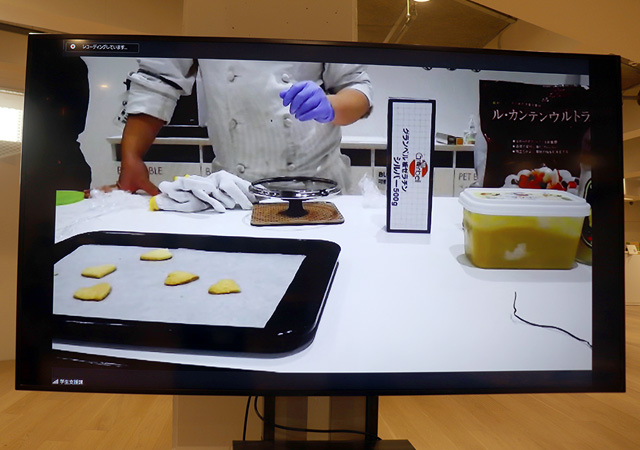 This event was led by Naoya Koizumi, a doctoral graduate from Tokyo Tech's Department of Bioengineering at the former Graduate School of Bioscience and Biotechnology who now operates Teaful co., Ltd, a cafe and patisserie in the Ookayama area, and Tetsuya Kobayashi, a patissier who works with Koizumi.

On the menu this time were cookies, two types of jelly, and a special pastry wrapping session. Patissier Kobayashi demonstrating the actual sweet making while Koizumi was in charge of the scientific explanations. 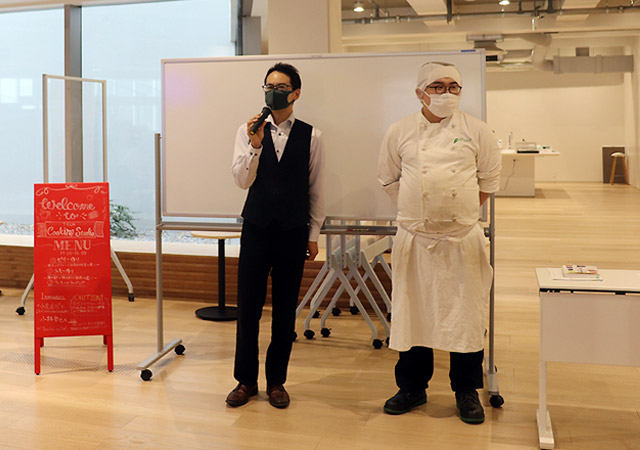 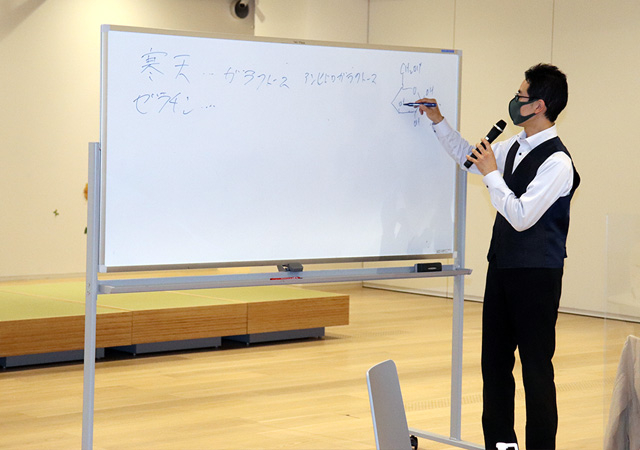 The first session was all about making tasty cookies. Participants in the Demonstration Zone learned that while the use of cake flour in cookies creates a crispy quality, bread flour brings out a firmer, more chewy texture.

"Many types of flour are sold in stores where ordinary consumers can purchase them, and all of these types are marked with their protein content. This protein content varies depending on the type of wheat used for the flour," Koizumi explained. "Gluten accounts for 70 to 80 percent of the total protein in flour, and is also the cause of allergic reactions. It is composed of two types of proteins, gliadin and glutenin. Gliadin has a firm structure and is viscous when dissolved in water. Glutenin is coiled, stretchable, and elastic when dissolved in water. Confectioneries blend cake and bread flours to achieve a suitable balance that creates a desired texture. If you understand the physical properties of these flours, you can apply them both appropriately when actually baking," he continued.

During the second session, participants watched and learned about the making of jelly using either agar or gelatin. In the Demonstration Zone, Kobayashi explained some points of caution regarding each ingredient, and shared how to use them according to their textural characteristics. "Agar hardens quickly when the temperature decreases, but gelatin takes longer to harden. Gelatin is less likely to harden when used with foods that contain hydrolytic enzymes such as kiwifruit, in which case heating can accelerate the hardening process," Kobayashi explained.

Meanwhile in the Lecture Zone, the participants were given a scientific explanation of the differences in texture and structure between agar and gelatin. "The main difference is that agar is a polysaccharide called galactose, while gelatin is a protein called collagen," Koizumi explained. "Gelatin is often made from pig skin, which is a forbidden food in some religions. This means that we have to be particularly careful regarding its use." Koizumi also added that it is better to know the physical properties of ingredients, to know your purpose, and to choose the right ingredients in order to minimize mistakes when making sweets. 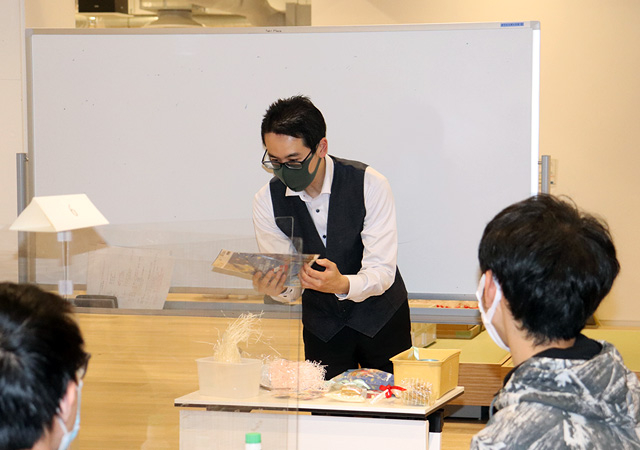 During the special wrapping session, Koizumi stressed the importance of presentation when selling products. "Even if you are just enjoying sweets at home, wrapping brings your sweet creations additional dimensions. If you are going to give sweets as gifts, wrapping is essential," Koizumi explained. He then provided the students a detailed lecture on the art of wrapping using materials available at the local 100-yen store, making it easy for the participants to recreate the sweet wrappings at home.

At the second TECH Cooking Studio, all the participants not only enjoyed the lectures and demonstrations, but also got to taste some of the sweets. By comparing the texture of the cookies made with bread flour and cake flour, and the textures of agar and gelatin, participants were able to better understand the content of the sessions through actual experience. Koizumi and Kobayashi also answered related questions that had been collected prior to the event and inquiries from participating students during the event. 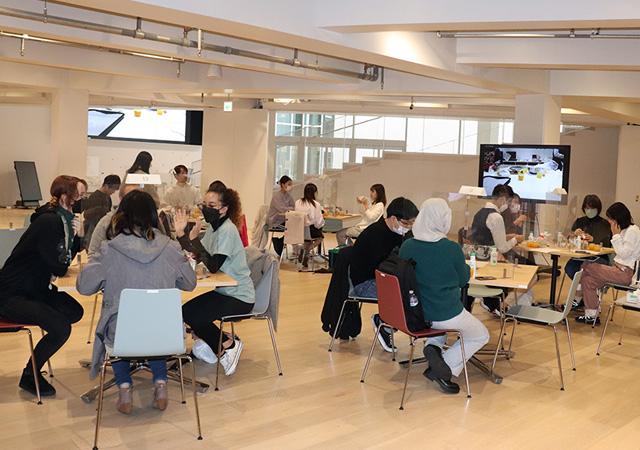 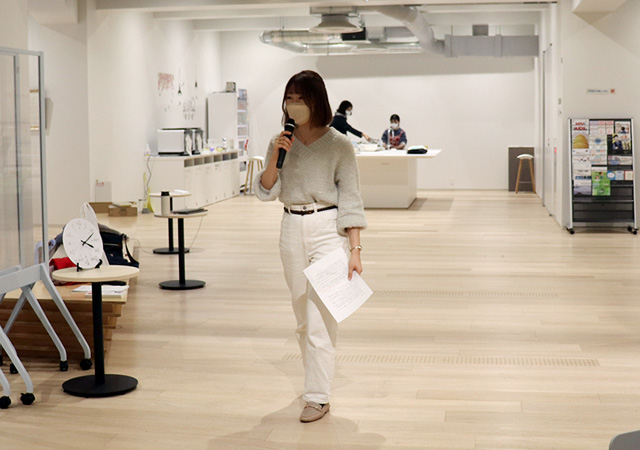