Studying Polymer Gels Through the Lens of Mechanochemistry and Solvent Swelling

Multinetwork polymer gels with color-changing linkers sensitive to mechanical stimuli provide a solid platform to study the dynamics of solvent swelling, as shown by researchers from Tokyo Tech. This innovative approach allowed them to gain detailed insight into the mechanical forces that a gel is subjected to when swollen after absorbing a solvent. Their findings will pave the way to developing new, mechanically responsive materials for many applications. 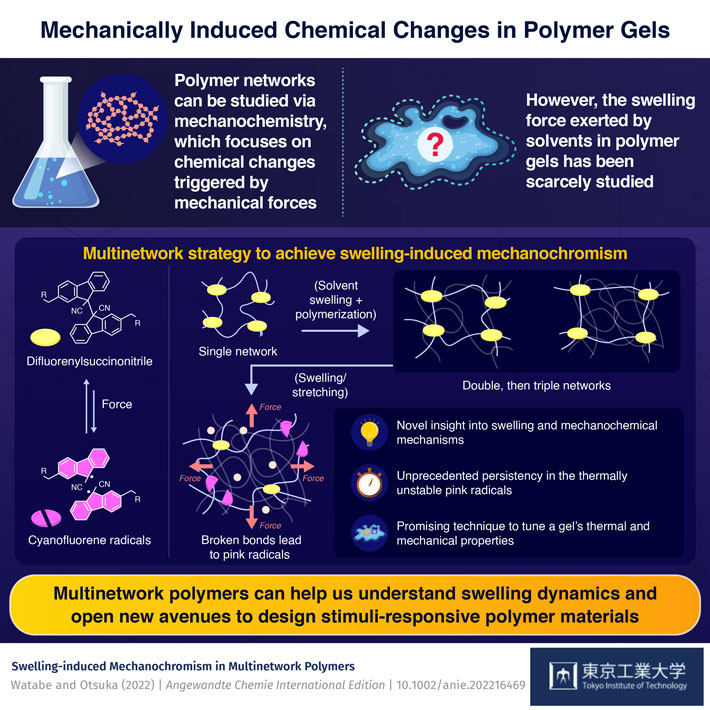 Polymer gels have become a staple technology in various fields, ranging from optics and drug delivery to carbon capture and batteries. However, there are still many open questions about gels and their network structure, which has prevented scientists from linking their remarkable macroscopic properties to specific molecular mechanisms.

One interesting way to tackle this puzzle is to study it from the lens of mechanochemistry; that is, chemical reactions that are triggered by mechanical stimuli such as compression, stretching, and grinding. To make this process easier, scientists can weave in mechanophores into polymer networks. These are molecules that undergo predictable chemical changes upon exposure to mechanical stress. While there are many ways to apply mechanical forces to activate mechanophores in a gel, one has been studied in much less detail than others: solvent swelling.

Motivated by this knowledge gap, a pair of researchers from Tokyo Institute of Technology (Tokyo Tech), Japan, decided to focus on swelling-induced mechanochromism (or a change in color induced by mechanical stimuli) in polymer gels. In their most recent study, published in Angewandte Chemie International Edition, the researchers employed an innovative strategy to make a gel very sensitive to the mechanical forces induced by solvent swelling, while also exhibiting a notable color change upon the activation of carefully selected mechanophores.

The approach in question relies on creating a multinetwork polymer. This process begins by synthesizing a first network in which the polymer chains are linked by a mechanophore called difluorenylsuccinonitrile (DFSN). Then, this first network is filled and stretched with monomers, which are the building blocks for a second network that is weaved with the first network. After repeating the previous step again and introducing a third network, the original first network ends up stretched to a point where the DFSN linkers can break by even a slight expansion in volume caused by solvent swelling. Most importantly, when the DFSN mechanophores split into cyanofluorene (CF) radicals, they take on a pink color that can be easily observed macroscopically.

With this innovative strategy, the researchers could study and compare the swelling induced by different solvents on various kinds of multinetwork polymers. They also investigated the differences in mechanical activation caused by solvent swelling and one-directional stretching, as well as the changes in the thermal reactivity of DFSN. Finally, they analyzed why the pink CF radicals were so stable even though thermodynamic theory suggested they should recombine into the original DFSN linkers over time. Worth noting, the insights gained for the polymers used in this study also apply to other compounds, as Professor Hideyuki Otsuka, corresponding author of the paper, remarks: "The studied phenomenon are not limited to multinetwork polymer systems; they can also be observed in other polymers with unique conformations, such as polyelectrolytes and topologically complex polymers."

Overall, the findings of this study shed some much-needed light on the process of swelling in polymer networks. In turn, this could lead to novel material designs, as Professor Otsuka comments: "The swelling force-induced mechanochemical reactions and enhanced thermal reactivity demonstrated in our work illustrate that the use of multinetwork polymers not only contributes to our understanding of swelling dynamics, but also opens new avenues for the design of stimuli-responsive polymer materials."

With any luck, a firmer grasp on mechanochemistry will pave the way to innovative functional gels for various applications.