Designed to develop the leadership skills and communication abilities of doctoral students and build a collaborative network between young researchers, the program brought together 39 doctoral students — 19 from Tokyo Tech and 20 from Imperial — and instructors from both universities for a five-day exchange. Students united under the theme of "Innovation to Eradicate Poverty," which correlates to the "No Poverty 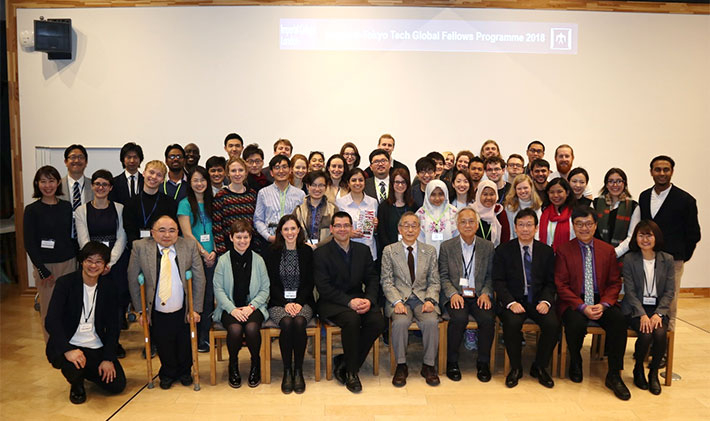 The program began with a well-thought-out welcome activity presented by lecturers from Imperial. It was the first meeting between most of those involved, but this activity gave participants a sense of unity and quickly broke the ice. After the warmup, Executive Vice President of Education* and group leader Professor Tetsuya Mizumoto introduced Tokyo Tech and offered his greetings, after which the theme of the program was introduced. Associate Professor Naoya Abe of the School of Environment and Society, who possesses deep knowledge of SDGs, then gave a special lecture entitled "Critical Review on the Relationship between Innovation and Poverty." In addition to gaining diverse perspectives on poverty around the world, the students deepened their understanding of the relationship between poverty and innovation by learning about the history of both. 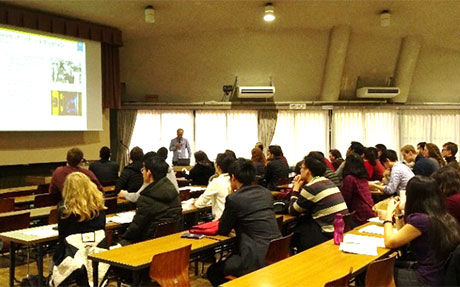 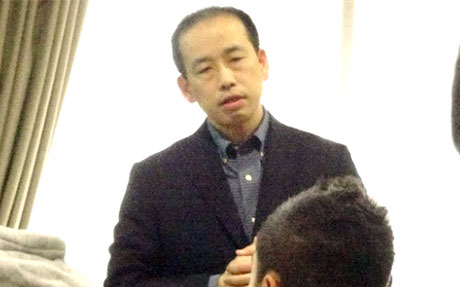 In the afternoon, participants used posters prepared in advance to introduce their research, personal hobbies, and some special skills that they could utilize during the program. Afterwards, students formed pairs and introduced their partners to everyone. Ten teams of four were then formed, mixing Tokyo Tech and Imperial students who would share time and ideas until the poster presentations on the final day. Tokyo Tech's Professor Takehiro Inohara gave the students instructions on using entakun, cardboard roundtables for brainstorming, as well as techniques highlighted in the KJ-Method so that they could complete preparations for the group discussion taking place the next day. 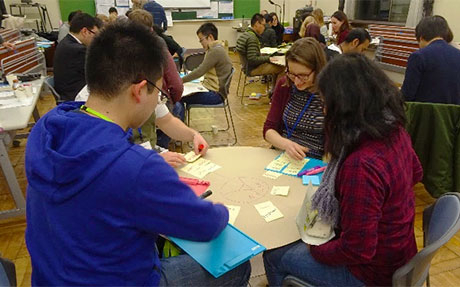 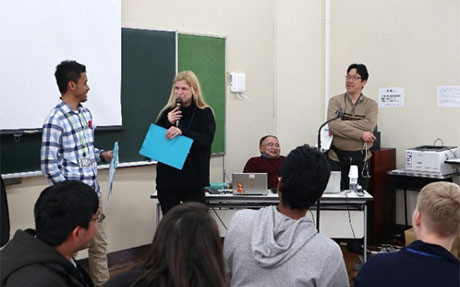 The day began with an activity designed to improve communication skills and cultivate teamwork in a diverse environment — one of the program's main objectives. Known as Team Challenge, this activity follows the group work scheme formulated by Imperial over many years in the Global Fellows Programme. It consists of five competitive team activities that challenge students to use both their brains and bodies. The teamwork born from smooth communication and trust in teammates is essential to completing each game. In addition to acknowledging the difficulty of conveying thoughts to partners in an easily understood manner, students gradually improved their teamwork by complementing each other's expertise and compensating for weak points as they worked toward a shared goal. In addition, each group received thorough feedback from the instructor in charge, allowing them to recognize their strengths and weaknesses. After this boost in their sense of unity, students then played a Q&A card game devised by Tokyo Tech Associate Professor Hironao Kaneko, with participants creating cards using the facts they independently gathered on poverty. As the game progressed, students naturally increased their knowledge about poverty-related problems. 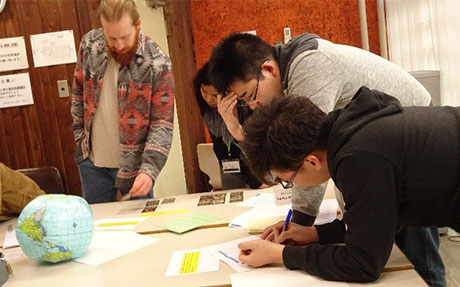 Working together to solve multiple puzzles 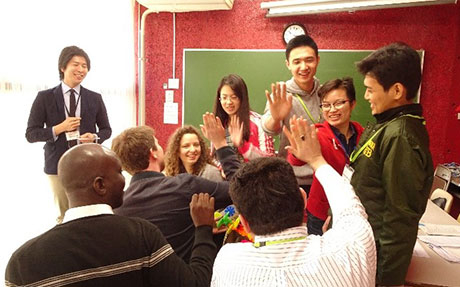 Rejoicing after completing the activity 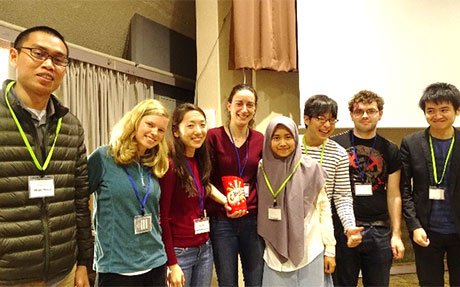 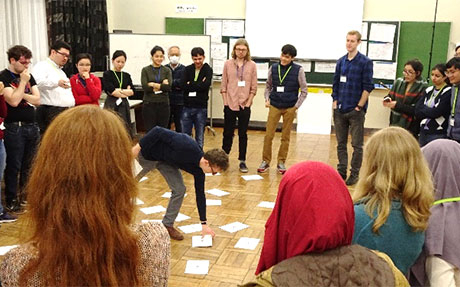 Learning about poverty through a card game

During the first morning session, Inohara gave a presentation on research ethics. With the poster for the last day due soon, he explained how to avoid creations that unintentionally violated research ethics, which everyone appeared to take very seriously.

The schedule for Day 3 also included activities to help people understand Japan. In the morning, students participated in the workshop of a local traditional performing art troupe called Hachioji Kuruma Ningyo Nishikawa Koryu. Kuruma ningyo is a unique style of puppetry in which the puppeteers sit on small boxes with three wheels and can freely move around the stage. Each puppeteer manipulates a single puppet with a height around that of a first or second-grade elementary school student. The workshop was full of many memorable experiences, as the students learned about the history of the art and its connection to Japan's ancient culture and customs. After enjoying a performance, they experienced firsthand the mechanics and handling of the puppet. Participants appeared completely enthralled by the kuruma ningyo, which use arms, legs, and the head simultaneously to demonstrate smooth movements and comical human-like facial expressions.

There was a field trip in the afternoon. Tokyo Tech students planned outings to places such as Mount Takao, Odaiba, and Akihabara, and Imperial students were able to enjoy a guided tour of one of these destinations. 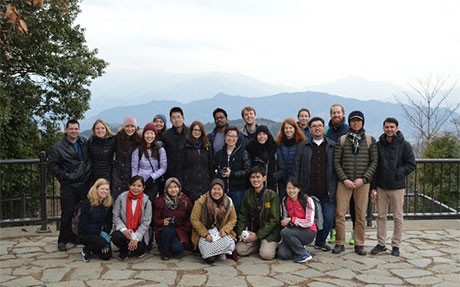 On Day 4, the representative director of Kopernik Japan, Hiromi Tengeji, was invited to give a presentation. Kopernik Japan is an organization determined to improve the lives of people in developing countries, going to regions where supplying aid is most difficult and delivering innovative technology through a combination of both nonprofit and business methods. Tengeji's presentation showed how to create a business model for sustainable aid, interweaving various examples, and clarified the relationship between business and science and technology when addressing poverty issues. The response from the students was powerful, pushing the Q&A session over the originally scheduled time until the break.

Students then separated into their teams again and held brainstorming and discussion sessions on possible solutions to poverty. While seeking the advice of instructors whenever necessary, students began making drafts of their posters for the following day. 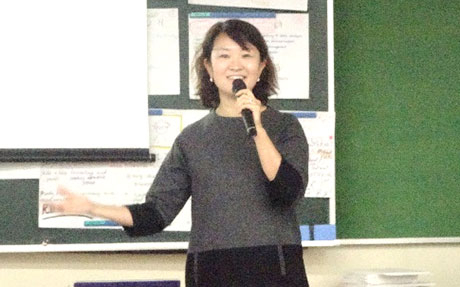 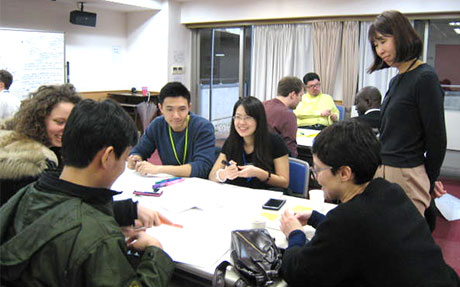 The group moved from the Inter-University Seminar House in western Tokyo to Tokyo Tech's Ookayama Campus for the final day. Students completed their posters in the morning, and the venue was humming with enthusiasm. Participants worked tirelessly to complete their group posters — the culmination of the past five days — in the short amount of time left. They were separated into two groups of five, and the first round of poster presentations got under way. Each team's presentations sparked many questions, and it was a close contest from the start. Tokyo Tech's Executive Vice President for Planning, Human Resources, and Public Relations Kiyoshi Okada, Vice President for International Affairs Hidetoshi Sekiguchi, Dean of Institute for Liberal Arts (ILA) Noriyuki Ueda, and Mizumoto were in attendance for the final presentations. The four teams that advanced to the finals showcased informative posters that overflowed with ideas, and gave passionate presentations. Okada, Mizumoto, and Imperial's Dr. Paul Seldon acted as judges, with the winning team receiving a trophy and school T-shirts from both universities. There was a friendly get-together afterwards and the students reflected cheerfully on the past week. They then reluctantly bid farewell to their new friends while promising to keep in touch. 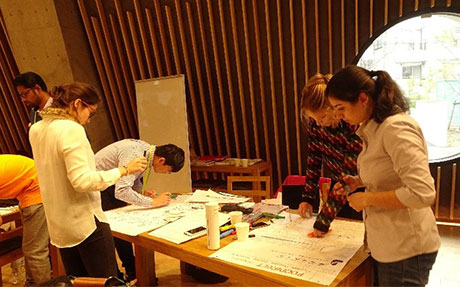 Completing final posters as a group 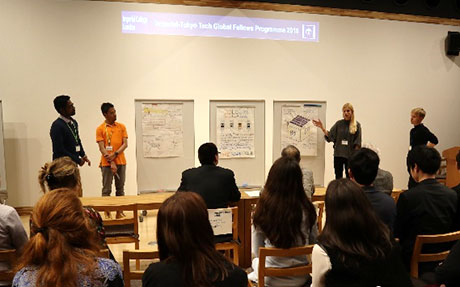 The post-program survey revealed that roughly 95 percent of the participants believed they had improved their ability to collaborate in diverse groups, and around 97 percent answered that they would recommend the program to other students. Given that this was such a meaningful program with great educational results, many are already eagerly awaiting the next program.

This program is based on the Global Fellows Programme, which Imperial has conducted for many years in collaboration with other top universities around the world. In Japan, the Imperial-Tokyo Tech Global Fellows Programme working group, established in the Education Planning Section of the Office of Education and International Cooperation at Tokyo Tech, was in charge of planning and execution. Mizumoto, along with fellow group members Inohara and Kaneko — both from ILA — adapted components of the Independent Studies Courses and Path-Breaking Liberal Arts Courses, which are doctoral-level humanities and social science courses at ILA, and developed the program further into its final form. During the program, ILA Associate Professors Yuto Koizumi and Yuta Suzuki, along with Assistant Professor Aya Kawamura, served as coaches.

*
This article has been updated to correct a typographical error on May 30.