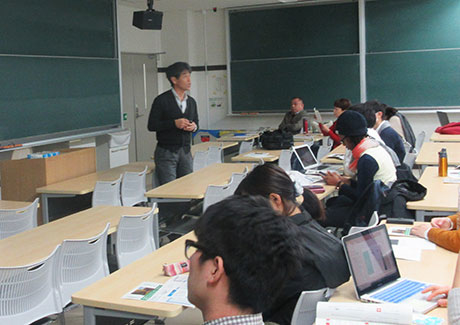 Debriefing sessions regarding the International Exchange Program of Tokyo Tech's three Schools — the School of Engineering, School of Materials and Chemical Technology, and School of Environmental and Society — were held on January 23 and February 6, 2019.

Associate Professor Jiro Takemura, Chair of the International Exchange Committee affiliated to these three Schools, delivered an opening address to kick off the sessions. After this, Specially Appointed Professor Eri Ota spoke about the Global Scientists and Engineers Course (GSEC), which offers course credits to Tokyo Tech students looking to study abroad through the program.

In the latter part of the session, students who participated in the program in the summer or fall of 2018 made presentations about their study abroad.

The Summer Exchange Research Program (SERP), initiated in 2005, involves Tokyo Tech's School of Engineering, School of Materials and Chemical Technology, and School of Environmental and Society. It allows master's or doctoral students at Tokyo Tech to join laboratories in leading universities in Europe and the US for two to three months over the summer and fall seasons. Students are expected to independently design short-term projects, which they then carry out under supervisors at their host institutions.

By the River Cam

At Cambridge, my research involved large eddy simulation of turbulent lean premixed jet flame. From an environmental point of view, high-efficiency, low-environmental-load combustors designed and development in a short period and under low costs is a necessity. I chose this research topic because large eddy simulation looks like a promising way to predict unsteady phenomena such as vibration combustion.

Through this program, I learned that English is nothing but a communication tool and it is essential to proactively develop conversation ability in order to join a group. Unlike with the exchange students who come to Japan, there seem to be few students overseas who are interested in Japan. Apparently, it is not sufficient just to be talkative, but it is also necessary to provide a foundation for conversation that attracts people and nurtures discussion. For such occasions, it is vital to ponder over various topics and have one's own opinions. If I had been able to speak more accurately in English, I might have some different impressions of these discussions.

However, I do not recommend you quit studying abroad simply because of insufficient English level. It is possible to get used to English in three months, and feelings such as frustration and shame over the period will motivate you to study English in the future. If you have a minimum level of communication skills in English and are interested in studying abroad, you should do it without hesitation. 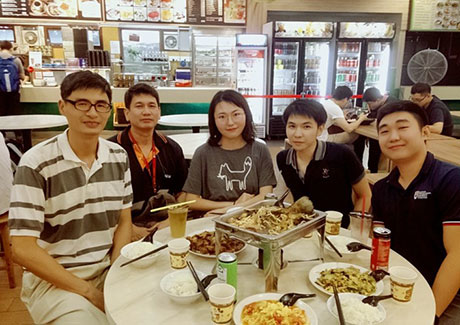 Singapore is a multicultural and multiethnic society and one of the most international countries in the world. You can make friends and experience the various cultures deeply by spending time here. I felt nervous when I arrived in Singapore because there are many people with different backgrounds and cultures, which is an unprecedented experience for me. Thus, I was afraid that I would not get along well with the surroundings. But soon, I got used to these circumstances. My lab members, who came from Thailand and India, assisted me a lot in both research and life.

I not only improved my English, but also recognized again the fun of research. This exchange was a rare experience, leaving me with an indelible impression. It brought me a broader perspective and taught me ways to overcome difficulties.

Student Exchange Program for the School of Materials and Chemical Technology

In its attempts to strengthen relationships with leading universities and research institutes, Tokyo Tech's School of Materials and Chemical Technology signed a number of agreements with institutions in Europe that now carry out students exchanges with the School. These currently include the University of Genoa, the National Research Council (CNR) in Italy, the University of Warsaw, Jönköping University, the National Metrology and Testing Laboratory (LNE) in France, and the German Aerospace Center (DLR). 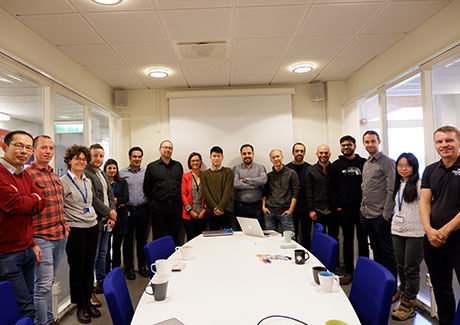 Matsumoto (center) with members of the department

It was my first time doing a three-month research stint abroad. I was concerned because my English score was equivalent to that of undergraduate students, but having said that, the time flew by and was very fulfilling. It took me a while to get used to the new circumstances where there were no Japanese students, where I had to explain my expertise in English, and where I had to cook for the first time. My continued efforts to communicate made me understand little by little what at first puzzled me, and it enlarged my circle of friends.

Sweden has a 95 percent rate of English speakers. The locals kindly attempted to pay attention to my feelings or find the proper wording for me to understand. There is no doubt that my new friends made my three months fruitful. You may lose confidence when you use are unaccustomed to suing English or cannot make friends at first, but I would like you not to spend time alone. Once having made a friend, who introduced me to another one, I ended up leaving Sweden surrounded by many friends.

Last but not least, I strongly recommend Jönköping University to those who want to do their best in research, develop new friendships, and learn English.

These debriefing sessions were an opportunity to access fresh local information through testimonials provided by participants who had just returned to Japan. Some students who had been selected to study at partner universities in the future joined the sessions to gather information before their departure.