While bringing together faculty and staff, AOTULE also hosts an annual student conference where member university students gather to present their research findings. One Tokyo Tech student recently shared his experiences from the 2018 conference, hosted by Indian Institute of Technology Madras (IITM) from November 21 to 23.

I would like to share my experiences from the 13th AOTULE Conference held in Chennai, India. AOTULE was established by Tokyo Tech in 2007 with the mission to increase student educational programs and to promote graduate engineering students' mobility in Asia and Oceania, similar to the ERASMUS program by the European Union. AOTULE consists of 13 notable universities and institutes.

The AOTULE Conference, hosted by Indian Institute of Technology Madras (IITM), was held on 21-23 November, 2018. The participating Tokyo Tech group consisted of 23 students from Japan, Indonesia, Thailand, Nepal, Bangladesh, and China, and 14 faculty and staff members. We departed from Haneda Airport and arrived at Chennai by way of Singapore, traveling around 14 hours. As a prerequisite to join this event, students were selected based on their research presentation in the Multidisciplinary International Student Workshop (MISW) held in early August 2018. After being selected, we had to attend an orientation and visa application session, which required extra care and attention.

One of the top-tier universities in India, IITM is located in Chennai, the capital city of Tamil Nadu Province. Chennai has a population of approximately 7 million, an area of 1,189 km2, and a tropical climate (28 degrees Celsius) all year round. On the first day, we were taken to the research park in IITM, where university researchers collaborate with industry to establish start-up companies. Various innovations developed by the companies are promoted by the university, as represented by the successful cooperation with many big industries in India and the world. Since the start-up companies collaborate with IITM students by solving many issues, they have offices in the research park. I was excited about the presentation of the products from several start-up companies, which included solutions in the rapidly developing 4.0 industrial era. The first day ended with a hearty dinner and opening ceremony together with several traditional Indian dances.

On the second day, there was a workshop and symposium where each student presented their research outcomes. Topics was divided into three categories, which were translating ideas for social impact, urban mobility, and smart cities. I had the chance to present my research topic, entitled "Potential Ancillary Services of Electric Vehicles (Vehicles-to-Grid) in Indonesia," which fell into the smart cities category. The participants were enthusiastic about my presentation because electric vehicles are unique devices which have recently shifted focus to alternative energy storage. Needless to say, participants also had a passion for their own research fields, and all the presentations and discussions were very active. After that, the faculty and staff members held a meeting to evaluate the achievements and future plans for AOTULE. The traditional Indian dinner prepared by the local organizing committee was delicious. Various Muslim-friendly bread and curry dishes were served by the skillful chefs.

We joined a campus and city tour on the third day. During the campus tour, we visited several innovative laboratories and facilities, including the ocean engineering research center, the national center for combustion research and development, and some campus facilities with green environments inhabited by wild animals such as deer and monkeys. I was excited about the visit to the national center for combustion research and development because it is one of the most well equipped laboratories in the world. There were several laboratory apparatuses that I had never seen, the functions of which were thoroughly explained. 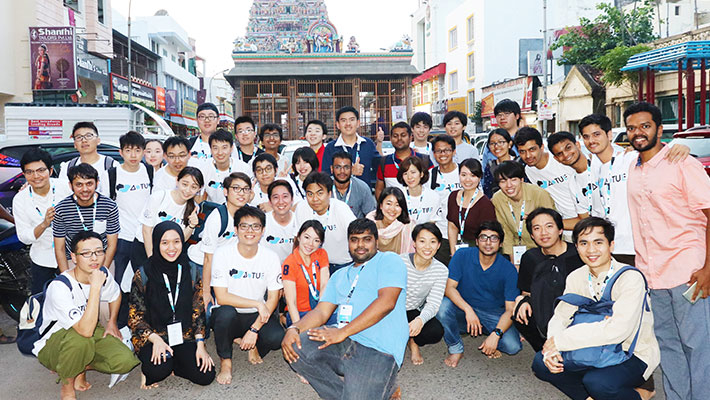 Last but not least, the event committee took us to visit some sightseeing spots in Chennai. I am from Jakarta, Indonesia, and the street view was similar to that of my hometown. However, Chennai has Marina Beach, one of the longest beaches in the world. Furthermore, we visited a Hindu temple called Kapaleeswarar Temple. Visitors needed to take off their shoes just like Hindus who came in to pray. It was very interesting to enter the Hindu praying area, which I had only seen in Bollywood films. Though our visit was short, we were impressed by the hospitality of the temple hosts. They were friendly and communicated well in English. I was very happy to be able to join the AOTULE Conference. Having made acquaintances with students from many countries, I also gained new experiences in a country I had not visited before.