Finding a needle in a haystack: Discovery of Ti2InB2 for synthesizing layered TiB

Scientists at Tokyo Tech managed to use boron as the X element in a family of materials called MAX phases, for which only carbon and nitrogen could previously be used. A clever search strategy allowed them to avoid resorting to trial and error to design this novel material, from which layered TiB can be obtained for applications in Li- or Na-ion batteries. 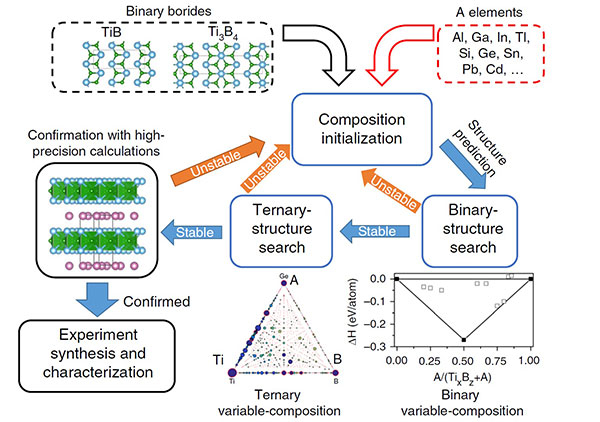 With the strategy depicted, it was possible to conduct a theoretical search with thousands of initial candidates to finally obtain the best two MAX phases for the potential synthesis of TiB MXenes, which have promising applications in fields such as nanoelectronics.

The discovery of new materials and their potential applications have long been the enablers of the sophisticated technological advances and devices that we have grown accustomed to. Considering that there are dozens of elements in the periodic table and thousands of possible combinations, it is no surprise that researchers resort to ingenious ways to predict which compounds could be synthesized in practice and would have favorable properties.

One class of useful materials is referred to as "MAX phases". These are ternary compounds consisting of three different elements represented by M, A, and X that exhibit ceramic and metallic properties. What is useful about these compounds is that they form layered structures from which the "A-layer" can be etched, leaving behind what is known as 2D MXenes. MXenes have attracted a lot of attention because they can take a number of different forms and structures and offer excellent chemical and mechanical stabilities. This makes them applicable in a wide variety of fields, such as batteries and catalysis.

Unfortunately, MAX compounds have been limited to using carbon or nitrogen for the X element… until now. A research team from Tokyo Tech, led by Prof. Hideo Hosono, studied the possibility of synthesizing MAX phases composed of titanium, indium, and boron: Ti2InB2. Motivated by the fact that borides have attracted attention for their promising applications in nanoelectronics, the team ultimately desired to synthesize TiB-based MXenes.

Because direct synthesis of layered TiB is impossible, the team first had to determine an A-element for synthesizing a MAX phase (that is, the middle element in Ti-A-B). Then, they would have to find a way to etch the A-layer from the MAX phase to obtain the coveted layered TiB. In order to determine which elements were suitable for the A in the MAX phase, they employed a clever automated search strategy through computer-assisted calculations (Fig. 1). They first analyzed the "binary" structures formed between each of the candidates for A and either TiB or Ti3B4. Those that proved stable were subjected to "ternary" calculations for determining the global stability of the ternary compound. A final verification with high-precision structural calculations was carried out for the best candidates, which finally pointed at Ti2InB2 as the best option. With this strategy, they reduced the computational cost of their search unmeasurably and demonstrated a clever approach for finding desired ternary compounds. "A feasible strategy to simplify the search for ternary compounds based on the available domain knowledge is in high demand," explains Hosono.

The team demonstrated that Ti2InB2 could be effectively synthesized, and then explored the possibility of removing In from the MAX phase to obtain the desired MX phase. Although the team did manage to obtain layered TiB from the MAX phase, its structure was not exactly compatible with that of existing 2D MXenes. However, by tuning the necessary conditions of their approach, the researchers believe that it will be possible to obtain TiB MXene in the future. Thus, they carried out a number of calculations demonstrating its superior electrical properties, hinting at its potential application as an excellent anode material for lithium- or sodium-ion batteries. "The present research will extend the fascinating class of MAX phases and MXenes," concludes Hosono. 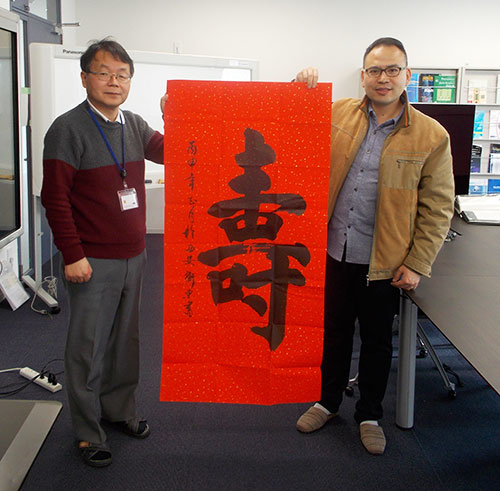