On October 28, Associate Professor Keiko Waki of the School of Materials and Chemical Technology held a press seminar at Ookayama Campus.

Solar cells convert light energy from the sun into electricity. Solar cells are commonly made of silicon, and although they are highly efficient at conversion, issues remain, including their weight and production cost.

Perovskite solar cells1, which are coated with a solution of crystalline material called perovskite, are gaining attention as the next generation of solar cells. Before they can reach practical use, however, considerations regarding power generation efficiency, scale, and durability must be solved. Another issue is that high polymer materials or gold are often used in perovskite solar cells for hole conduction2, but these materials absorb moisture and are prone to degradation. 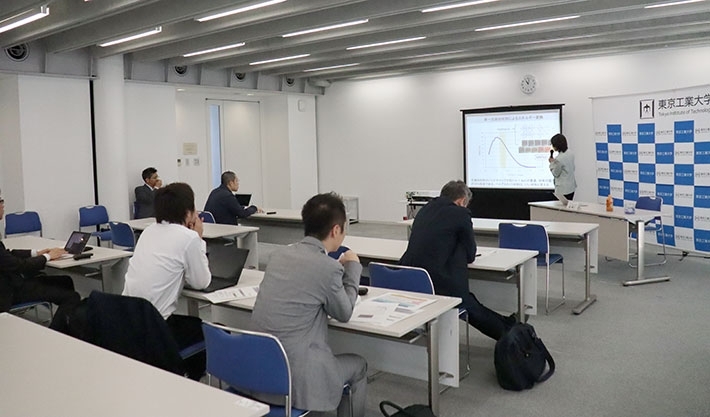 Recent research on carbon-based materials for hole conduction has led to improved stability and cost. However, power generation efficiency had not similarly improved over existing technology.

Waki and her team had long been studying multilayer carbon nanotubes. Based on that experience, they hypothesized that power generation efficiency could be improved by controlling the carbon work function through introduction of oxygen-containing functional groups such as a carboxyl (-COOH) or phenol (-OH) group into the carbon nanotube buckypaper.

It was found that, even if performance of the solar cells was not uniform immediately after fabrication, leaving them at normal temperature and pressure allowed the oxygen-containing functional groups to strengthen their interaction with the perovskite, which led to prevention of moisture from entering and reconstruction of the junction interface. The reconstruction solidified and stabilized the junction and provided the additional effect of protecting the perovskite layer from water. As a result, charge transfer resistance was reduced and stability was increased, with an initial cell efficiency of around 3% improving to 11%.

The team will work to further improve power generation efficiency and stability by, among other things, optimizing the composition and thickness of the perovskite layer and the electrode surface. This optimization will require a deeper understanding of the properties of the material, calling for further pursuit in basic research. 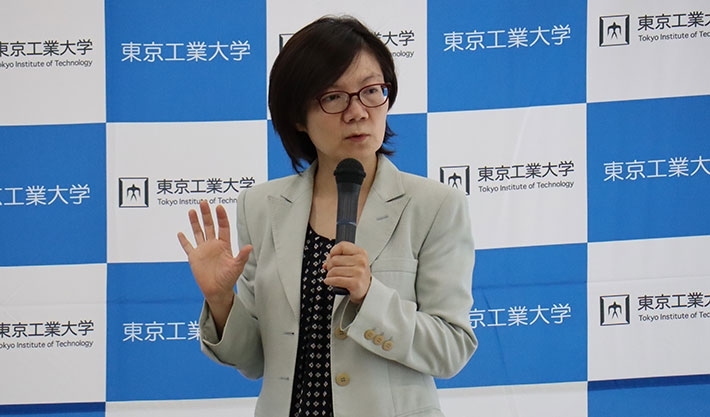 A new type of solar cell that uses crystal-structured material called perovskite to harvest light. Since it can be easily fabricated using wet processes, such as coating, it is expected to cost less than existing solar cells.

When a solar cell is hit by light (photons), the energy of the photons causes an ejection of electrons, which leave electron holes. The transfer of these causes an electric current. The electrode that collects electron holes is called the hole conduction material.

Carbon nanotubes are carbon materials in tube form with a diameter at the nanometer level. They are lightweight, resistant to bending and other forces, and conduct electricity. Buckypaper, which is carbon nanotubes in thin film form, is being studied as a material for electrodes and other applications.