In an ongoing effort to accelerate catalytic reactions, oxidation of metal complexes using light has emerged as a standard method to synthesize aromatic compounds. Now, researchers at Tokyo Institute of Technology have demonstrated a high-yield synthesis pathway through reduction of rhodium complexes, using a newly designed catalyst that enables electron-deficient elements to be added to aromatic compounds, opening up possibilities to synthesize bioactive products and functional materials. 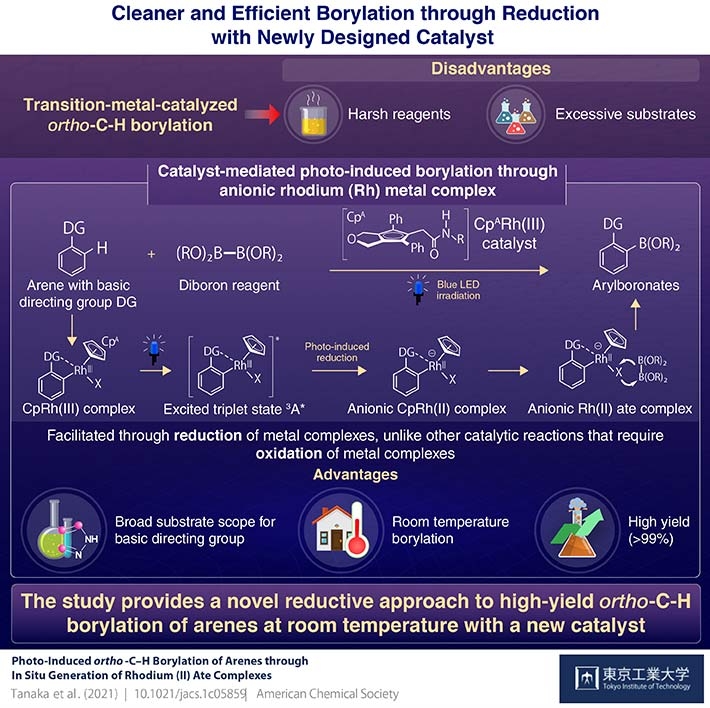 Catalysts enable chemical reactions to be faster and more energy-efficient and are widely used in industrial and biological processes. Every chemical reaction requires a certain minimum amount of energy to occur successfully. Catalysts lower this energy by combining with reactants to form low energy "intermediates," which go on to give the final product.

The metal rhodium (Rh) is a good candidate for a catalyst as they can have multiple oxidation states that allow them to form complexes or intermediates with the reactants. Recently, metal-catalyzed reactions have been optimized using light to modify the oxidation state of the intermediate compound, allowing researchers to successfully add various substituents, known as "functional groups" to arenes (hydrocarbons with carbon atoms forming rings). Most of these studies involve inducing a "cationic" (positively charged) intermediate with light that can facilitate exchange with electron-rich functional groups to yield functionalized arenes.

Now, in a new study published in the Journal of the American Chemical Society, researchers from Tokyo Institute of Technology (Tokyo Tech) have expanded the scope of light-induced metal-catalyzed reactions by demonstrating a synthesis method that uses an "anionic" (negatively charged) Rh complex to enable the addition of an electron-deficient boron group to an arene.

In their study, they used a newly designed cyclopentadienyl (Cp)-rhodium-based catalyst, which initially formed a neutral complex with the arene. This complex then underwent a "reduction" (gain of electrons) under light irradiation to form an anionic intermediate that, in turn, facilitated an exchange of a ligand (a molecule attached to a metal atom) with a diboron group to yield compounds called "arylboronates" in a process known as "borylation." Professor Yuki Nagashima, who led the study, elaborates, "Catalytic reactions are typically accelerated by oxidizing metal complexes to cationic intermediates. We, instead, used a ‘reductive’ strategy to catalyze borylation reaction of arenes through alternate reaction pathways."

The researchers initially determined the types of arenes that would form suitable intermediates with the catalyst through time-dependent density functional theory calculations and then performed a screening for the catalyst for the borylation reaction. After testing a variety of catalysts on arenes and the diboron group, they found that the neutral metal complex had to be excited to a "triplet state" with light, before it could be reduced to its anionic state to yield the corresponding arylboronate.

The new synthesis strategy worked for arenes containing a wide variety of functional groups and generated high yields (up to 99%). Furthermore, compared to the conventional metal-catalyzed borylation, it used milder reactants and allowed borylation at room temperature, making the process cleaner and more energy-efficient.

"We have developed the first protocol for generation of anionic metal complexes through photo-excited ‘reduction’ of Cp-Rh intermediates. This will pave the way for functionalization of other electron-deficient elements, such as silane and tin, as well the synthesis of bioactive and functional compounds," says Nagashima, speaking of the future prospects of their study.

After all, "reduction" is definitely better when less is more!