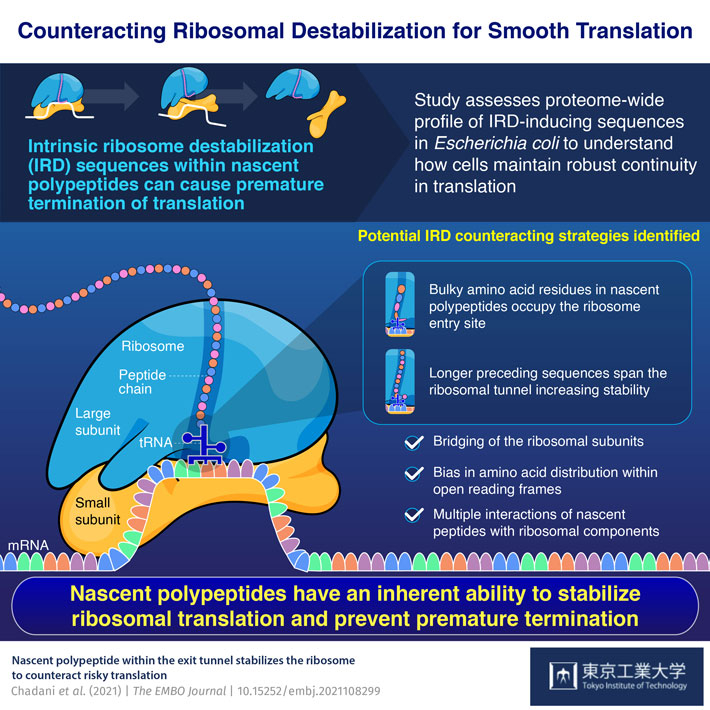 Proteins are the key players that regulate cellular structure and function. DNA, which functions as the blueprint for protein synthesis, is first transcribed into a messenger RNA (mRNA), which is further read and translated into a polypeptide chain (a "new-born" protein) by macromolecular machines called ribosomes. Here, the ribosome essentially functions as a tunnel through which the train of mRNA passes and within which amino acids are assembled in a sequential manner depending on the mRNA sequences to form a polypeptide.

Certain intrinsic sequences in the polypeptide can, however, trigger premature termination of translation. As protein synthesis is an essential cellular process, this event can pose a great risk, resulting in protein dysfunction or synthesis of incomplete proteins. In nascent (newly synthesized) polypeptides, this interrupting sequence, which is rich in negatively charged amino acid residues, is known as an "intrinsic ribosome destabilization" (IRD) sequence. With such sequences scattered across the genome, how do cells avoid such a premature termination and ensure uninterrupted translation?

A team of researchers from the Tokyo Tech, led by Professor Hideki Taguchi have now answered this key question in their recently published The EMBO Journal article. "The need for a tunnel structure is not clear, given that the primary function of the ribosome is simply to polymerize amino acids into a polypeptide. The tunnel architecture, which spans 30 to 40 nascent polypeptides in length, may have evolved to balance the stabilization and obstacles of translation elongation." explains Prof. Taguchi.

The researchers began by analyzing the proteome wide profile of the bacterial model system, Escherichia coli, and identified IRD sequences across various proteins. By constructing sequences of varying lengths preceding the IRD motifs, they were able to show that the peptide sequences that span the ribosomal tunnel can counteract destabilization by the IRD sequence in a length-dependent but sequence-independent manner. They further noted that longer sequences were associated with better IRD lowering efficiency.

Next, they went on to investigate how properties of amino acid residues in the nascent polypeptide and their distribution across the proteome influence IRD. Using various amino acid substitutions preceding the IRD sequence, they found that residues with bulkier side chains were able to prevent IRD more effectively than did smaller ones. Further, they observed a bias in the sequence of amino acids across the proteome. Interestingly, open reading frames that code for proteins were enriched in bulkier amino acid residues towards the N-terminal regions that are translated first. The researchers speculate that these bulky residues occupy the entry of the ribosomal exit site, thereby stabilizing the translating machinery by bridging the small and large ribosomal subunits. Further, on abrogating specific proteins in the ribosomal exit tunnel they found an increase in IRD, suggesting that interactions between the nascent peptide and ribosomal proteins contribute to translation continuity.

Together, these findings indicate an intrinsic regulatory mechanism wherein the nascent peptide in collaboration with the ribosomal tunnel helps maintain ribosomal stability and continuity in translation elongation.

Prof. Taguchi concludes by saying, "Our findings highlight a positive feedback system wherein the ribosomal tunnel is occupied by its own product for uninterrupted translation. We report on the role of nascent peptide chains within the ribosomal exit tunnel in ensuring efficient protein synthesis."

The quest for stability seems to have deep sub-cellular roots.