Department of Biomolecular Engineering, Graduate School of Bioscience and Biotechnology

Proteins that assist other proteins-chaperones

"As you know, once an egg is boiled and hardened by thermal denaturation, it will never be restored to its original condition. However, there is a protein in our bodies that makes something similar possible," says Taguchi with a twinkle in his eyes. Of course, a boiled egg can never return to a raw egg. However, extraordinary events do occur within life forms. This is true for not only eukaryotes such as humans, which have cell nuclei, but also procaryotes such as bacteria, which have no cell nuclei. According to Taguchi, "Chaperones are necessary for proteins to take shape and work in our bodies." It seems that these "chaperones" have an influence on protein denaturation. What exactly are chaperones? 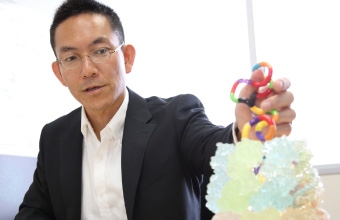 Proteins make up most of the human body. Muscles, skin, hair, nails, and even digestive enzymes could not exist without proteins. Proteins are string-shaped polymers that consist of linearly connected amino acids. These string-shaped proteins form a spatial conformation by being "folded" in order to perform their functions. Origami is a close analogy. Origami requires processes such as folding, blowing up with air, and so on to form a perfect shape. To put it simply, proteins are born with the capacity to perform these processes on their own. These processes are called folding, discovered by Christian Anfinsen[1] in the 1950s.

However, Anfinsen's results were demonstrated only in test tubes, and it was discovered later that folding doesn't occur so easily in cells. This is because amino acids, which are supposed to be hidden within proteins, are exposed in the process of folding. The exposed amino acids aggregate between molecules if left alone, and this inhibits folding. Taguchi and his colleagues have been studying a group of proteins called chaperones that prevent the aggregation of proteins and assist folding.

"Let's look at the life cycle of a protein, from its synthesis to degradation. Suppose that the stage in which the protein is synthesized based on the genetic information of DNA is its birth. Then, it matures by folding, moves to different places, suffers stress under pressure, ages into a filamentous protein called amyloid, and eventually faces death. We now know that chaperones support proteins in every stage of their life cycle. They are indispensable for proteins to take shape and properly perform their functions."

Shifting from chemistry to life sciences driven
by fascination with protein

Though Taguchi is now a leading researcher on chaperones, he wasn't always interested in bioscience. After entering Tokyo Tech, he initially studied applied chemistry, which had nothing to do with bioscience. He devoted himself to the research of organic synthesis in the Department of Chemical Engineering. However, his interest greatly shifted to bioscience with the discovery of the helix structure of DNA, one of the greatest discoveries of the 20th century. As he got absorbed in reading the book The Double Helix written by James D. Watson, one of the discoverers of the DNA-helix, he became more and more drawn into the drama that unfolded behind the scenes of the great discovery. 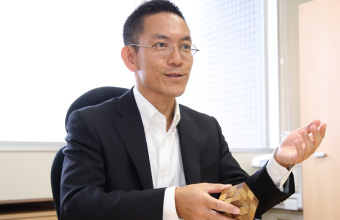 Having made up his mind, Taguchi changed his major and decided to pursue a master's degree in bioscience. He moved from Ookayama to Suzukakedai Campus and entered the laboratory of Tairo Oshima, the dean of the graduate school at that time, who significantly contributed to the establishment of the Graduate School of Biosciences and Biotechnology. He joined the laboratory with excitement; however, he was completely in the dark about where to start his research. That's when Masasuke Yoshida, an assistant professor at that time, approached him and asked him if he would like to conduct research on an interesting protein that had just been discovered. Taguchi looks back and says with a laugh that he would have never thought that this "interesting protein," chaperone, would later become his main research topic.

"At the time I started my research, the mechanisms of chaperones were not known at all. Perhaps that was lucky for me. The subject was just starting to attract attention worldwide, and I was able to work at the frontier of a cutting-edge field." 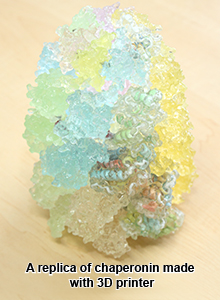 There is a wide variety of chaperones. The type that Taguchi initially studied was chaperonin. Chaperonin is one of the most typical chaperones that supports the folding of proteins, which is essential to every cell.

Research on chaperonin has been advanced globally, and it is said that a type of chaperonin called GroEL, found in Escherichia coli, assists the folding of hundreds of proteins in cells. Details regarding the mechanism of action of chaperonins have been discovered, but there are still many things, such as their functions within cells, that remain unknown. Taguchi has also been investigating the mechanism of protein-based infectious agents called prions, which alter the conformation of proteins, by using a model based on yeast prions.

"Even though life sciences has considerably advanced, we still cannot create proteins with catalytic functions--something that life forms can do very easily. In a sense, something very mysterious is happening. I really enjoy myself every day because I get to conduct research on chaperones, which support these mysterious functions of proteins."

Taguchi currently leads research efforts as the representative of a new research area called "Nascent Chain Biology," which was selected for KAKENHI (Grant-in-Aid for Scientific Research) on Innovative Areas[2] in fiscal year 2014.

Although information about proteins is contained in DNA, proteins cannot be directly synthesized from DNA. Information within DNA is first transcribed to messenger RNA (mRNA), then translated with the help of ribosome and transfer RNA (tRNA), and finally synthesized into nascent polypeptide chains (or nascent chains)--proteins made of many chained amino acids. Taguchi and his colleagues are responsible for advancing research on nascent chains. It is impossible to solve the mysteries of life forms without thinking outside the box. In order to uncover the mechanism of proteins, a new research approach was necessary.

"The Central Dogma of Biology[3] considers nascent chains as mere intermediates that exist on the interface, or boundary, between RNA and protein. However, recent research has revealed life phenomena such as ingenious self-control of folding and quality control performed by nascent chains, and it was discovered that some unique biological functions are performed only in the state of nascent chains. Considering this fact, in order to understand all aspects of cell regulatory functions centering on nascent chains, it is essential for the research of RNA and proteins to be integrated. In other words, it is time to break out of the old paradigm."

Strive to surpass your mentor 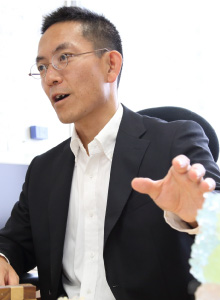 20 years have passed since Taguchi shifted his research area from applied chemistry to bioscience. He has been at the forefront of chaperone research since then.

Reflecting on his experience, Taguchi gave an inspiring message to young researchers:

"Above all, you should completely devote yourself to your field or research topic once you enter a laboratory. Read research papers and perform experiments as much as possible. You should dedicate yourself to doing these things at least once. Even if your efforts do not directly lead you to a career, the experience will benefit you in your future endeavors."

Further, Taguchi strongly emphasized that if students dedicate themselves to their research, they can become more knowledgeable about their area of study than their instructors.

"Strive to surpass your mentor. It doesn't have to be in all areas. Just focus on one, and you'll be able to do it. Keep this in mind when pursuing your research and do so with enthusiasm."

An American biochemist. He was awarded the Nobel Prize in Chemistry in 1972 "for his work on ribonuclease, especially concerning the connection between the amino acid sequence and the biologically active conformation."

A government grant offered for the purpose of creating new academic areas or supporting alliance between different areas and collaborative research. In fiscal year 2014, 8 projects were awarded the grant in the area of biology out of 81 applications.

A concept in molecular biology developed by Francis Crick in 1958. It states that genetic information flows in the following order: DNA →（transcription）→ mRNA →（translation）→ protein