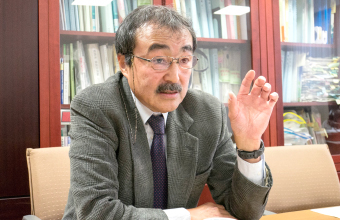 One year has passed since research system reforms were launched in April 2016, and concrete results have been achieved. Ando explains the background of the Institute's efforts.

"Along with the nation's falling birthrate, an aging population, and accelerating globalization, the situation surrounding universities has undergone significant change. For Japan to not only maintain but increase its presence in an environment of severe international competition, it is essential for us to promote research and development which ensures positive contributions to society. Tokyo Tech in particular must respond to the expectations society places on it to take a leading role in the advancement of science and technology in Japan."

He continues, "Finding solutions to the issues facing society — environmental problems, energy shortages, and food production — requires an interdisciplinary approach. These issues extend well beyond science and technology to include humanity, sociology, economics, and politics in a complex relationship that prevents them from being solved by individual researchers in individual specializations. It is therefore increasingly important for us to engage in interdisciplinary research with investigators from different nations, cultures, and areas of specialized knowledge and skill."

"However, while researchers at Tokyo Tech and other Japanese universities are excellent at deepening their individual fields of research as they follow their own lines of inquiry, they are not as good at problem solving through organizational research. They also lack sufficient experience in joint international research. These are some of the reasons that Japanese competitiveness lags behind other countries despite the high levels of research, development, and technology."

"In order to achieve the goal of becoming a world-leading research university by 2030, it is essential for us to enhance and strengthen our research capabilities. Our research reform is aimed at creating a system that facilitates an interdisciplinary approach to problem solving to effectively tackle the issues that society now faces. In addition to enabling researchers to access cutting-edge research from across academia, this reform enhances the environment for multidisciplinary research, fortifying the system's capability to comprehensively exercise the strengths of Tokyo Tech. IIR was established as a symbol of fundamental research system reform," Ando points out.

Breaking down walls to promote researcher mobility and interaction

While Tokyo Tech's academic structure formerly included both Schools and Graduate Schools1, its research organization was made up of four Research Laboratories2 and many other departments which conducted research activities relatively independently.

The new reform aims to accelerate research in integrated fields and increase the mobility of talent and information through the restructuring of organizations into broader categories, resulting in the new IIR and the three current Strategic Research Hubs. To eliminate the borders between research fields and organizations, IIR now subsumes four Research Laboratories, two Research Centers, and ten Research Units that all support each other, promote transfer and interaction, and increase transparency throughout the entire research organization. 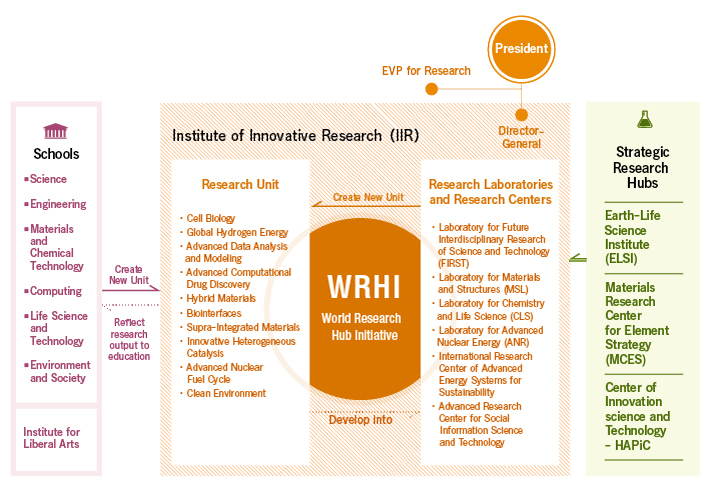 The establishment of Research Units allows Tokyo Tech to select prominent research leaders and topics in fields where growth is expected in the future, and to provide funding, space, and human resources to individual projects. The system places priority on promoting cutting-edge research, and allows researchers at other universities, institutions, and companies to participate in joint projects.

Together, IIR plays a central role in conducting collaborative research with industry and government-approved projects, and functions as the driving force behind Tokyo Tech's social contribution and innovation.

WRHI promotes international projects by inviting world-class investigators to join IIR with the aim of becoming an international base for research, including university-industry joint research. An open communication space at IIR allows overseas researchers and faculty members to exchange information beyond the boundaries of their individual organizations and areas of specialization. IIR's systematic and organizational interactions with international researchers allow overseas investigators to participate in joint projects beyond the boundary of organizations. IIR also makes it possible to more effectively utilize funds and facilities, which leads to improved conditions and convenience for project participants. 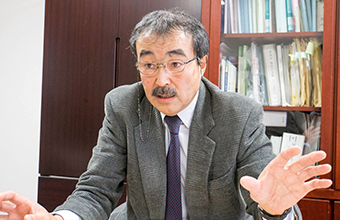 ELSI, one of Tokyo Tech's Strategic Research Hubs, was a model for the WRHI project. ELSI was established under the direction of the president in 2012 as a WPI3 research hub. Investigators, 40 percent of whom hail from abroad, explore the origin of the Earth and the life on it, a topic that covers multiple fields. Researchers specializing in a broad range of fields including earth science, planetary science, and life sciences gather in the same building to advance their research together. In addition, ELSI is ahead of other institutes not only in establishing an interdisciplinary and global research system, but also in acquiring large amounts of research funding from external sources4.

Ando explains, "Through the WRHI, we plan to share the ELSI system with talents at IIR as a model of best practice, and reflect it in Tokyo Tech's overall approaches, including our six Schools. IIR and WRHI in particular take the initiative in implementing procedures for international research and development, and in disclosing the results of projects. We believe this will bolster Japan's leadership in the area of technology, lead industrial innovation, and effectively address issues that we encounter. In the end, these measures will also improve the evaluation of Tokyo Tech."

Tokyo Tech has been advancing organizational reform to enhance applied research in interdisciplinary fields and move forward with the promotion of globalization. It also continues to improve its ability to better support basic and individual research that serve as seeds for further research.

"Honorary Professor Yoshinori Ohsumi has emphasized the importance of basic research, and universities need to facilitate this by ensuring that applied research does not become the only focus. Many investigators at Tokyo Tech have achieved remarkable results in basic research, projects that are not directly connected to industrialization or other practical applications. Tokyo Tech has a long history of studies in the liberal arts as well as the natural sciences and has achieved admirable results. As I explained, Tokyo Tech has a wide range of talented individuals working in extremely broad fields, and this makes us more capable of deepening the integration of humanities and sciences compared to other universities," Ando explains.

He concludes, "Utilizing Tokyo Tech's strength in promoting science and technology with a high sense of ethics, we maintain a good balance among the natural sciences, humanities, and social sciences, and a good balance between basic and applied research, which enables us to more effectively contribute to solving current social issues and to the improvement of Japan's international competitiveness. We also realize the importance of improving the research environment for individual researchers, whose activities are a driving force for the Institute. We seek to fully achieve a system that will enable us to more effectively utilize funds obtained through our achievements in joint research to improve the overall research environment at Tokyo Tech, which will lead to the realization of strategies for research and education in the future."

One of the highlights of Tokyo Tech's research enhancement efforts, WRHI is a six-year project that promotes joint research, increased researcher mobility, and advanced globalization by inviting outstanding research talent from overseas to Research Laboratories, Research Centers, and Research Units at IIR. With the help of these new members, Tokyo Tech sets the goal of creating new research fields, solving problems encountered by human beings, and cultivating industrial bases for the future with the aim of becoming a global research hub. 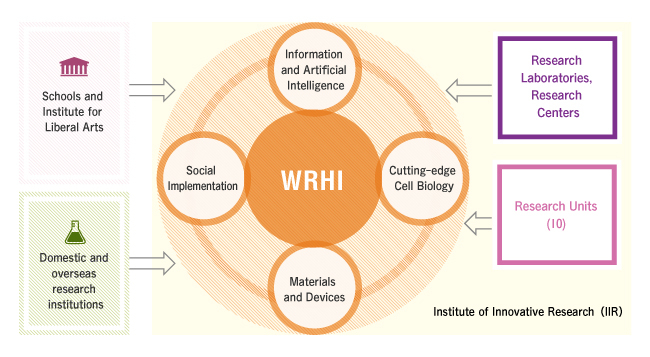 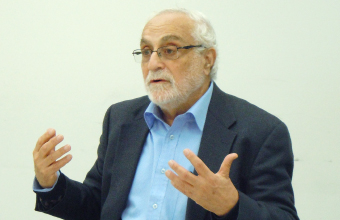 , Ramat-Gan, Israel. He joined Tokyo Tech's WRHI in November 2016 as a specially appointed professor to collaborate with Associate Professor Misako Takayasu, leader of the Advanced Data Analysis and Modeling Unit. Together, they are combining network science and big data to better understand the dynamics of financial systems.

Havlin describes network science as "a field in every field." Networks can be found in technology, transportation, biology, economics, and social systems. Network science began at the turn of the 21st century, as advances in computer technology made it possible to collect and analyze large amounts of data. In network science, researchers develop and apply mathematical methods to better understand real world phenomena and improve their function and resilience. However, early methods in classical network modeling, such as those in graph theory, were insufficient to capture the structure and dynamics of real world networks. This called for new mathematical methods and the emergence of network science.

In 2010, Havlin pioneered the field of interactions between networks. He explains, "Networks are not isolated. Take the airline network for example. It cannot exist on its own. It must also have communication, electricity, and transportation. And these networks also interact. Without electricity, you cannot have communication." Since 2010, he has been developing a theory for "networks of networks," looking at how failures can cascade to other dependent networks.

At the WRHI symposium on big data, Havlin spoke on the importance of looking at interactions between systems and how they can be used to predict phenomena such as epidemics, climate changes, and economic breakdowns. He lamented, however, on how we are not yet able to predict earthquakes, saying jokingly, "People told me it would snow today, but when I woke up this morning, no one told me there would be an earthquake!" Still, he is hopeful that network science will someday in the near future enable us to predict earthquakes as well.

When asked about how international collaboration has influenced his research, he states that working with Tokyo Tech has been critical, citing how Takayasu and members at the Advanced Data Analysis and Modeling Unit have collected a massive amount of data on Japan's economic sector. By combining their data with Havlin's theories on interdependent networks, the collaborators hope to answer critical questions such as why some companies succeed whereas others fail, how to predict industry changes, and how to improve industry robustness. Their advances would also not be limited to finance. Though their current work focuses on a single system, their methods would be generalizable, allowing other researchers to apply similar approaches to solve their own questions.

Havlin further explains that in many real world situations, network interactions are more important than the individual networks themselves. This is because it is often interactions that lead to systematic changes. The same can also be said for research collaboration, about which he states, "When two people collaborate, one plus one does not equal two. It becomes so much more due to their interactions." Havlin will be visiting Tokyo Tech several times a year, as work with Takayasu's team progresses. Through their collaboration, major advances are expected in network science, in big data, and in general understanding the complex real world.

4 Funds from an external source

ELSI acquired a total of USD 5.6 million (approximately JPY 670 million) in research funds from the John Templeton Foundation in the US. (Tokyo Tech News)