A potential new treatment for diabetes is emerging in the form of regenerative medicine. The focus is on producing pancreatic β cells, the cells that secrete insulin, in a test tube for later transplant. Professor Shoen Kume at the School of Life Science and Technology is working on the generation of β cells from embryonic stem (ES) cells and induced pluripotent stem (iPS) cells.

The process of pancreas development 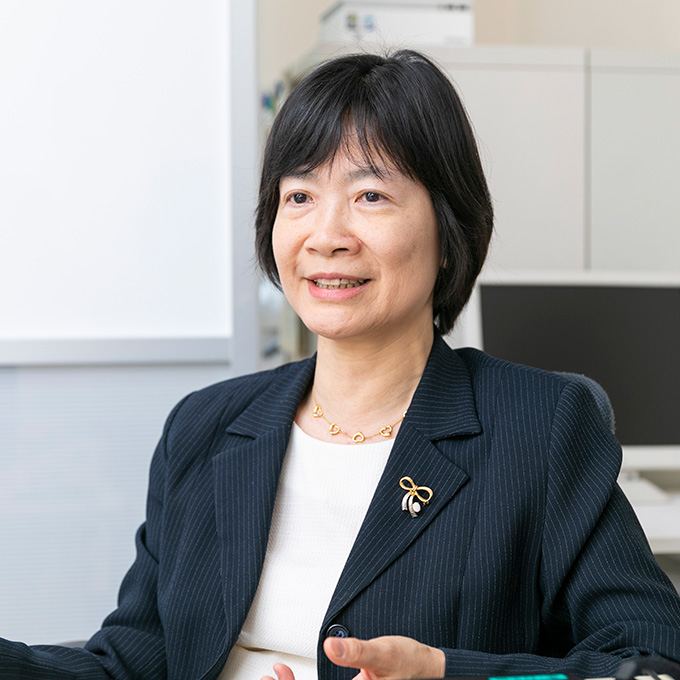 Diabetes occurs when a lack of insulin reduces the level of glucose in the blood. Insulin is a hormone secreted by the endocrine β cells in pancreatic islets. Therefore, diabetes is thought to be caused by the dysfunction of β cells.

Currently, treatment for diabetes involves insulin injection or, in severe cases, transplant of pancreas or pancreatic islets. However, lack of donors poses a serious problem. The transplantation of β cells produced in a lab may offer an alternative. Kume hopes to make this a reality.

Looking back at the start of her research, Kume states, "When I was a doctoral student, I was involved in developmental biology, which focuses on the development of multicellular organisms and the process of differentiation of the fertilized ovum into organs. I was initially interested in the establishment of body axis immediately after fertilization, but my experience as a research associate at Harvard University (1999-2002) shifted my focus to pancreas development."

Kume became interested in the pancreas while studying under a professor at Harvard who was hoping to help his two children, both of whom have type 1 diabetes. Taking an interest in pancreas development, Kume found that still little was known about the process. This piqued her curiosity. After returning to Japan in 2002, she began research on pancreas development in earnest at the Institute of Molecular Embryology and Genetics at Kumamoto University. Her research there would continue until 2014.

One possible approach is to identify adult stem cells1 in pancreas and examine their ability for regeneration. Although some tissues regenerate daily, other tissues do not. The pancreas is a tissue that is supposed not to actively regenerate. For this reason, Kume surmised that adult stem cells would not yet be a good choice and decided to instead explore the potential of using ES and iPS cells. 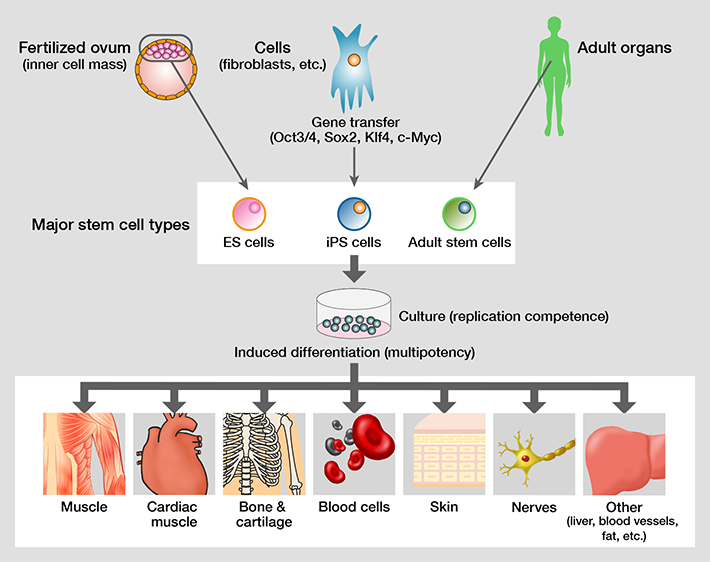 Specifically, Kume attempted to establish an ES cell line bearing a green fluorescent protein (GFP) as a reporter to monitor the expression of PDX1 gene. This made it possible to quickly and easily identify differentiation into pancreatic precursor cells.

Kume recalls, "After repeated trial and error, we succeeded in establishing a procedure for efficient production of pancreatic precursor cells from mouse ES/iPS cells. I still remember the excitement we felt the moment we saw the cells fluorescing in green [video]." This achievement was widely reported in the media. 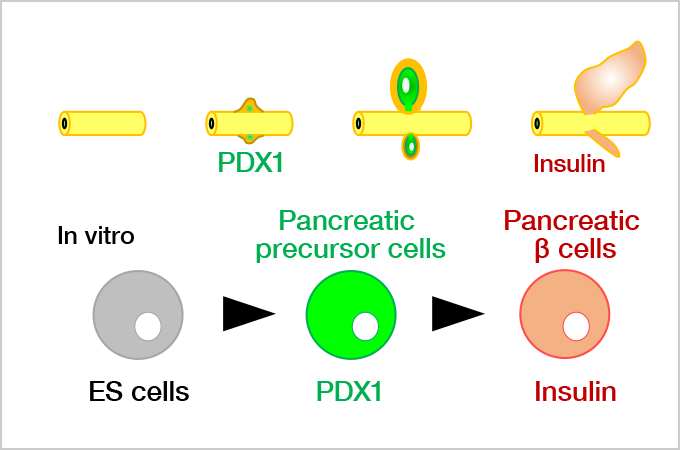 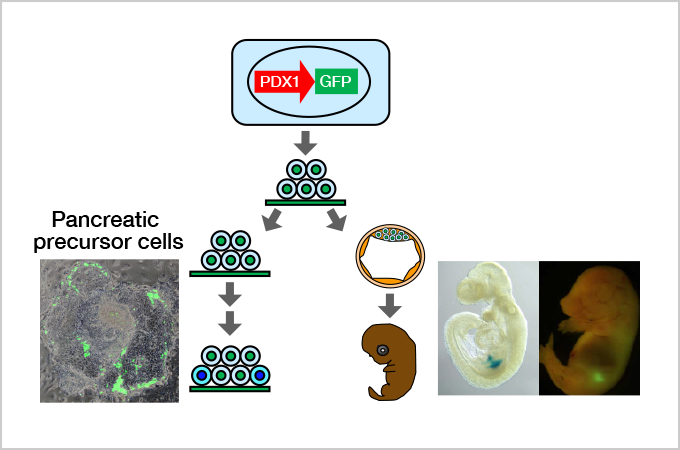 Figure 3. Visualization of the differentiation of cells in a test tube

Kume then set out to identify the conditions that promote differentiation of pancreatic precursor cells into β cells.

She explains, "We knew that adding certain growth factors or low-molecular-weight compounds promotes cell differentiation. However, the compounds we already knew might not be enough to regulate the differentiation into β cells. Therefore, in collaboration with a professor at Kyoto University, we began using a library of low-molecular-weight compounds whose mechanisms of action have already been determined and listed as pharmaceutical agents in markets."

Pharmaceutical agents usually target specific molecules such as enzymes and receptors. Careful examinations of an agent's mechanism of action give implications on its therapeutic effects. The chemical library allowed Kume and colleagues to narrow down the molecules that are involved in differentiation into β cells. 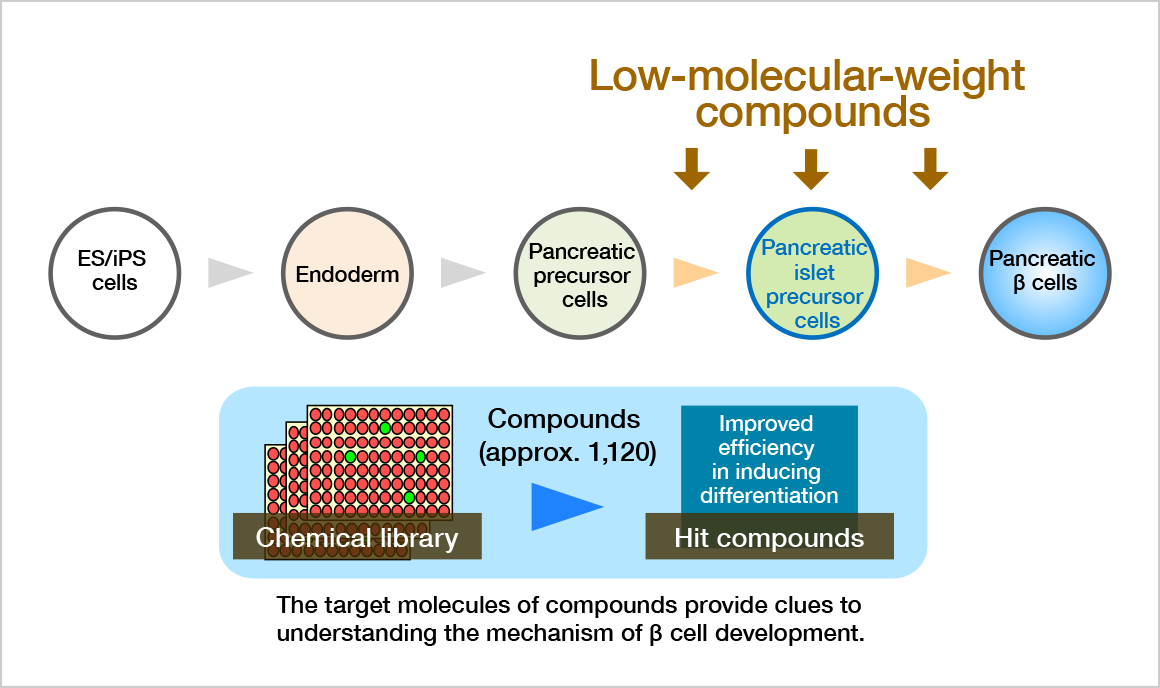 The results were fascinating. She found that a vesicular monoamine transporter 2 (VMAT2) inhibitor called tetrabenazine (TBZ) reduces dopamine in cells and promotes differentiation into β cells.

In fact, she used TBZ and another compound to differentiate mouse ES cells into islet cells and transplanted them into diabetic mice. She then found that the blood glucose level in the mice improved.

The intricate role of amino acids in cell differentiation 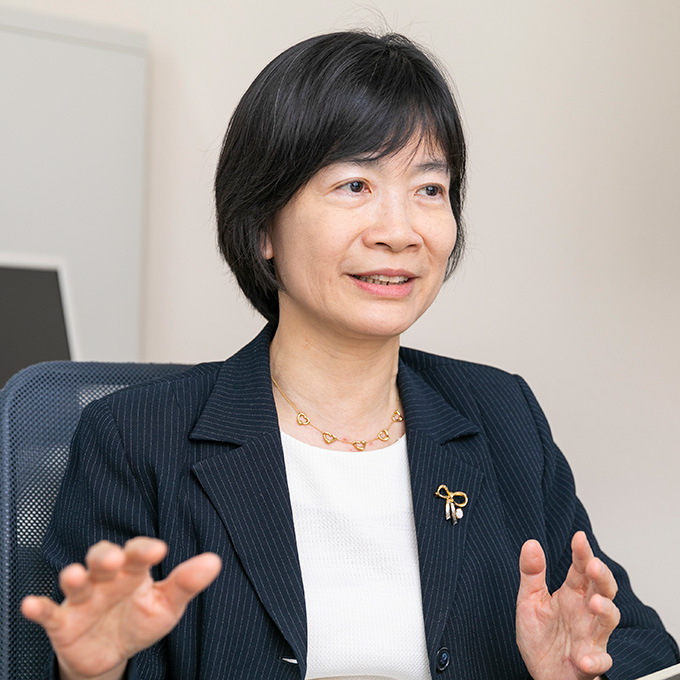 She explains, "By removing one of 20 amino acids at a time from culture media, we found that the absence of methionine from the mix resulted in the selective elimination of undifferentiated cells. Prior research using mouse ES cells showed that without the amino acid threonine, undifferentiated cells died. Here, we used human ES cells and found that methionine is essential."

"Experimenting with different culture media showed us the way to efficiently eliminate any remaining undifferentiated cells."

From expression mechanisms to regenerative medicine and drug discovery

In January 2019, Kume launched an open innovation research program on iPS cell-derived insulin producing cells in collaboration with Daiichi Sankyo and Mitsubishi UFJ Capital. Combining her technique for efficient production of pancreatic β cells derived from human iPS cells with Daiichi Sankyo's technology, they aim to improve the manufacturing process and make the performance of iPS cell-derived insulin producing cells similar to the human body's own pancreatic β cells. The joint research is a three-year program, with the goal of creating a practical therapy for severe type 1 diabetes.

This attempt at creating transplantable cells from ES/iPS cells has attracted attention for its potential to reveal mechanisms of organ differentiation as well as its applications to regenerative medicine and the development of new therapeutic methods and pharmaceutical agents.

In addition, as it has been shown that genetic factors are involved in the development of type 2 diabetes, derivation of iPS cells from a diabetes patients or editing of specific genes in ES/iPS cells will allow investigation into the relationship of certain genes with the dysfunction of β cells.

Kume is also currently working on the generation of other digestive organs in vitro, such as liver and intestine, from ES/iPS cells.

At the end of the interview, Kume had the following advice for early-career researchers and students considering careers in research: "You never know what will happen in the future. My experience in discovering something unexpectedly simply by pursuing my research has made me think that young people should be more honest with their interests instead of worrying about the future. Another thing I believe is important is expanding your horizons. While my lab has students from Malaysia, Egypt, and many other countries, I feel that Japanese students are not so interested in studying abroad. Maybe it's because they already have a great research environment in Japan. However, I recommend that young people be more adventurous and go abroad, because that can expand their horizons and relationships. Finally, many students hesitate to continue into doctoral programs, but I want them to consider it as an investment in themselves." 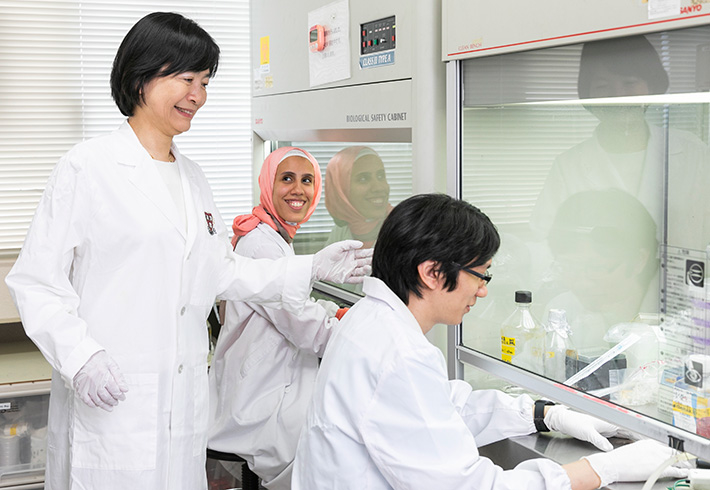 Culture media are special liquid or solid substances used to grow microorganisms and cells. They contain nutrients necessary for culturing. 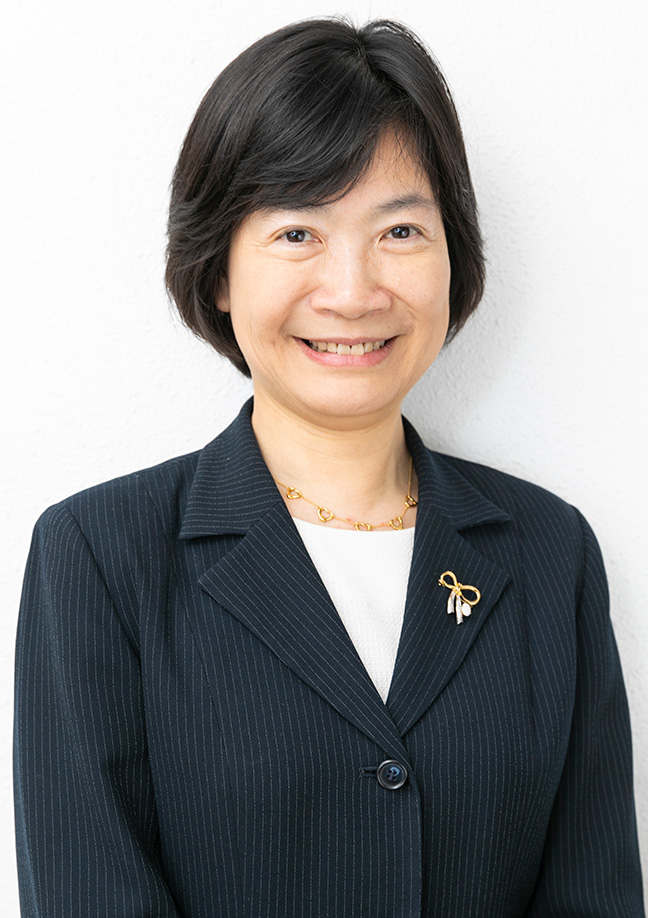