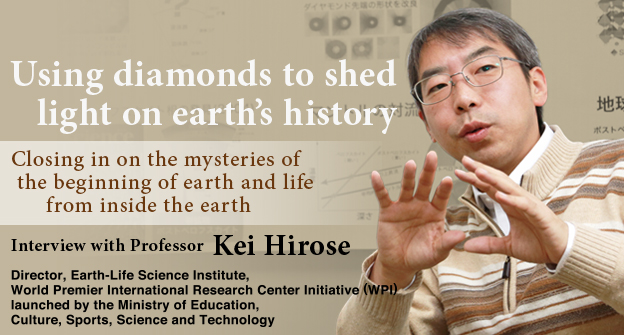 "In my work over the years I have always tried to demonstrate my own particular strengths, and this approach led me to new discoveries that I had never imagined. For a scientist, this is a great thrill."

These are the words of Professor Hirose spoken in a nonchalant manner. While he makes his achievements sound effortless, putting this philosophy into practice has been no easy task. The strength of Hirose perhaps lies in his ability to realize what he sets out to do.

Hirose's area of specialization is earth science. In his work, he attempts to better understand how the earth began, what state it is in at present, and what it will be like in the future by investigating the interior of the earth.

Leading the world in a number of groundbreaking discoveries in earth science over the years, Hirose has shed new light on earth science history. In recognition of his outstanding achievements, he has received numerous awards including the prestigious IBM Japan Science Prize and, in 2011 at the young age of 43, the Japan Academy Prize.

One particularly outstanding achievement that has attracted the attention of researchers all over the world as the most "significant discovery in the history of earth science in 30 years" is his work on post-perovskite, which was published in the science journal Science in May 2004. The nature of the earth's lowermost mantle, at a depth of 2,600 to 2,900 km from the surface, has long been mysterious, because many features of seismological observations of this region remain unexplained. Through his work, Hirose succeeded in identifying the material of the lowermost mantle for the first time, which is now called post-perovskite.

The radius of the earth is approximately 6,400 km. The interior of the earth is huge and consists of three layers. In order from the center, they are the core comprised of metals, the mantle comprised of rock, and the crust or the layer on which we live. A depth of 2,600 to 2,900 km corresponds to the bottom part of the rocky mantle overlying the metallic core.

Hirose explains, "We know that the interior of the earth is actually divided into many layers, just like an onion. When you peel away these layers one at a time from the outside in the same way you would peel an onion's skin, you finally come to the core. The mantle above the core is also divided into four layers, and by 1974 we had identified what the first three layers were made of. When it comes to the lowest layer, the fourth layer, however, there were all kinds of hypotheses but they all remained in the realm of conjecture. This is why I wanted to elucidate the true nature of this material that formed the fourth layer." 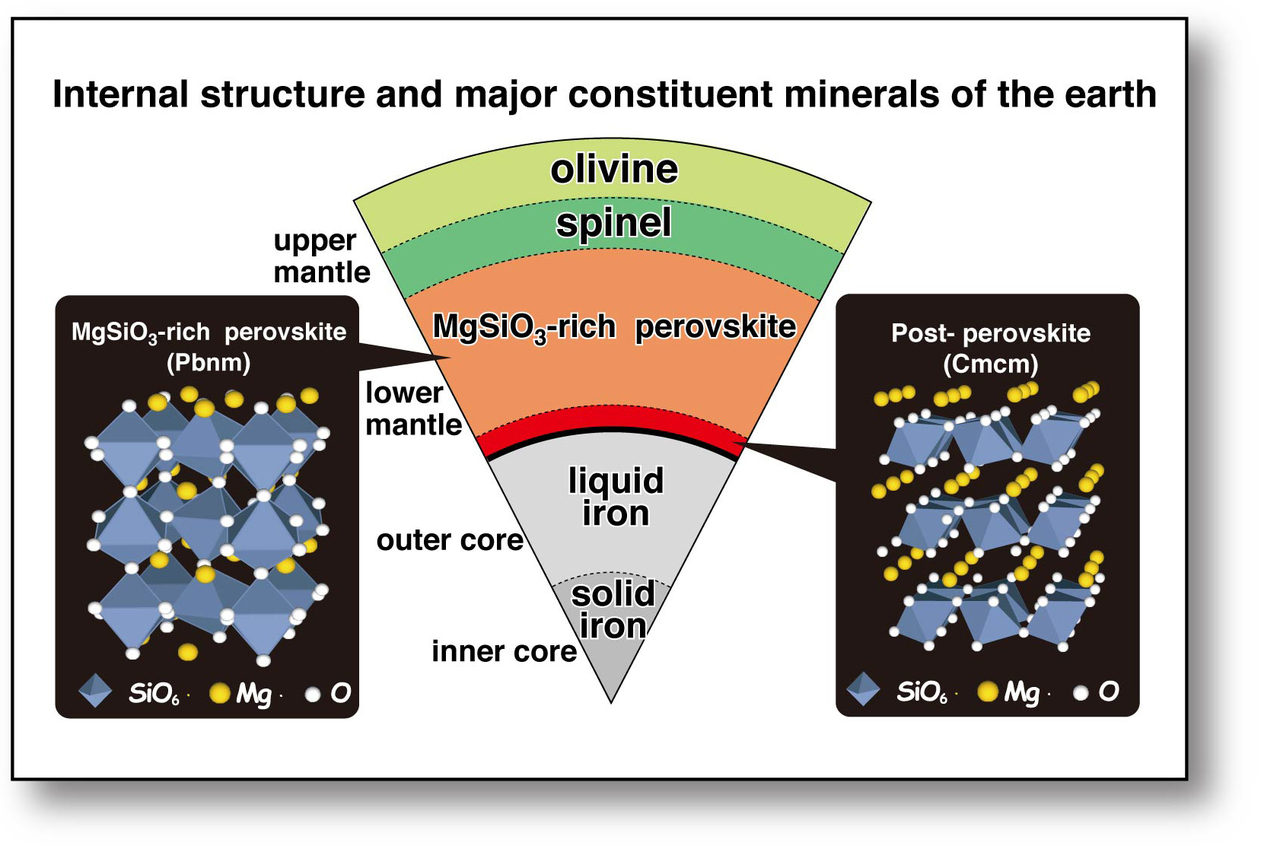 Interior of the earth, which is divided into many layers of various constituent materials and crystal structures.

Aiming straight for the bottom of the mantle 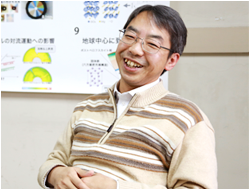 "For the first two years of undergraduate study, my grades were poor, so it was impossible for me to get into the popular departments," says Hirose. What supposedly led him to choose the path of geology was the limited choice available to him as an undergraduate student at the University of Tokyo. In choosing a department, he had only two options: to pursue either mathematics or geology. In the end, he chose the geology department because he had no aspiration to follow in the footsteps of his father, who was a mathematician. The prospect of being able to travel to various places under the guise of geological research also aroused his interest in geology.

In reality, however, the research lab he entered performed experimental studies, and he was involved in little fieldwork. During his student days at the University of Tokyo, Hirose studied magma formed near the surface layer of the earth. Using the magma producer available in the laboratory, at his own initiative he took up a concept that his academic supervisor had been mulling over for more than 30 years but had never tried. Surprisingly, Hirose succeeded in achieving the dream of his mentor.

Reflecting on this time in his life, Hirose says, "I believe this experience of success marked the beginning of my own determination as a scientist to take up for the first time in the world experiments that nobody had ever attempted."

In 1995, however, when Hirose left the University of Tokyo to become an Assistant Professor in the Department of Earth and Planetary Sciences (School of Science) at Tokyo Institute of Technology, he decided to conclude his study of magma and focus on a new topic of research. It was then he decided to research deeper areas of the earth. His rationale at that time was that since he was going to probe deeper areas of the earth, he might as well aim for a much deeper place than anyone had ever attempted before.

Elaborating on his rationale at the time, Hirose explains, "All kinds of phenomena are occurring in the boundary region between the earth's crust where we live and the atmosphere. When I considered the earth as a whole and the place where the most important processes are occurring, it became clear that it is the boundary region between the earth's core and the mantle. That was also one of the reasons why I decided to aim for the bottom of the mantle in my research."

The question then was how to aim for a depth of greater than 2,600 km. Most likely, the first idea that springs to anyone's mind is digging! However, even the CHIKYU, the deep-sea drilling vessel that boasts the world's highest drilling capability, is able to reach a depth of only about 7 km.

One way they do this is through the use of a device called a "diamond-anvil cell" where a sample is placed between two diamonds and compressed. A laser beam is then applied to heat the sample. After that, the sample is analyzed at the SPring-8 synchrotron radiation facility using a high-power x-ray to determine into what kind of crystal structure the sample has been transformed. 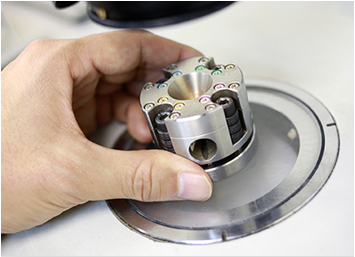 The diamond-anvil cell is a device that applies pressure to a sample by placing the sample between two diamonds and compressing it from both the top and bottom. The diamonds in this device are 16-sided pyramids, with slightly flattened tips.

To aim for conditions like those found at the bottom of the mantle, it was necessary to reach 1.20 million atmospheric pressures and a temperature of 2,500 K. To learn experimental methods using the diamond-anvil cell, Hirose decided to first master basic techniques by taking up a position as a visiting investigator at the Geophysical Laboratory of the Carnegie Institution in Washington D.C.. He held this position for a year and a half from 1996. Upon returning to Japan, he began full-scale, high-temperature, high-pressure experiments.

Elucidating the bottom of the mantle, and on to the deepest part of the earth

Realizing a temperature and pressure equivalent to those found at a depth of 2,600 km is no small feat. But Hirose never faltered in his single-minded devotion to this goal. After a long period of trial and error, he finally succeeded in realizing 1.25 million atmospheric pressures and a temperature of 2,500 K.

With his heart pounding, Hirose viewed the analytical results of the material that had formed and was astounded. Before his eyes appeared a material with a crystal structure that nobody had ever imagined. He realized that this material, named post-perovskite by Hirose, could offer an extremely detailed explanation of that part of the earth that had remained a mystery until then. 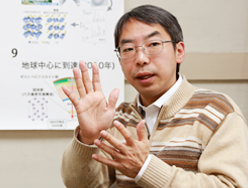 "Are you familiar with a type of rock called 'mica' that peels into thin layers like paper? We discovered that post-perovskite has a crystal structure just like mica and conducts electricity and heat very well," explains Hirose.

After this, Hirose continued to set and break his own records in high-temperature and high-pressure experiments. In April 2010, he finally succeeded in achieving a pressure and temperature condition beyond 3.64 million atmospheric pressures and 5,000 K. In other words, he recreated the conditions at the center of the earth for the first time in the history of the world. As a result of this achievement, he ascertained that the material at the inner core of the earth has a hexagonal, close-packed structure where the iron atoms bond at high density.

"There were four factors that enabled our laboratory to always be first at setting new records: the strong passion of our team members to reach our goals at all costs; the grinding and polishing engineers with brilliant techniques in small factories who continuously honed their skills in grinding and polishing diamonds; the synchrotron radiation facility SPring-8, which boasts the world's highest efficiency; and, above all, the dedication of the students at Tokyo Institute of Technology, who relentlessly persevered in silence without becoming discouraged when faced with repeated failures," beams Hirose. There must have been countless failures behind the shadow of success but Hirose smiles calmly without showing even a trace of such hardship. 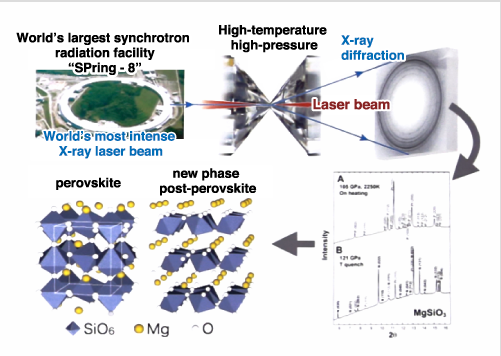 Without knowledge of earth science, it is impossible to explain the history of evolution of life

The discovery of post-perovskite has led to many other revelations. One that caught the attention of Hirose is the possibility of a correlation between the evolution of earth and life.

The earth's core consists of two types of matter: an outer core of molten metal and an inner core of solid metal. It had previously been assumed that the emergence of the inner core occurred about 3.5 billion years ago. Hirose's research, however, revealed that the formation of the inner core was facilitated by post-perovskite. And it is now believed that the formation of the earth's core may have occurred as recently as 500 million to one billion years ago.

"About 500 million years ago is the time when the so-called biological explosion known as the Cambrian Explosion occurred. Also, life emerged on land soon after that. The formation of the earth's inner core and such evolution of life may be linked with each other. The history of the evolution of life should have reflected the change in environments at the earth's surface, which is strongly controlled by the interior of the earth when viewed over a long period of time. To shed light on the most fundamental mystery of mankind regarding when and where life originated and how it evolved, we must unlock the secrets of earth's history," declares Hirose.

In 2012, a project merging earth science with life science was launched by the Earth-Life Science Institute (ELSI). ELSI is a joint research center of Tokyo Institute of Technology, Ehime University, Institute for Advanced Study, and Harvard University. It was selected in 2012 for the World Premier International Research Center Initiative (WPI) program promoted by the Ministry of Education, Culture, Sports, Science and Technology. As the director of this initiative, Hirose says with great enthusiasm, "We want to accelerate the elucidation of the mysteries of the origins of earth and life."

Hirose has the following message for would-be scientists of the next generation, "The most important things for a scientist are enthusiasm, effort and a little bit of luck. Moreover, in everything you do, it is important to first meet the challenge without making up your mind at the outset that it is impossible. This simple way of looking at things will change your life significantly. If some of you hold the view that you may not be able to pursue the scientific path just because your grades aren't good, get rid of such a silly notion immediately and instead pursue every challenge that comes your way. When you do that, the path to the future will naturally open up before you." 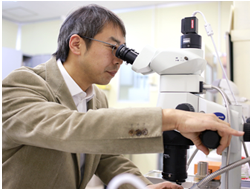 launched by the Ministry of Education, Culture, Sports, Science and Technology