Impact of microplastics on ecosystems

- Pursuing co-prosperity through the "unity of human and nature" 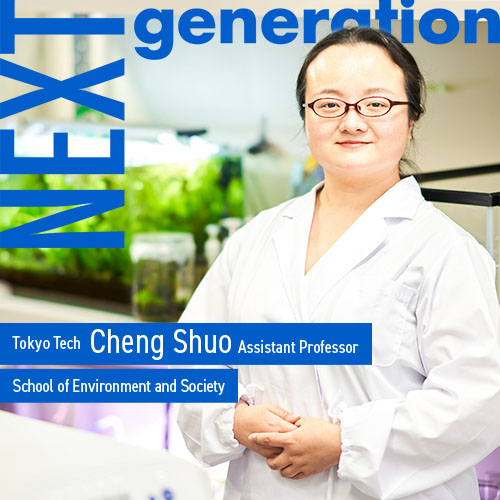 Microplastics adversely impact the environment and ecosystems, raising concerns on how they affect aquatic life. Assistant Professor Cheng Shuo (Department of Transdisciplinary Science and Engineering, School of Environment and Society) has created a simulated ecosystem called a "microcosmic system" to investigate how aquatic organisms are impacted by microplastics.

- Tell us about your research.

I am researching the impact of environmental contaminants such as microplastics on the natural environment, ecosystems, and humans.

Microplastics are microscopic plastic particles with a diameter of 5 millimeters or less. Microplastics are generated when discarded plastic products gradually become finer due to phenomena such as weathering. The term was first proposed in the 1980s and then defined by the National Oceanic and Atmospheric Administration (NOAA) in 2008. In actuality, many microplastics in the natural environment have sizes ranging from micrometers (10-6 m) to nanometers (10-9 m). These microplastics cannot be seen with the naked eye. 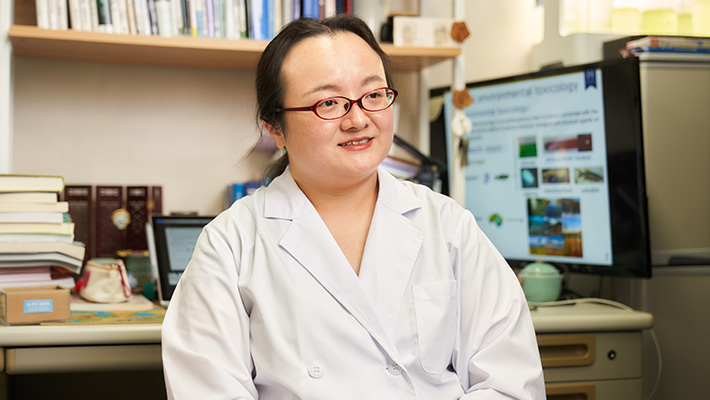 While researching plastics, I learned that plastics that are large enough to be seen with the naked eye are relatively easy to collect. Conversely, plastics that have already become finer are difficult to collect, and are widely dispersed in the environment via water and wind.

Therefore, I decided to investigate how microplastics impact the ecosystem.

Microplastics, dispersed by wind and water, have an adverse effect on aquatic life.

1.
Due to their long decomposition time, MPs have an irreversible impact on the environment.
2.
MPs can adsorb and carry high concentrations of contaminants.
3.
The destructive power of MPs along the food chain increases when they are consumed by organisms.

- Tell us in detail about your research theme.

Since microplastics exist widely throughout the natural environment, my research targets the entire ecosystem or food chain. However, real ecosystems have an extreme level of complexity which makes it difficult to collect and analyze data. Also, if I were to conduct experiments using environmental contaminants or hazardous substances in an actual ecosystem, my experiments and research itself would cause environmental destruction.

I am currently installing multiple microcosms in our laboratory and collecting data for analyzing the impact of microplastics on ecosystems. Moving forward, I plan to analyze the collected data in detail. 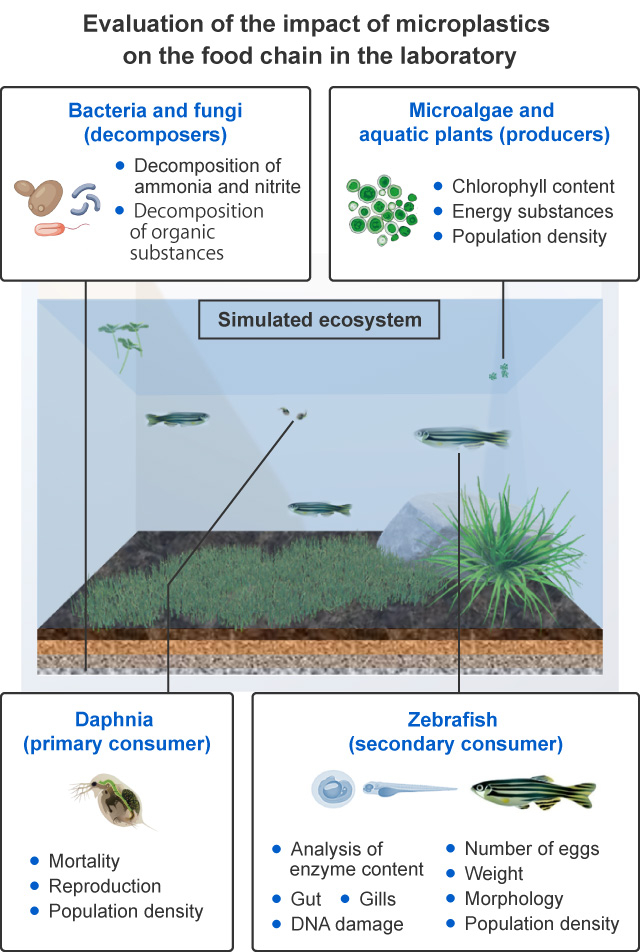 A microcosmic system (controlled experimental ecosystem) imitates an ecosystem that can be controlled. In Shuo's laboratory, multiple microcosmic systems are installed. The microcosmic systems contain microalgae such as chlorella, which is the starting point of the food chain, plankton such as daphnia, which are the primary consumers of microalgae, and zebrafish, which are the consumers of plankton (secondary consumers). The systems also contain bacteria and fungi that break down organic matter and hazardous substances (ammonia, nitrite, etc.) contained in food residues, carcasses, etc., into small-molecule organic matter and non-toxic nitrogen gas that can be reused by producers.

- What methods do you use to collect data?

For example, chlorella widely inhabits lakes and rivers. Chlorella is a microalgae with a diameter of 3 to 8 micrometers. It is the starting point of the food chain and serves as a food for plankton and small fish. Therefore, firstly, in order to investigate how chlorella is impacted by microplastics, I culture chlorella by itself. I then observe changes in the chlorella's rate of growth and its contents of proteins, sugars, vitamins, etc.

In fact, I found that when the amount of hazardous substances attached to microplastics increases, the ability of chlorella to produce nutrients decreases, resulting in a decrease in the production of protein and sugar. In addition to chlorella, I also confirmed an impact on plankton such as daphnia, which are the primary consumers of chlorella. 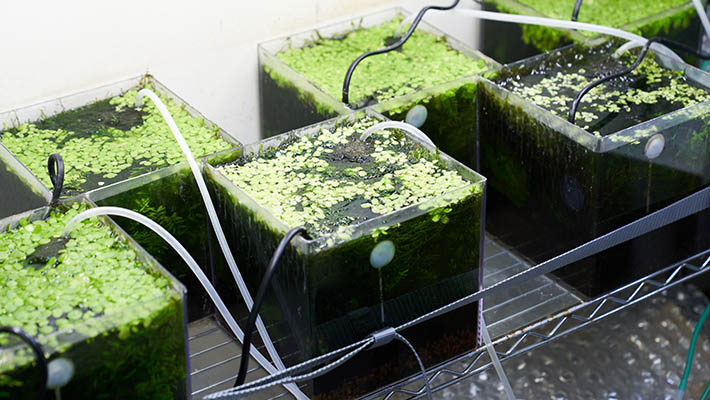 If the amount and quality of nutrients contained in microalgae such as chlorella decreases, it is natural for plankton to stop eating chlorella. Furthermore, fish such as zebrafish that eat plankton (secondary consumers of chlorella) will also be adversely impacted. In this way, a negative impact on the entire food chain was confirmed through experiments and collected data. 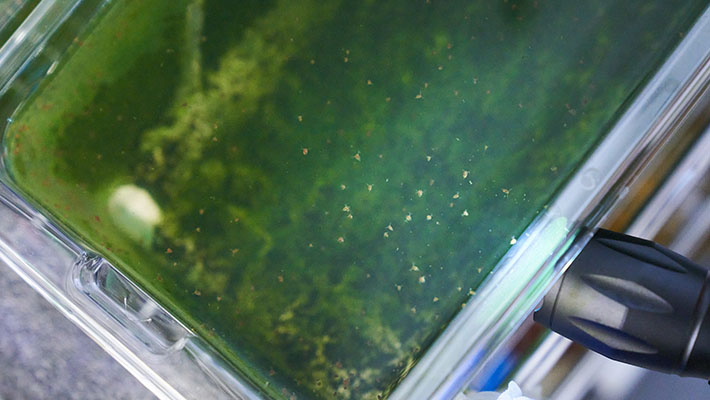 Daphnia (white dots), the primary consumers of chlorella, ate less chlorella when the quality and nutrients of the chlorella declined.

Additionally, all organisms come into direct contact with microplastics, so there are concerns regarding both direct impact and indirect impact on the food chain. To examine this further, researchers placed microplastics with hazardous substances such as heavy metals and dioxins attached to their surfaces in a tank and observed zebrafish for about one month. As a result, they also learned about the impact of hazardous substances on fish and fish eggs. For example, adult zebrafish enter a state of antioxidant stress due to microplastics and hazardous substances adhered to the microplastics. Researchers observed phenomena such as a decrease in the hatching rate of juvenile fish and an increase in the malformation rate of successfully hatched juvenile fish.

- What were your main findings? 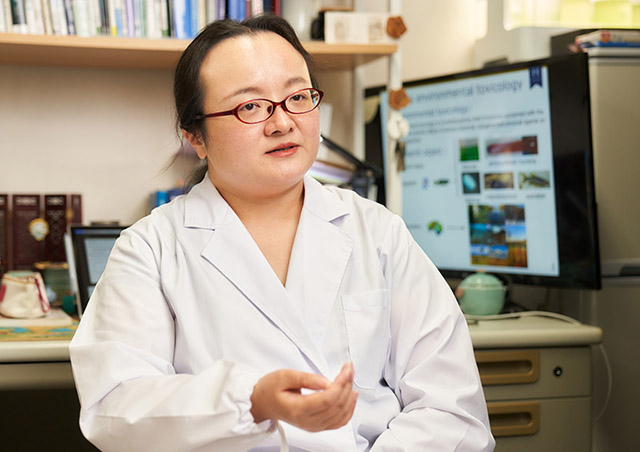 - What difficulties have you encountered in your research?

Originally, I had been studying automatic control of machines and other equipment at North China Electric Power University (Beijing). Afterwards, I came to Japan in 2011 to conduct research on solid waste treatment and energy conversion at the Interdisciplinary Graduate School of Science and Engineering (name at that time), Tokyo Institute of Technology.

However, since my field of expertise is not life science, I had to study life science concepts and methods from scratch before starting this research.

Furthermore, when constructing a microcosmic system, it is necessary to raise a variety of aquatic organisms yourself, from microalgae to bacteria, plankton, and small fish such as zebrafish. I had never even grown a plant by myself before, so this was a big challenge. Nevertheless, the challenge has made me more interested in aquatic life. Moreover, breeding aquatic life has helped me understand the laws of nature. Initially, I never imagined that I would need such a wide range of knowledge about aquatic life!

In order to build a microcosmic system, our laboratory raises various organisms such as algae, bacteria, paramecium, daphnia, aquatic plants, shrimp, and fish.

- Tell us about your future goals.

I want to complete my research by expanding the investigation and analysis of the impact of microplastics from the molecular level to the entire natural environment. We need to assess the impact of the elusive and pervasive threat of microplastics and take action as soon as possible.
I am confident that this research topic will be of great meaning for our future. 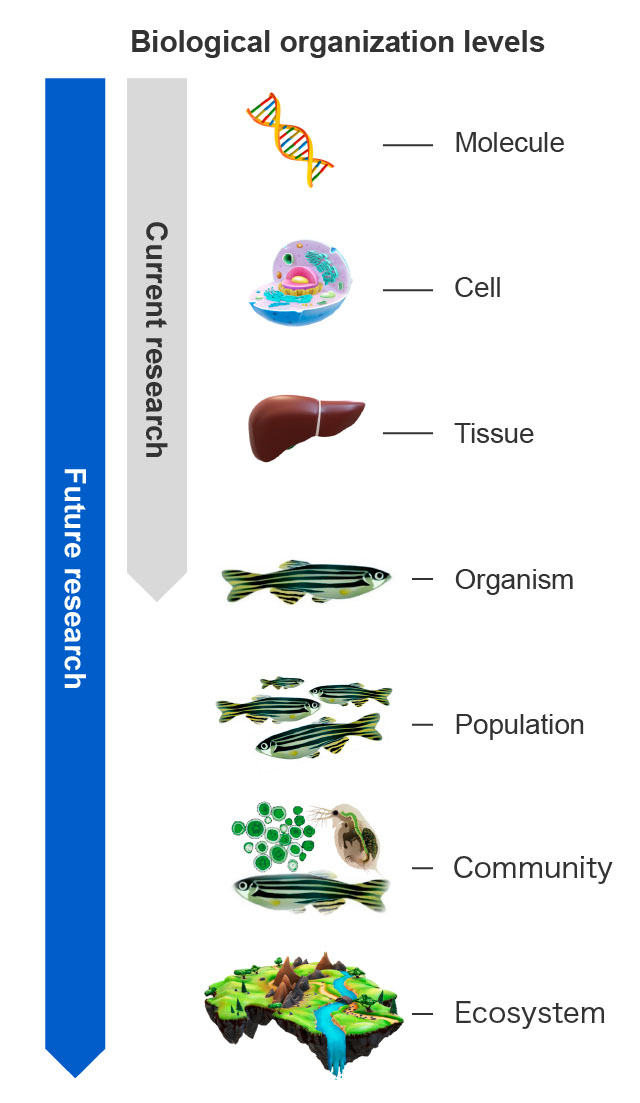 Shuo has clarified that hazardous substances adhering to microplastics destroy DNA and have an impact on organisms at the molecular level. She is currently studying the adverse impact of microplastics at each level, from molecules to cells, tissues, and individuals. Moving forward, she plans to expand the scope of her research to include the entire natural environment.

Pursuing co-prosperity through the philosophy "unity of human and nature"

- What prompted you to start researching microplastics? What are your thoughts on environmental issues?

My hobby is scuba diving, so I was shocked to see television reports on sea creatures such as turtles with discarded plastic wrapped around their bodies. That's why I started researching microplastics.

In China, there is a philosophy of "unity of human and nature" that crosses the three religions of Confucianism, Buddhism, and Taoism. This is the idea that humans and nature are inherently united. In this philosophy, "nature" refers to natural environment.

Since the Industrial Revolution, the rapid development of economies and society has disrupted the balance with nature, and humankind has caused environmental destruction. Therefore, we are now starting to make serious efforts to stop global warming.

However, since humans have become accustomed to a lifestyle of convenience, it would be difficult to return to a pre-industrial lifestyle. Economic and scientific progress cannot be stopped. A deeper understanding of nature is essential for humans to achieve co-existence and co-prosperity with nature. However, we still lack a sufficient understanding of nature. Personally, I believe that we must strive to better understand the natural environment and life other than humans. 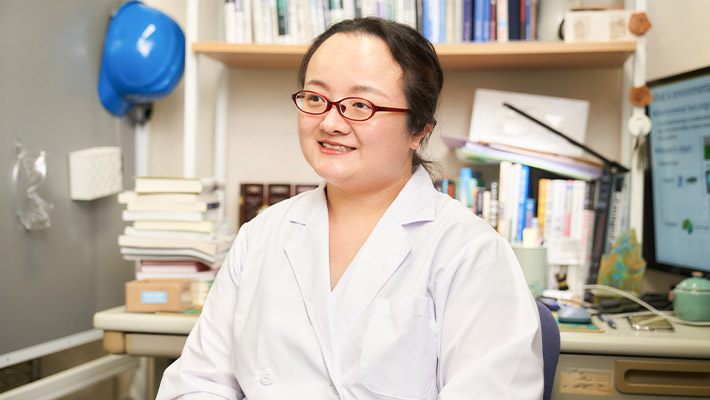 - As a student, why did you choose to study abroad at Tokyo Tech?

I have an unusually strong sense of curiosity, and I decided to study abroad because I wanted to see the world outside of China. I chose Japan as my study abroad destination because I had visited Japan through my father's work when I was in the fifth grade of elementary school. My father was a doctor and had exchanges with Japanese hospitals. I fell in love with Japan during my visit, and I always thought that Japan would be a good place to study abroad.

Fortunately, I had the opportunity to fulfill my dream, so I enrolled at Tokyo Tech in 2011 and received my Ph.D. in 2016. After that, I spent about two years doing my postdoctoral fellowship at Tsinghua University in China. I then returned to Tokyo Tech as a faculty member in 2019.

Before enrolling at Tokyo Tech, I was having trouble deciding on my future career path. However, upon entering Tokyo Tech, I found my lifelong research theme and made up my mind to live as a researcher. I am very grateful to Tokyo Tech.

- What message do you have for students who want to become researchers?

I have two pieces of advice. First, to become a researcher, imagination, observation, and action are more important than test scores alone. The second is to have a firm understanding of what you really want to do, be honest with yourself about your feelings, and persevere until you have accomplished your goals. Life is a long stretch of decades. Talented individuals are especially prone to encountering various temptations during their journey and straying from their chosen path. However, I believe that persevering and seeing things through to the end is the most important quality as a researcher. 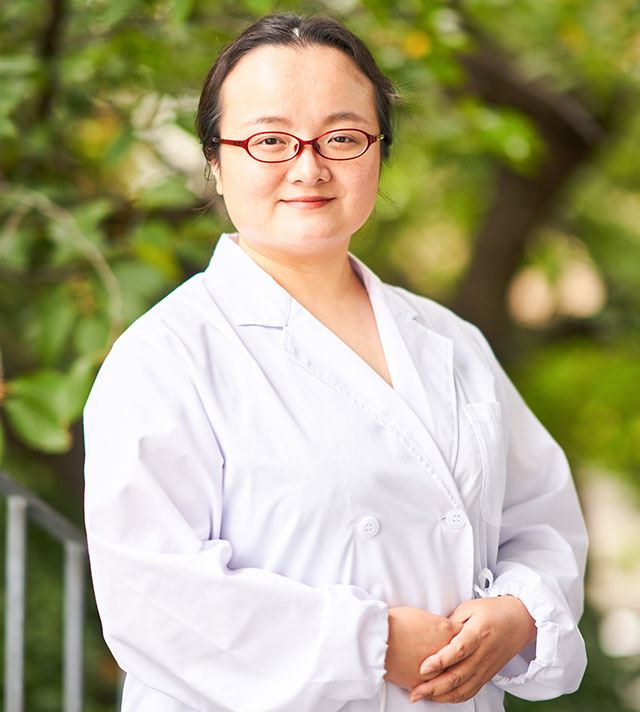 Assistant Professor, Department of Transdisciplinary Science and Engineering, School of Environment and Society