Department of Biomolecular Engineering, Graduate School of Bioscience and Biotechnology

Cancer has been the primary cause of death in Japan since 1981, claiming 370,000 lives in 2014 alone1. It has become a national disease, attacking one in two people, one in three of whom dies as a result.

More optimistically, though, cancer is no longer an automatic death sentence. Medical advances mean early diagnosis and treatment can even allow patients a full recovery, whereupon a new challenge emerges: how to pinpoint the location and state of cancerous cells to treat them effectively. Some scientists are tackling this challenge using the latest biotechnology for new examination and cure methodologies. Professor Shinae Kondoh, who joined the Graduate School of Bioscience and Biotechnology in 2010, has been one such pioneering researcher. 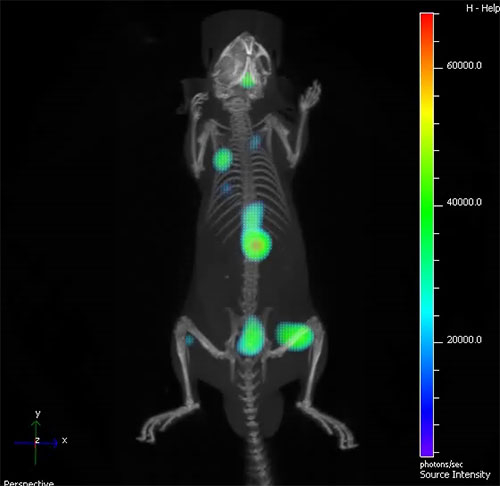 Cancer refers to the formation of malignant cells due to genetic damage. Once formed, cancerous cells proliferate like wildfire, and unlike normal cells, are uncontrollable by biological functions. It is virtually impossible to prevent and eradicate such cells, mainly due to multiple unidentifiable factors involved in the genetic damage mechanism. This is further exacerbated by the way the cancer functions. It exploits normal tissue and cells such as blood, lymphatic vessels, and macrophages (white blood cells) to form a cancer microenvironment while rapidly multiplying. Such environments can create excellent markers to specify the affected locations, but remain highly elusive when conventional analysis methods are used.

"Using optical in vivo imaging techniques on a small animal such as a mouse enables visualization of not only the location, size, and spread of cancerous cells, but also the 'status' of their activity at the cellular level, which is crucial for monitoring the effect of new medicine tested on cancer cells. Several issues such as limited observation depth remain before clinical application, but diagnosis equipment that utilize optical systems are actively being developed worldwide and will greatly facilitate early cancer detection and treatment in the near future."

The determinative characteristic of cancer cells, something normal cells lack, is their ability to survive even in a hypoxic microenvironment, where the level of oxygen normally required by living organisms to produce energy is limited. Hypoxic regions located far from blood vessels are also deprived of nutrition. Cancer cells in the hypoxic regions make every effort to survive in such a severe microenvironment, such as by suspending division to save energy and moving to a better microenvironment. They also rapidly resume proliferation once oxygen and nutrition levels improve. Kondoh cites such hypoxic cancer cells as a major obstacle to leading cancer treatments such as radiation therapy and chemotherapy.

"Radiation therapy is highly rated and can be the first choice for many patients outside Japan. Its biggest advantage is that it pinpoints affected areas while being non-surgical and non-invasive, but its major downside is its limited effectiveness against hypoxic cancers."

"Highly resistant to anticancer therapies and with a self-sustained ability to survive, hypoxic cancer cells are like the root of all evil. Detecting and eradicating them at an early stage can surely save many lives, regardless of the cancer type."

Love for research paved the way

Kondoh's childhood experience of being helped through constant illness by medicine gradually shaped her dream of developing medical drugs and led her to a pharmaceutical university. After graduation, Kondoh opted to learn immunopharmacology at graduate school, only to find the lab door tightly closed to women. "The classrooms as well as the labs were closed to me," she reminisces with a smile. So, after casually watching a TV program on immunotherapy in the U.S., Kondoh made a quick decision to enroll at a medical school in New York. She received a one-year scholarship from the Rotary Foundation which helped her cover daily expenses and tuitions fees. Immunology was the popular course at the time, so Kondoh eventually opted for Immunovirology instead. This decision prompted her to specialize in tumor virology at graduate school once back in Japan.

"The Immunovirology course in the U.S. was related to vaccine development research, which differs from the cancer research in which I'm currently involved. Anyway, I was tried and tested in a harsh environment with no special privileges for foreign students with substandard English proficiency. Anyone getting a C, the lowest score on the evaluation scale, was immediately expelled from school." 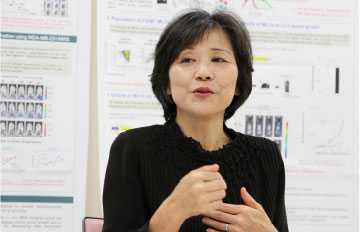 Despite the challenges, Kondoh extended her U.S. stay by two years, completing the master's program in Microbiology and Immunology. Upon returning to Japan, she established cancer research as her specialty at Osaka University's Graduate School of Medicine. After obtaining a doctoral degree, she considered joining a company, but was again discouraged by a comment heard at the company's employment test — Even women with doctoral degrees would be rated no more highly than junior college graduates.

Determined to dedicate her life to research, her passion, she joined a team named Okayama Cell Switching Project owned by the Research Development Corporation of Japan and led by Hiroto Okayama3, her mentor and then researcher at Osaka University. Since then, her efforts have centered on research at universities, including Kyoto University, where she spent time before coming to Tokyo Tech.

Kondoh didn't ignore her private life either. During her years of intense research, she married and had two children, who were entrusted to a nursery on campus. When the nursery later faced the crisis of closure due to the retiring childcare workers and small number of children — three at the time — Kondoh took the initiative to find childcare workers in person, so it could remain open.

"I did it because I had to. I was so busy that I couldn't even take pre- or post-maternal leave. I was involved in an experiment until the day my babies were born," she said with a laugh.

Her efforts paid off and today, the nursery is a refined and well-managed facility.

Even after numerous tests and trials in her advanced research to challenge the modern-day national disease, family life, and childcare, Kondoh's facial expression betrays not the slightest hint of previous hardship when recounting the story. It seems she enjoyed the struggle and therein lies her strength. Her message to students is more enthusiastic than the words that describe her research. 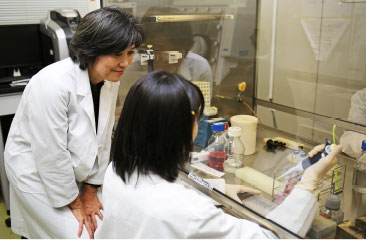 "University life is more about what you do in the process, rather than the results you achieve. Once your learning has finished, the next step is to test your determination to see if you can push through the path you chose. Don't choose the easy job, or because there are many positions available. Use your time at Tokyo Tech to examine your aptitude and reflect on things repeatedly until you are absolutely sure. There is no room for later regrets. To do so, fully absorb what you can learn now and march straight on in the path in which you believe."

Horizontal collaboration transcending research fields is crucial for cancer research. According to Kondoh, Tokyo Tech is "a dream-come-true research venue with many front-runners in materials, information, and machinery research, all of which are indispensable to new medical development research." The day when her ceaseless and insatiable endeavor bears fruit may be close at hand.

Sourced from the "Annual Estimated Total of Vital Statistics of Japan" published by the Ministry of Health, Labour and Welfare. 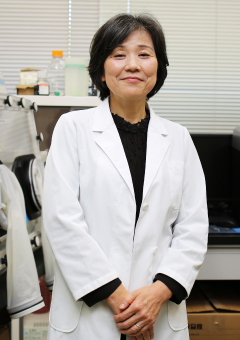