The human body is capable of healing fractured bones by rejoining them, allowing injured, immobilized individuals to become mobile again. This is due to our cortical bones' regenerative capability. 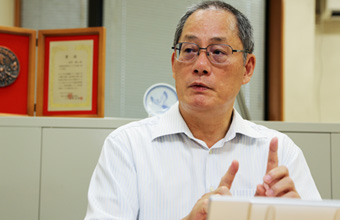 However, if a bone is lost or damaged due to a disease or an injury, it is difficult for the body to regenerate it. Demand for artificial bone has increased in Japan in recent years as a solution to this problem. Professor Junzo Tanaka is a leading researcher who has been devoting himself to the development of artificial bone materials for more than twenty years.

"Bones are much stronger than people think. A bone about the size of a sugar cube can sustain the weight of ten 150 kg sumo wrestlers. However, strength alone is not sufficient for artificial bones to fully integrate with our own bones."

New material made by mixing hydroxyapatite with collagen

Artificial bone was originally designed as a prosthetic material serving as an alternative to autogenous bone1 graft material, which put an enormous burden on patients. Artificial bone was initially made of metals and solid ceramics for strength, but the rigidity of the materials made it difficult for artificial bone to blend into bone tissues, and it could not be used for children for a long period of time. In the 1980s, demand for artificial bone skyrocketed due to the development of artificial bones made of hydroxyapatite (hydroxylated calcium phosphate), a material similar to natural bone, and those made of tricalcium phosphate, a material that can be resorbed and replaced by natural tissue. However, these materials were still too rigid to be processed and adjusted for transplants. Although various forms of materials were developed, such as solid blocks, powder, and pumice-like materials, problems persisted as these materials were difficult to be used in surgical procedures and sometimes got completely absorbed after transplant without leading to bone regeneration.

In 2001, promising research results2 turned the situation around. The research was conducted by Professor Tanaka (head of the Biomaterials Center of National Institute for Materials Science [NIMS] at the time), Dr. Masanori Kikuchi (researcher at the time; currently the Center's group leader), and a research group at Tokyo Medical and Dental University. They were successful in developing a fibrous material made by mixing hydroxyapatite and biomaterial collagen. The resulting material had elasticity that existing artificial bones did not have. Animal testing has already been completed and the safety of the material has been confirmed.

Two types of extracellular matrix, organic collagen and inorganic apatite, form the layered structure of bones. Specifically, bone tissue is formed through the secretion of collagen by osteoblasts and the deposition of hydroxyapatite on the surface of bones. The newly developed artificial bone had the composition and structure that were nearly identical to those of natural bone. 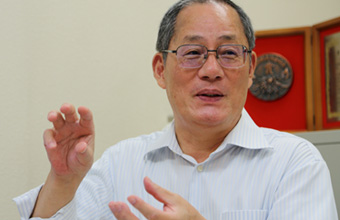 Professor Tanaka: "A chemical bond is formed between collagen and apatite, in other words, between organic and inorganic components of bone. The size of hydroxyapatite crystals is 30 nm and the size of collagen molecules is 300 nm. The nano-level alignment of hydroxyapatite along collagen fibers allows a single material to have tensile and compressive strengths similar to those of natural bone. By taking advantage of the characteristics of the two components, we were able to create a material that is functionally identical to natural bone that bone cells can easy adhere to."

With this, the technology of bone regenerative medicine finally advanced.

A rookie who was assigned the task of developing artificial bone 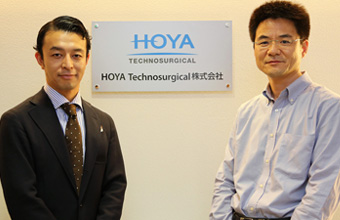 At a seminar on the new artificial bone material developed by Professor Tanaka, one company showed immediate interest in the material. It was Pentax Corporation (now known as HOYA Technosurgical Corporation), a leading company in ceramic artificial bone.

"I was working as a sub-section chief. When I heard about the material, I immediately knew that we would be involved in its development and commercialization. Although composites using polylactic acid and other polymers were being studied, using a composite of collagen and apatite made sense to me because they are naturally found in the human body."

As Mr. Nakajima expected, the company announced that it will develop new artificial bone. Then, in 2003, the project began as part of the commissioned development program of Japan Science and Technology Corporation (JST). To everyone's surprise, the project was assigned to a new employee, Mr. Daisuke Shoji (currently Team Leader, Marketing/Knowledge Management Section, HOYA Technosurgical Corporation), who had just joined the company. 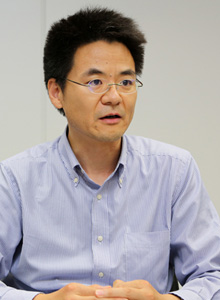 Mr. Nakajima: "As soon as the project started, Mr. Shoji's name came to my mind as the most suitable person to be in charge of it. Since the company had never dealt with collagen before, we needed someone with a flexible mind who was not bound by convention. In this respect, a new employee such as Mr. Shoji was appropriate to lead the project."

Mr. Shoji, who had dreamed of becoming an engineer since he was in middle school, entered Nagaoka University of Technology and studied in the Department of Materials Science and Technology after graduating from a technical college. Unlike his peers, who all took interest in the features of materials and end products, he was interested in the manufacturing process. Perhaps his appreciation for craftsmanship made him the most qualified candidate for leading the project, which required persistence.

Mr. Shoji: "I was determined to do my best as a rookie. I still clearly remember that, rather than feeling anxious, I could not have been happier as a researcher that I could be involved in a project to develop a promising new material for artificial bone."

To prepare for the project, Mr. Shoji was sent to the Tanaka Laboratory at NIMS for one year to learn the necessary techniques for developing artificial bone. 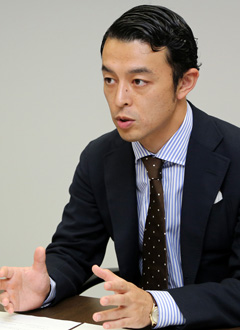 Despite the challenges of storing and conducting experiments on an organic material such as collagen, which decomposes at high temperature unlike inorganic ceramics, Mr. Shoji embarked on the development of artificial bone immediately upon his return to the company. The greatest challenge was deciding on the structure of the artificial bone. After careful consideration and listening to the voices of medical professionals, the team settled for a sponge-like structure, which provided elasticity and ease of cutting. In order to make high-density and uniform pores for bone cells to pass through, they incorporated a technique for creating fine ice crystals, or making ice cream.

Mr. Shoji: "If the pores of a porous medium are too large, elasticity decreases. If the pores are too small, elasticity increases but it becomes more difficult for cells and blood vessels to enter the pores. Therefore, the first point to consider was the size of the pores. In addition, clinical doctors required the material to have a certain level of elasticity. In order to address both of these issues, proper pore size and porosity had to be determined. We tried various methods, primarily focusing on methods used in food processing, including ice crystallization, and repeated animal testing in our best efforts to solve these problems." 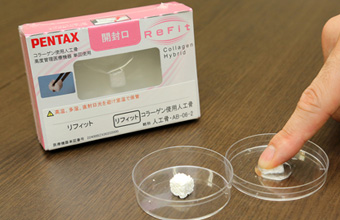 A certain level of effectiveness was confirmed with animal testing and the problems of pore size and porosity had been solved, but immediately before the start of the clinical trial, the team faced a new problem: a revision of the Pharmaceutical Affairs Law. Although some raised their voices to terminate the project, the enthusiasm of management, Mr. Nakajima, Mr. Shoji and other employees kept the project going. After overcoming many difficulties, the first artificial bone using collagen, "Refit," was born in 2013. The project took 10 years to complete. Looking back on the years of fighting an uphill battle, Mr. Nakajima and Mr. Shoji remarked as follows: "Those ten years went by quickly."

Using the regenerative capacity of fish scales to help the elderly

Professor Tanaka, who has contributed greatly to the development of the field of bone regenerative medicine through various research, is now engaged in the study of a promising material with his laboratory colleague, Associate Professor Toshiyuki Ikoma. The material they are researching is fish scales, in particular scales of tilapia, which mainly inhabit fresh and brackish waters in subtropical and tropical zones. 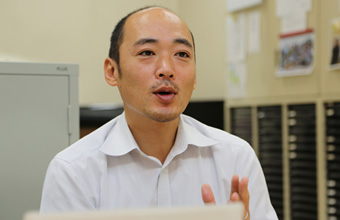 Associate Professor Ikoma: "We were looking for a way to recycle fish scales that get disposed of around seacoasts. That's how our research started. Fish scales are not easily decomposed, and there are those from around 2,000 years ago that still remain today. We first looked at the collagen of sea bream scales through an electron microscope and found that it is very dense. However, since the collagen denaturation temperature3 of sea bream scales is around 30 ℃, and we needed something with a higher denaturation temperature, we looked into the tropical regions and came upon tilapia."

Not all fish scales are viable candidates. The essential requirement is for the denaturation temperature of collagen to be close to or above the human body temperature. Collagen extracted from fishes living in low-temperature water, such as salmon and cod, transforms into gelatin due to its low denaturation temperatures. Collagen of fish scales has a strong tendency to restore to the in vivo state in a process called fiberization, and it has been discovered that cells proliferate well on fiberized collagen, stimulating cell differentiation. Furthermore, cells stick to fish scale collagen much stronger than they do to pig collagen.

Professor Tanaka: "If we can speed up the process of bone regeneration, I believe we would be able to contribute to medical care for the elderly who have diminished osteoblast activity. I can't say for sure, but I believe there will come a day when we can treat diseases such as osteoporosis that many elderly people suffer from."

Associate Professor Ikoma followed up with a comment on further possibilities:

"As you may know, fish are able to regenerate lost scales. This means that, if we can uncover the regeneration mechanism of fish scale, it may also become possible to make materials such as organs and the corneal stroma using fish cells. We are currently collaborating with researchers in the fields of medicine and biology from various universities to uncover this mechanism."

Fish scales may become a part of our eyes and bones. They may even be used to regenerate organs. But one thing is for certain: organic-inorganic composite materials will pave the way for regenerative medicine.

3 Collagen denaturation temperature is the temperature at which triple helical structure of collagen becomes loose and changes into gelatin.