School of Science, Department of Chemistry

For some materials, light can induce a change in state through a process known as photo-induced phase transition. This phenomenon has attracted global attention as a pathway to replacing current electronic devices with ultrafast, low-energy, optical devices.

A domino effect of change with one photon 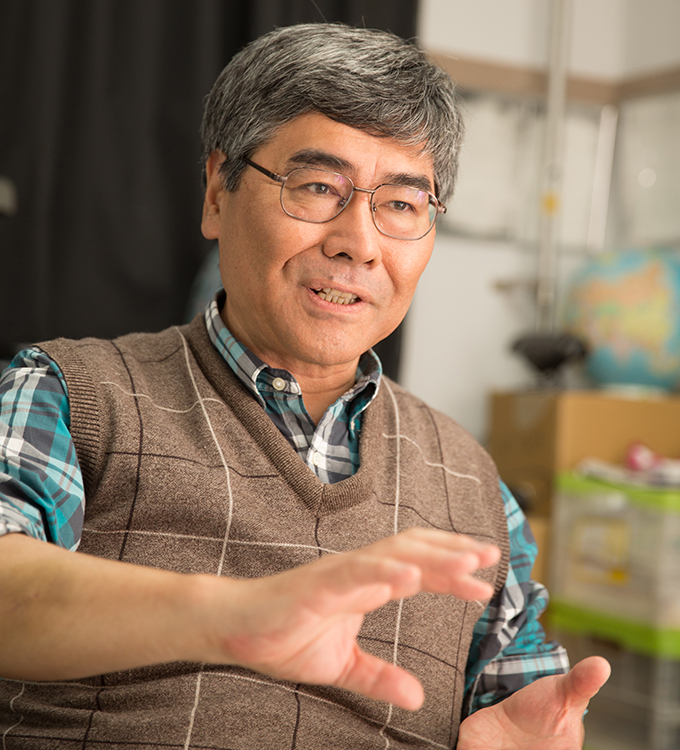 Water can become ice (a solid) or steam (a gas), depending on changes in temperature and pressure. While maintaining the same composition, it can change into different phases — solid, liquid, or gas in a process called phase transition. Interactions between the atoms and molecules of a material, or sometimes even the structure of the molecules of that material, change with external conditions such as temperature, electric field, and magnetic field. This can cause drastic and varied alterations in a substance's characteristics (magnetism, dielectricity, conductivity, thermal properties, etc.).

"Photo-induced phase transition" refers to a change in state of a material through simple exposure to light. If we could create ultrafast, low-energy systems that harness weak light to instantaneously switch insulators into metal or electrically neutral organic substances into ferroelectric1 substances, it would be a realization of never-before-seen photoelectric devices2. Research on such systems is being conducted around the world, and Shinya Koshihara was the first to demonstrate an ultrafast, highly efficient photo-induced phase transition in an organic material. He is also the discoverer of many other substances which exhibit this phenomenon.

"Current electronic devices (mainly memory devices) are driven by phase transitions generated by electric and magnetic fields. About 30 years ago, I had an interesting conversation over dinner with the supervisors and researchers in my lab, where we discussed how it would be great if phase transitions, typically controlled by temperature and electric and magnetic fields, could also be controlled by light. This was the beginning of my current research," says Koshihara.

The ability to induce changes in materials through exposure to light has been known for some time. In fact, photoreaction-driven devices are already in practical use. However, while previous studies showed the change of one molecule with one photon, in a photo-induced phase transition, after one photon changes one electron, a successive change in surrounding electrons continues in a domino effect. This can significantly alter the structure and characteristics of the substance and cause a phase transition. Koshihara calls this phenomenon the photo-domino effect.

"Electronic devices require a tremendous amount of electricity to process and convert information. Heat loss is also large, which raises the issue of whether such devices are sustainable, considering their impact on global warming. Using photo-induced phase transition in memory devices would accelerate the speed at which information is converted by more than 1,000 times, while also significantly saving energy. This is the reason photo-induced phase transition has attracted global attention, even with its wide range of problems, such as material instability," explains Koshihara.

Switching an insulator into a metal in an instant

As a graduate student, Koshihara studied the optical functions of proteins. That was 1991, three years after the "fated dinner discussion" on photo-induced phase transitions. In 2003, he identified the complete mechanism, including the wide-scale, atomic-level structural changes it induced. While conducting joint research with a French university, he learned through structural analysis using X-rays that TTF-CA, an organic crystal, was deformed by light. "Using a special device at the European Synchrotron Radiation Facility (ESRF) in Grenoble, France, we radiated a sample with a pulse laser and then X-rays to analyze the structure in cooperation with a group at the University of Rennes 1. In an extremely short period of time, 100 trillionths of a second, the structure of an organic crystal changed and exhibited the characteristics of a ferroelectric substance. This is like light changing butter into salt. Butter and salt are daily necessities in Europe. University of Rennes 1 was located in Rennes, the capital of the Brittany Region of France, where butter and salt are specialties. Salt butter and caramel are well known too. So when we presented the results of this study, people were very excited," says Koshihara. 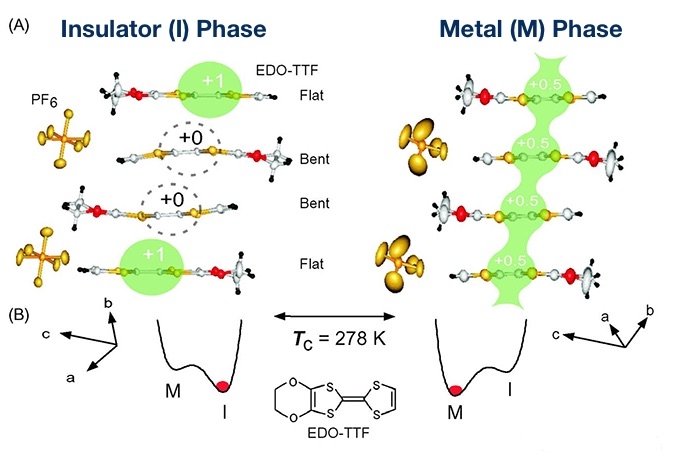 Electrons in (EDO-TIF)2PF6 that do not move at low temperature are excited by light and become free to move without increasing the temperature of the crystal. This causes the material to undergo a phase transition from insulator to metal.

Kyoto University professors Gunji Saito and Hideki Yamochi, were leading experts on superconductivity3. They visited Koshihara with an organic crystal (EDO-TIF)2PF6. Both of them conducted studies on this substance as a candidate organic superconductivity material. Unfortunately, it transited to an insulator when near room temperature and did not exhibit superconductivity. The material was branded a failure. But Saito and Yamochi were very interested in the mechanism of the transitions and asked Koshihara to analyze its structure and characteristics in a photoexcited state.

Koshihara then asked students in his lab to conduct laser experiments to check its reactivity to light. He observed a surprising phenomenon. Only slight exposure caused a phase transition from insulator to metal. Electrons fixed in the organic crystal were excited by the light and flowed out like water to form a metal-like conductor. This happened in just 0.2 picoseconds (two tenths of a trillionth of a second). The sensitivity was equal to one photon generating changes in approximately 50 molecules. It was a photo-induced phase transition.

After the report on this series of studies, research and development on ultrafast, photo-induced phase transitions accelerated around the world. In response to these results, the Koshihara Non-equilibrium Dynamics project was started in 2003 under the Exploratory Research for Advanced Technology (ERATO) program by the Japan Science and Technology Agency (JST).

During the ERATO project, in addition to seeking out new materials that undergo photo-induced phase transition, Koshihara also worked on development of an imaging system to observe the phenomenon's underlying mechanisms. This was in collaboration with Shinichi Adachi, an associate professor at the High Energy Accelerator Research Organization (KEK). Existing devices could not accurately measure the temporal changes in electron distribution and in crystal structures caused by laser irradiation. Therefore, Koshihara and colleagues developed a method called time-resolved X-ray diffraction.

In order to capture the ultrafast photo-induced phase transition, it was necessary to direct a laser beam and X-rays toward the same point of the sample at ultra-high speed. At the KEK synchrotron radiation facility, while inducing a photo-induced phase transition in the sample with a femtosecond (one quadrillionth of a second) laser beam burst, they accelerated the electrons to nearly the speed of light and then irradiated the sample with a 100 picosecond X-ray pulse stream. It was an amazing procedure that took consecutive photos at a shutter speed of 100 picoseconds.

An imaging system, installed at KEK in Tsukuba City, which can take consecutive photos at a shutter speed of 100 trillionths of a second.

After four years of trial and error, Koshihara and colleagues finally developed an imaging system and succeeded in capturing a key mechanism of biological function.

Muscles require oxygen to move, and a protein called myoglobin stores oxygen inside muscle tissue. It was known that the myoglobin molecule has several cavities to store oxygen, as well as carbon monoxide. However, the cavities are not connected to the outside of the molecule. It was not understood how myoglobin takes in oxygen and carbon monoxide from the outside. "In order to observe how oxygen and carbon monoxide enter myoglobin, we needed a monitoring camera," says Koshihara with smile. He identified the pathway with a technique called time-resolved X-ray diffraction. Directing a laser beam onto myoglobin to take consecutive photos with X-rays revealed that photo-induced phase transitions changed the structure of myoglobin molecules one after another, and this connected the cavities through which carbon monoxide traveled.

A dream to freely control physical properties with light

Koshihara also developed time-resolved photoemission electron microscopy (TR-PEEM), a technique allowing visualization of electron dynamics at 100 femtosecond temporal resolution and nanometer (one billionth of a meter) spatial resolution through the project Development of the frontier of nonequilibrium materials leaded by optical science adopted by the JST CREST program in 2009. This technique allowed him to capture the movement of electrons on the surface of semiconductors every 100 femtoseconds. He also observed the distribution and movement of electrons on the surface of (EDO-TTF)2PF6, which has been increasingly regarded as an organic optoelectronic material, and how they change with exposure to light. 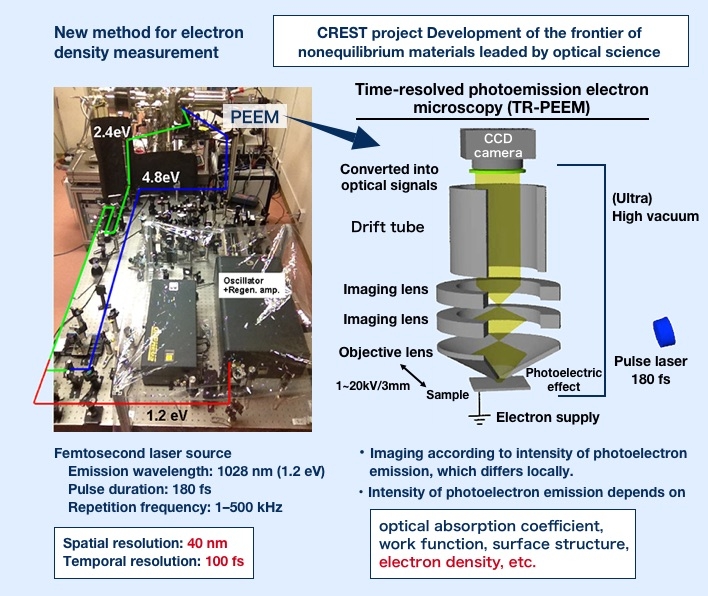 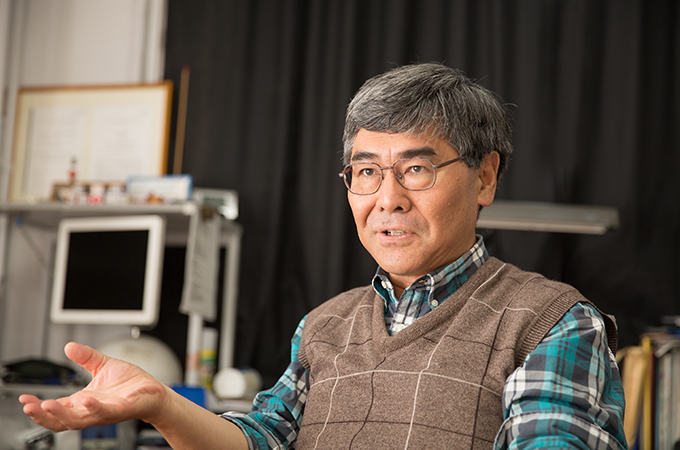 In recognition of these achievements, Koshihara was awarded the Humboldt Prize, which is given to outstanding scientists and scholars working outside of Germany. Since then, he has further accelerated the speed of his work. It was thought that light could precipitate phase transition from insulator to metal, but not metal to insulator. However, in October 2015 it was shown that a 0.1 picosecond pulse laser burst on ladder-type copper oxide crystals that had transitioned into a metallic state after exposure to light could change back into an insulator. Here, not only could dominos fall, but they could also stand up again. This suggested the applicability of photo-induced phase transitions to next-generation switching devices capable of turning on and off optically at ultra-high speed without the need to convert optical signals to electric signals. 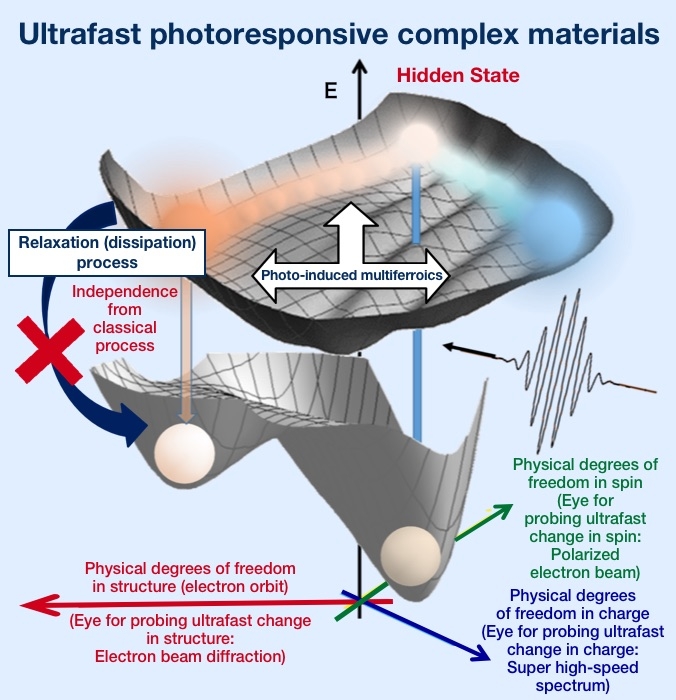 Koshihara concluded by explaining the real pleasure of his research. "Nowadays, studies are being conducted that use AI to identify new materials. However, entering into an unexplored field, one without established standards to tell you how to proceed, and then succeeding in changing butter into salt with light is something that I believe only humans can accomplish. Such exciting ideas and discoveries are the best part of my work. With increasing global competition in research and development, I want young researchers and students to hurry, but also be patient. Youth passes quickly as presented in the song of students 'Gaudeamus igitur'. If you have a dream, you should do everything you can to work toward it. However, if you are in too much of a hurry, you may miss important clues and fail. Be patient when pursuing your dreams, and your achievements will become treasures for the future."

A phenomenon of exactly zero electrical resistance occurring in certain materials when cooled below a characteristic critical temperature. 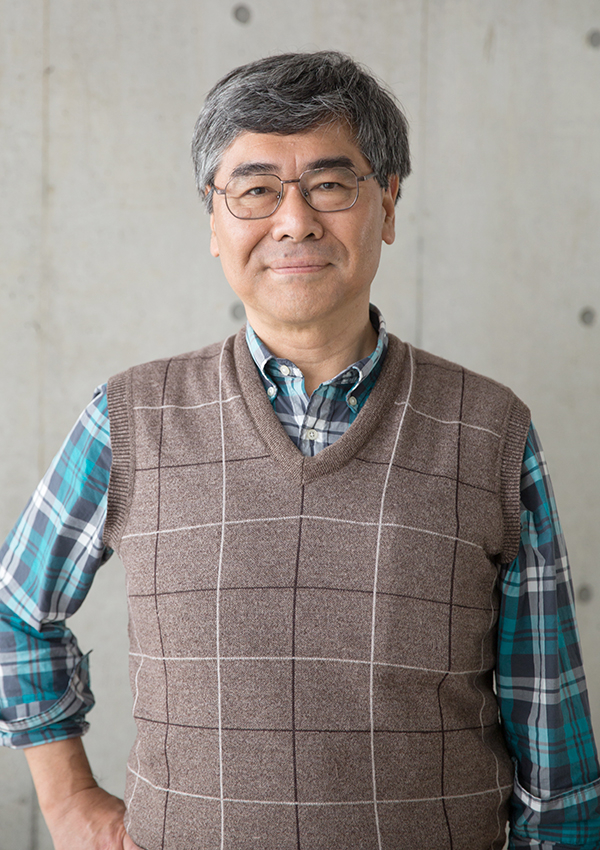