Dr. François Englert and Dr. Peter W. Higgs were awarded the 2013 Nobel Prize in Physics "for the discovery of a mechanism that contributes to our understanding of the origin of mass." They are more generally known for having predicted the existence of the Higgs particle.

Dr. Englert and Dr. Higgs' achievements in the understanding of the "origin of mass"

The Higgs particle, or Higgs boson, offers direct evidence of the major evolution (known as "phase transitions") of our universe immediately following its creation. The phase transitions enabled all kinds of particles travelling at the speed of light at the birth of the universe to decelerate, thus giving mass to elementary particles. This mechanism for bestowing mass to particles, known as the Higgs mechanism, is responsible for the formation of atoms and molecules, for the development of stars and galaxies, and for our very existence. Therefore, the Higgs mechanism underpins one of the most important developments in the early stages of the universe.

Dr. Englert and Dr. Higgs developed the mechanism independently in 1964, nearly 50 years ago. At that time, the foundation of the Standard Model of particle physics, which is now universally accepted as a physics theory, had been laid, but the theory was still incomplete as it could not explain how elementary particles acquired mass. It was Dr. Englert (together with his now deceased colleague Dr. Robert Brout) and Dr. Higgs who cleverly provided the solution to this question. There are a number of interesting episodes regarding the naming of the Higgs boson, which will be omitted here for the sake of brevity, but its history is definitely worth looking into.

Dr. Englert and Dr. Higgs theorized a mechanism where all elementary particles gain mass through interactions with the "Higgs field," which is closely associated with the Higgs boson. The mechanism ingeniously explains how the Higgs field gives mass to both particles that constitute matter as well as particles that mediate forces interacting among particles. 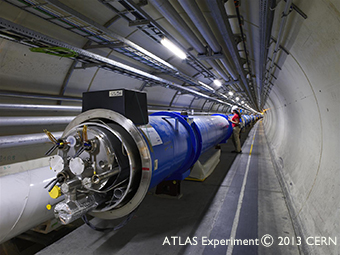 Figure 1. The vacuum pipes of the accelerator located 100 m underground forms a ring with a circumference of 27 km. The photograph shows how the pipe is curved. Protons are accelerated to 99.999999% the speed of light. To bend the proton beams, the vacuum pipe is covered with superconducting magnets of 8.3 teslas. The blue tube is the outer cover.

Is such an elaborate mechanism actually at work in nature and in our universe? That would need to be verified. To do this one would have to artificially create the Higgs particle. Creating the Higgs particle would require an amount of energy, which particle accelerators of the past were incapable of producing.

The Large Hadron Collider (LHC) at CERN, the European Organization for Nuclear Research, in Geneva, Switzerland, was constructed especially for that purpose (Fig. 1). The LHC creates previously unknown particles of considerable mass by accelerating protons to an energy of 7 teraelectronvolt (TeV)∗ and then making them collide inside a laboratory. The huge cylindrical ATLAS detector, measuring 25 m in diameter and 44 m in length (Fig. 2), is located at a point of collision for the two accelerated proton beams traveling in opposite directions. The ATLAS detector captures snapshots of the collisions like a digital camera. If the LHC were a digital camera, it would have a resolution of 160 million pixels and a shutter speed of 1⁄40 millionth of a second. 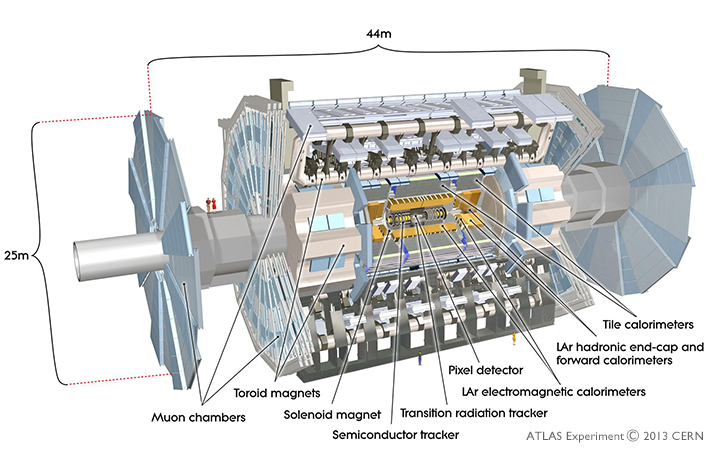 Figure 2. The human figures at center left show how large the ATLAS detector is. It is closely packed with state-of-the-art detector components, including powerful superconducting magnets, a semiconductor tracker, a calorimeter for measuring energy, and a multi-wire gas detector. 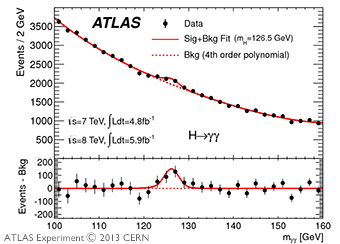 The ATLAS experiment looked at cumulative data it collected over three years, from 2010 to 2012. Simultaneously, in a number of observations made by ATLAS for different decay channels, it was revealed that without the Higgs boson, the outcomes could not be explained (Fig. 3). The observed masses of the Higgs boson were also consistent within a statistically consistent range. The CMS detector, one of three other CERN detectors located at another point of collision in the LHC, also recorded the same deviations. Having established sufficient statistical significance, ATLAS and CMS jointly announced the "discovery of a new particle" in July 2012.

Unit of energy in elementary particle physics. Tera (T) denotes multiplication by 1 trillion (a factor of 1012). 1 eV is the amount of kinetic energy gained when a single electron is accelerated by a potential difference of 1 volt.

Japan has been involved with the LHC project ever since a decision was made in 1994 to build the LHC. Both in terms of technology and funding, Japan was indispensable to the success of the project. The High Energy Accelerator Research Organization (KEK) contributed its advanced accelerator technology for the construction of the LHC accelerator. The LHC uses KEK's quadruple superconducting magnets at the collision points.

For the ATLAS experiment, a Japanese ATLAS Group with members from 16 Japanese institutes has been involved from the planning stages of the project, through designing, developing and constructing the ATLAS detector which plays the central role in the experiment. The Japanese group developed the semiconductor tracker in the inner detector, the solenoid superconducting magnets that surround the inner detector, and the largest muon spectrometer ever made in history that is installed in ATLAS. In terms of hardware, the group also made substantial contributions in the construction of the computing center used by scientists from around the world for data analysis. The group also contributed in terms of the software used for the operation of the ATLAS detector and for physics data analysis.

Tokyo Tech joined the ATLAS experiment in 2009. As one of the core universities in the Japanese ATLAS Group, the Institute collaborates with KEK in developing, evaluating, maintaining and operating the ATLAS semiconductor tracker (Osamu Jinnouchi Laboratory). Tokyo Tech also leads the development of the trigger system required for data collection (Masahiro Kuze Laboratory). Tokyo Tech faculty members as well as graduate students travel abroad frequently to work at CERN, give presentations at international conferences, and engage in joint research with other scientists. Tokyo Tech's students have earned the respect and trust of young scientists from other countries for their precision, persistence, and passion for physics research.

Now that the Higgs boson has been found, the next challenge for the LHC will be to discover yet more new particles. Scientists believe that within the high-energy regime of the LHC, they will begin to find lapses in the Standard Model of particle physics. They predict that such lapses will lead to the discovery of some or even many new particles. It is also believed that the newly discovered Higgs boson is closely associated with such "new physics." Physicists have already suggested using the Higgs boson as a tool, rather than the target, of exploration, and have proposed methods to identify flaws in the Standard Model.

Because the existing LHC accelerator and detectors are limited in capacity for making the next major discovery, they both require radical upgrades. The LHC will continue to make observations until around 2030, while undergoing a series of technical upgrades. In 2015 the upgrade that is currently under way is expected to produce collisions at 14 TeV, which is the highest energy it can achieve with its current design constraints. (The LHC was producing only 8 TeV of energy in 2012). This increase will substantially increase the sensitivity for new physics in LHC experiments. We do not know if the next major surprise is just around the corner or will remain hidden for another 10 years. What is certain though is that the LHC will markedly increase our understanding of the universe within the next 15 years.

Following the 2013 Nobel Prize in Physics, the organizers of Japan's research project, "Particles physics opening up the tera-scale horizon using LHC," will co-host a public lecture with Tokyo Tech's Department of Physics in the Graduate School of Science and Engineering and the International Center for Elementary Particle Physics (ICEPP) at The University of Tokyo. Japan's research project is funded by the MEXT's Grant-in-Aid for Scientific Research on Innovation Areas.

The lecture will explain the LHC experiments, the Higgs particle, and the future of elementary particle physics in plain language. It is open to the public. Junior and senior high school students are welcome. 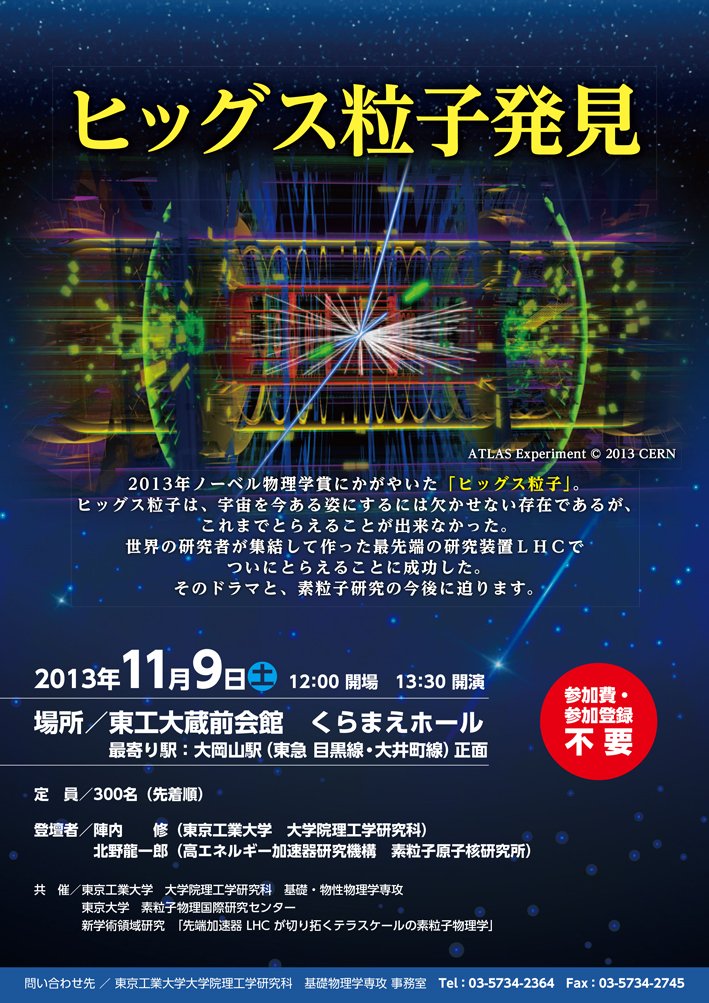