Professor, Department of Electrical and Electronic Engineering, School of Engineering
Dean of the Tokyo Tech Academy for Super Smart Society

In 2020, full-scale commercial service is launching for the new wireless communication standard known as 5G (5th generation mobile communication systems). Kei Sakaguchi, a professor in the Department of Electrical and Electronic Engineering, School of Engineering, and Dean of the Tokyo Tech Academy for Super Smart Society, proposed technology that forms the basis of 5G and worked on its international standardization. Currently, Sakaguchi is working to create a 5G-driven "Super Smart Society".

In January 2007, the smartphone era began with the release of the Apple iPhone. After that, SNSs such as YouTube and Instagram began to spread, and everyone began downloading and uploading large amounts of data using their smartphones and other mobile devices. That has rapidly increased the data (traffic volume) that mobile devices send via base stations, doubling it annually.

"If this situation continues, it's easy to predict an increase by a factor of about 1000 in 10 years. In order to address this situation, I thought we need to immediately work on introducing new frequencies and communication standards." That's what motivated Sakaguchi to start on 5G research. He proposed using "millimeter wave" (mmWave) for new radio wave frequencies.

Resolving the trade-off between high-speed communication and connectivity

2010 was the year when commercial service was launched for 4th-generation "4G", which is currently commonplace.

4G mainly uses frequencies of 2 GHz or lower. On the other hand, raising the frequency and using a wider bandwidth enables higher speeds and high capacity communication. Therefore, everyone realized that higher speeds and high capacity can be achieved using mmWave, which use a much higher frequency than 2 GHz. However, raising the frequency is not easy. This is because of the trade-off between frequency and the distance radio waves can reach (connectivity). If the frequency is set higher, the radio waves do not reach far enough and communication will be prone to interruptions. For that reason, 4G focused on connectivity rather than high speed and high capacity, using lower frequencies to avoid communication interruptions.

"However, there were limits to the continued use of low frequencies. So I searched for a way to overcome the trade-off of using radio waves. Then, one day in 2012, I suddenly came up with the idea to just use both." (Sakaguchi)

In fact, in Japan there was a time when R&D of communication systems using mmWave was being promoted nationally. However, development proved very difficult, and with no prospect of commercialization, the Great Recession struck in 2008. Many of the research institutions participating in the project were forced to withdraw. "The mmWave research that we had cultivated over so many years was going to be wasted. So I was determined to bring mmWave into practical use." (Sakaguchi)

Adapted from "Principal Uses and Characteristics of Radio Wave,"
Telecommunications Bureau of the Ministry of Internal Affairs and Communications website.

"In 2012, many mobile operators were concerned that the traffic volume would increase by a factor of about 1000 in 10 years. But 4G had just begun, so the focus was on improving the performance of 4G. They were not yet serious about the development of 5G. Therefore, I carved out a path for mmWave by calculating how much we could increase the total traffic volume that mobile communication systems can handle. Showing the concrete calculations made clear the need for mmWave 5G." (Sakaguchi)

Against this backdrop, in September 2013 Tokyo was selected as the site of the 2020 Olympic Games. Since the Tokyo Olympics is a great opportunity to showcase new applications enabled by 5G, 2020 was chosen as 5G Year One that same winter.

Then, in order to realize his idea, Sakaguchi developed a method of superimposing a large number of mmWave base stations with small coverage on microwave base station coverage. This method is called a "heterogeneous network". Compared to 4G, it provided about 100 times higher speed and capacity, 1/10 lower latency, and 100 times more simultaneous connections.

A "heterogeneous network" superimposes a large number of mmWave base stations with small coverage on microwave base station coverage. Microwaves are used for control signals where connectivity is important, and mmWaves are used for data signals where high speed and high capacity are important, achieving both connectivity and high speed / high capacity.

In response to this achievement, in April 2019 the Ministry of Internal Affairs and Communications allocated mmWave in the 28 GHz frequency band to four domestic mobile operators as the first phase of 5G. Thus in 2020, full-scale 5G commercial service has started.

In addition, the Ministry of Internal Affairs and Communications has also assigned mmWave for 5G used in private spaces such as stadiums, factories, and schools under the name "local 5G". This is expected to accelerate the spread of 5G in one fell swoop.

5G is essential for realizing automated-driving cars
What are the safety requirements?

What kind of future society will be created with the spread of 5G? "When mmWave was selected as a 5G candidate at ITU-R in 2015, the first killer application I thought of was its application to automated-driving cars." (Sakaguchi)

At the time, Sakaguchi was enrolled at the Fraunhofer Society in Germany, the largest applied research institute in Europe. He proposed a project to apply 5G to automated driving and succeeded in obtaining a budget. Along with this, a project on the international standardization of wireless communication that utilizes mmWave 5G for automated driving was started.

Sakaguchi said that its application to automated driving first required us to quantitatively show why ultra-high-speed, high-capacity wireless communication is necessary for automated -driving cars.

Normally, there are speed limits on roads, and it is necessary to keep an adequate inter-vehicle distance between cars. That is in order to ensure safety. The driver needs to detect objects whose distance is equal to or greater than the braking distance, which is the distance traveled from when the brake pedal is pressed to when the braking is stopped, based on visual information. This means that driving safety can be improved by obtaining a large volume of data at low latency. "There was no theory to date that correlates data volume with safety, so we created a new theory. For the first time anywhere, we showed theoretically how much data is required to ensure safety, and that 5G is essential for automated driving." (Sakaguchi)

Currently, Sakaguchi is working on "V2X" research aimed at the commercialization of safe automated vehicles. V2X is an abbreviation for vehicle-to-everything, which is communication from cars to all sorts of things, such as car to car, and car to network. With V2X, in the near future cars will be able to wirelessly communicate with nearby cars, various devices installed on the road, pedestrian mobile devices, etc. without the need for intervention by the driver. This will enhance the safety of automated driving.

Research on V2X (vehicle-to-everything) for the realization of automated driving.
V2X will allow for communication from car to car, car to network, and other linkages.

"The higher the speed, the more data you need for automated driving. Therefore, it will first be put to practical use in vehicles that run at low speeds such as tractors. In addition, this can also eventually be applied to drones, robots, cities, societies, etc. We call this kind of future a "Super Smart Society" enabled by 5G." (Sakaguchi)

Components that enable automated driving include various sensors such as cameras installed in vehicles, a database (map) containing map data of the surroundings, edge computing for driving from sensor data and map data (MEC: decision server), and artificial intelligence (AI) that collects information from multiple vehicles and analyzes big data.
The vehicle is controlled by transmitting and receiving data between these components via 5G at ultra-high speed and low latency. When humans drive, humans can only control the vehicle, but with automated-driving cars it is also possible for neighboring vehicles to work together on control. In addition to vehicles, Sakaguchi is aiming to expand the actuators (applications) to drones, robots, cities, and societies.

Is life trapped on a tiny smartphone screen real happiness?

"With 5G, we have arrived at a special point in wireless communication technology by being able to handle high-frequency radio waves. We believe that this will be applied to 5G and beyond. However, I think that its uses are still developing. For example, if a person from the Edo period were to see a modern person looking at a smartphone screen on a train, they would surely feel sorry for them. In the long history of humankind, the current situation of being trapped on the tiny screen of a smartphone is by no means happiness. My research is to think about what things should look like, how to change society, and then to create this vision." (Sakaguchi) 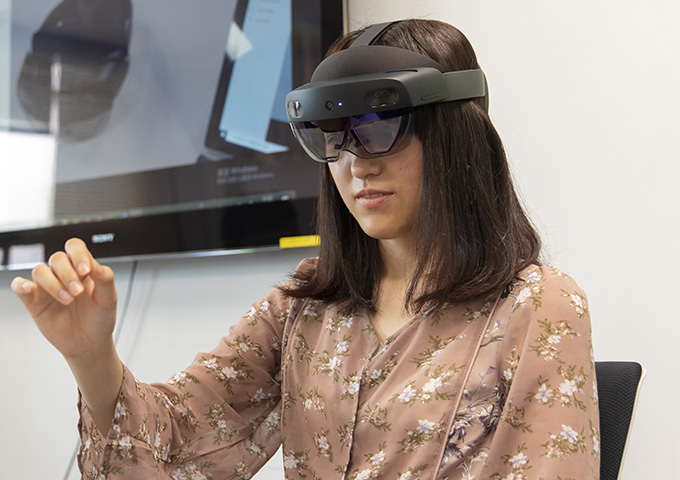 "AR glasses" by Sakaguchi for use in research and development. By wearing the glasses, virtual information is superimposed on the real world.

"You currently get search information on the screen of your smartphone, but I'd like to eventually eliminate that kind of thing. For example, the goal is that the first time a person comes to Tokyo Tech, when they stand at the entrance of the campus, the AR glasses will automatically display the campus map of Tokyo Tech and directions to destinations." (Sakaguchi)

The important part of these information devices is the platform that supports services. Therefore, Sakaguchi is currently researching how to build a platform that can provide inexpensive and easy-to-use services.

"You often see statements like, 'We increased efficiency by 10%.' But I'm not interested in small improvements. My primary concern is how to use wireless communication technology to solve the ultimate problems that society faces. I always conduct research with that in mind. For example, natural disasters such as floods have become more serious in recent years. In response, we are thinking of making the house itself an autonomous vehicle and letting the whole house evacuate in the event of a flood." (Sakaguchi)

Human resources that will enable the future

The reason why Sakaguchi became a wireless communication researcher dates back to high school. "I was playing music in a band, and the wires were troublesome. So I wondered if I could make everything wireless. In fact, as a researcher, I think that research is as much art as music, cooking, or sports. Only through constant practice and trial-and-error can you produce excellent results and impress people. There is no shortcut to success other than steady daily efforts." (Sakaguchi)

At the Tokyo Tech Academy for Super Smart Society, the Smart Mobility Research and Education Field provides opportunities, such as testing automated-driving cars on campus, to gain an overall view of technology for realizing automated driving.

Sakaguchi encourages young people who are entrusted with the future. "The future that wireless communication technology will enable is still to come, so you can follow your ideas wherever they take you. Not relying on common knowledge or cheap tech tricks, and not yielding to the people around you. I hope that you will pioneer the future with ideas that you believe in."