Department of Transdisciplinary Science and Engineering, School of Environment and Society

Life on Earth has survived 4 billion years of change. Including forms of life that have become extinct, our planet has been home to some 30 million species. Various biotic communities interact with each other and also with the surrounding environment. Such an interacting system is called an ‘ecosystem’. Its soundness may not be maintained if the balance in the ecosystem is disturbed by human impacts on it.

Professor Kazuo Nadaoka and his research group have conducted surveys and research on coastal ecosystems with a focus on their conservation for about twenty years. Specifically, they have surveyed and analyzed ecosystems in tropical and subtropical coastal areas, mainly coral reefs, with the aim of conserving them from a wide range of environmental threats and feeding their research output back to the local communities which rely on ecosystem services.

"Coral reef ecosystems are at greatest risk. At the 10th Meeting of the Conference of the Parties to the Convention on Biological Diversity (CBD-COP10) held in Nagoya in October 2010, participating countries adopted targets collectively known as the Aichi Biodiversity Targets. In one of the 20 targets, the coral reef ecosystem is specified as an ecosystem requiring urgent conservation action. Coral reefs are typical ecosystems that indicate their vulnerability to various environmental stresses caused by human activities and climate change," Nadaoka says.

Nadaoka points out that coral reefs in tropical and subtropical zones are threatened by a wide range of complex factors, which include not only global-scale factors such as climate change, but also various local-scale human-induced environmental issues. 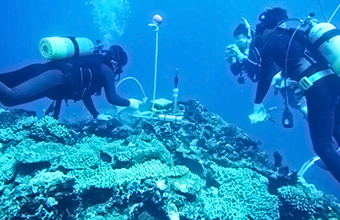 For example, coral reef ecosystems in Okinawa, Japan are facing threats of red-silt runoff from adjacent land areas and excessive nutrient discharges, which are thought to cause outbreaks of crown-of-thorns starfish (Acanthaster planci), known as typical predators of corals. Furthermore, coral bleaching, which results mainly from rising water temperatures, has also produced significant damage. This phenomenon was damaging to the Ryukyu Islands particularly in 1998 and 2007. Most recently, 2015 and 2016 have seen the worst coral bleaching in history throughout the world.

"Coral is a sessile animal that eats plankton, which it catches with its tentacles. However, this provides only a limited part of the energy required for it to live. The remaining part is obtained from photosynthetic algae called zooxanthellae, which live within the coral tissue. Bleaching occurs when these symbiotic algae lose their pigment under, for example, thermal stress caused by high water temperature, turning the coral completely white," Nadaoka explains.

Loss of pigment in the photosynthetic algae means that they are incapable of photosynthesis. The nutrients required by the coral are no longer available, eventually leading to starvation and death. The death of the coral significantly interrupts the entire food chain in the ecosystem. The negative impacts are immeasurable.

The professor continues, "From the view point of controllability, we have to presume that global warming will continue for a few decades and hence the risk of coral bleaching will increase further. From this perspective, the so-called ‘resilience’ of ecosystems becomes important for ecosystem conservation. Namely, abnormally high seawater temperature in summer, which may cause coral bleaching, will occur once every few years and even more frequently in the future. With this in mind, it is of great importance that we consider how to accelerate the recovery of coral reefs after each bleaching event, that is, how we can increase resilience. In order to achieve this, it is necessary to reduce local anthropogenic impacts on coral reef ecosystems such as the inflow of red clay and excessive nutrients from surrounding areas. Unfortunately, ecosystem resilience is declining. It is therefore our immediate mission to take effective measures to stop this declining trend." 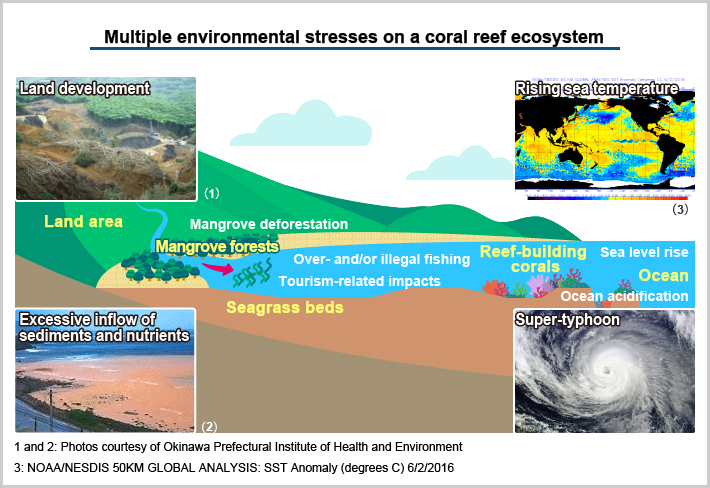 In addition to Okinawa, Nadaoka has established and managed a wide range of projects in other areas of Japan and Southeast Asia with the aim of realizing a sustainable and resilient socio-ecological system (SES) as an effective framework for conservation and restoration, including disaster prevention, of coastal ecosystems at risk. 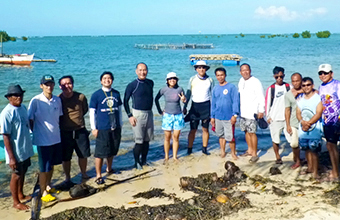 With local participants in the CECAM project

Nadaoka put enormous efforts into implementing the project results in local communities and the central government by holding site-based meetings and related activities. In these attempts, he realized that sharing a sense of crisis among stakeholders, based on scientific evidence generated by the project, was the key to motivating people to take effective action for ecosystem conservation.

"There is a beautiful beach resort in Boracay Island, which is located in the central Philippines. The beach, however, is experiencing severe erosion, putting the island's valuable tourism resource at risk. Our surveys and analyses clarified that excessive development for tourism had damaged the coral reef ecosystem in front of the beach and led to this erosion. If profit-seeking tourism continues in this way, the deterioration of the ecosystem will progress and the beach will disappear. In order to enhance local people's awareness about the importance of sustainable tourism development, it was necessary to communicate with them by sharing scientific evidence obtained in the project about this causal relationship."

The CECAM project officially ended in February 2015. More recently, a new SATREPS project for Indonesia and the Philippines entitled the Comprehensive Assessment and Conservation of Blue Carbon Ecosystems and their Services in the Coral Triangle (BlueCARES), which was adopted in May 2016, is now being prepared for full-scale implementation around March 2017. Nadaoka is the principal investigator. The project focuses on blue carbon, biological carbon sequestrated in coastal-marine ecosystems, and aims to establish and propose a Blue Carbon Strategy for enhancing local efforts to conserve the coastal ecosystem and improve its resilience, thereby contributing to the mitigation of global warming. 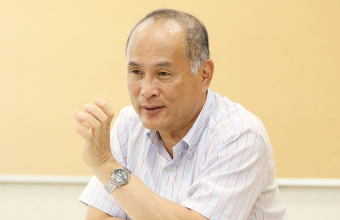 Nadaoka comments, "The benefits we get from ecosystems are known as ecosystem services. If we focus on improvement or enhancement of only one aspect among various ecosystem services, the soundness of the ecosystem may not be maintained. It's far from simple. For example, increasing the mangroves or seagrass beds may improve the blue carbon function; but doing so alone may adversely affect the ecosystem and, for example, reduce the fish catches in the area, an important factor of ecosystem services. In the BlueCARESproject we will comprehensively evaluate a wide range of ecosystem services that local societies benefit from, and formulate plans that collectively maximize these services. After that, we can proceed to apply these plans to some local communities as pilot models. If we can demonstrate success, such plans can then be expanded to other local communities. This is what we are aiming to do."

He continues, "The coral triangle, the target area of the project, is located around Indonesia and the Philippines and has the world's richest ecosystems with high biodiversity. Unfortunately, however, various anthropogenic impacts have accelerated their deterioration. In addition to corals, seagrass beds and mangroves have also been heavily damaged. As a researcher, I hope to contribute to the establishment of specific measures to realize both effective conservation of the ecosystems and sustainable development of the regions."

When is research truly complete?

Nadaoka was engaged in physical oceanography and coastal engineering before he started research on conservation of coastal ecosystems. After graduating from the master's program in civil engineering at Tokyo Tech, he spent the next five years as a researcher at the Port and Harbour Research Institute of the former Ministry of Transport.

In 1983, Nadaoka returned to Tokyo Tech as an assistant professor as requested by his former academic supervisor, Professor Emeritus Mikio Hino. The turning point, however, came in his late 30s in Okinawa, where Nadaoka was dispatched to teach an intensive course on fluid dynamics at the University of the Ryukyus.

"I gave the students their final assignment at the end of the course. I asked them to write about two water-related issues in the Okinawa Islands. I was surprised to find that most of the students brought up the issue of red clay runoff from land into adjacent coral reefs, along with water shortages in the Islands. At that time, I had been thinking about the need for integrated approaches combining the study of land and coastal oceans for properly tackling coastal environmental problems. I took, therefore, strong interest in the problems in Okinawa."

Inspired by the students, Nadaoka has today become one of the leading researchers in the search for environmental solutions that reflect both global and local viewpoints. He has a message for Tokyo Tech students, the same message he has always given to the students engaged in research with him:

"Rather than simply be shown or presented, research findings are best used for establishing concrete plans of action towards a sustainable environment and improved society. For such plans to ultimately succeed, it is also necessary to include people of the community and government in discussions to deepen trust and cooperation, and to ensure proper coordination until actual implementation is reached. This ability to put findings to practical use is extremely important for researchers."

School of Environment and Society
—Adapting Environments to Shifting Attitudes—

Information on School of Environment and Society inaugurated in April 2016