Department of Chemistry, School of Science

Frontline of research on total synthesis of natural organic compounds

It is hard to imagine today's world without the medicines that keep us healthy or the plastic products that bring convenience to our everyday lives. Despite their diversity, these products — called organic compounds — share the feature of a carbon skeleton making up their backbone. In addition to itself, carbon also bonds easily with elements such as hydrogen, oxygen, and nitrogen, making the number of potential organic compounds formed through the combination of these elements infinite.

Except for water and minerals, our bodies are composed mostly of organic compounds, with the sixty trillion cells in each of us surrounded by nucleic acids, proteins, carbohydrates, and fats working in concert to maintain life. When this harmony is disturbed, illness usually results. In the past, our ancestors sought cures in their natural environment. They found through experience that natural organic compounds in animals, plants, and microorganisms had special qualities and benefits. 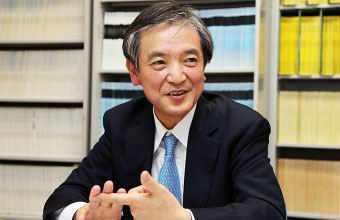 The problem was that many of the most effective ingredients of these were rare in nature and hard to come by. In today's world, the artificial synthesis of organic compounds is commonplace, but this was not the case before the late nineteenth century. It wasn't until 1882 that German chemist Friedrich Wöhler1 accidentally discovered that an organic compound, urea, was produced when he heated an inorganic compound — ammonium cyanate — in a test tube. This marked the birth of artificial organic synthesis and the beginning of a new area of science. Today, organic compounds artificially produced from coal and petroleum, fabrics, and highly functional materials such as organic electroluminescence materials are indispensable in our daily lives. Added to these are the numerous designed and synthesized pharmaceuticals inspired by the structure of natural organic compounds.

According to Professor Keisuke Suzuki, "There is a fine line between a drug and a poison, and it is often the case that natural organic compounds are both bioactive and toxic. If we change the molecular structure, however, we can increase bioactivity and decrease toxicity. Take ivermectin, for example, a compound discovered by Nobel Prize winning Japanese biochemist Satoshi Omura. Its discovery made it possible to prevent blindness caused by onchocerciasis, a parasitic disease affecting millions in Africa. Ivermectin was developed by hydrogenating avermectin, a product of microorganisms in soil samples collected in Shizuoka Prefecture. This massive potential is what makes organic synthesis so attractive."

While the above modification of natural product structures is called relay synthesis, there is another distinct approach known as total synthesis. Starting from scratch, that is, with simple easily available materials, researchers seek to synthesize compounds with complex structures via a number of reactions, a process called multistep synthesis. The synthesis of compounds with complex structures requires the selection of suitable starting materials, the application of appropriate reactions in the appropriate order, and the selective cleavage and recombination of chemical bonds, all of which present quite a challenge. Suzuki sought to meet these challenges as a pioneer in the field of organic synthesis.

There are two major facets of organic synthesis research — the development of reactions utilized in synthesis and the strategic planning to combine synthesis reactions. In terms of the former, Suzuki developed innovative methods for the construction of carbon skeletons and stereocontrolled synthesis2 utilizing chemical species with high reactivity such as benzyne and nitrile oxide. In terms of the latter, he successfully achieved a wide variety of syntheses targeting the hybrid structure of natural organic compounds, in which structural complexities derive from different biosynthetic pathways such as carbohydrates, terpene (biological material produced by a variety of plants, insects, and fungi), and polyketides3.

Suzuki says that organic synthesis is like working a jigsaw puzzle. Imagining the completed form of the compound he wants to create, Suzuki then takes the pieces apart in his brain, designs a combination of pieces, and rebuilds the structure. This is not, however, as easy as it sounds. In order to construct a complete compound, three elements are essential.

Of primary importance is the design of the basic skeleton. As mentioned, organic compounds consist of carbons. However, these carbons have a wide range of structures. Higher fatty acids such as linoleic acid have a linear chain structure while steroids have a multi-cyclic structure. The first step in the synthesis of compounds is to understand the basic skeleton of the molecules to be produced and search for a method of construction.

The third important element is stereochemical control. Suzuki explains this using the flounder as an example. Some flounders have eyes on the left side of their heads while others have them on the right. "Flounders are similar but completely different," he says, "which makes them wonderfully analogous to our research. If we want to make a flounder with eyes on the left side, we need to make a structure specific to that left-eyed species and add some meat to complete the body. The key to successful synthesis is the combination of three elements — creating carbon skeletons, arranging functionalities, and controlling stereochemistry." 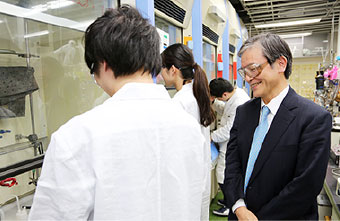 It sounds easy, but there are many difficulties in the process of synthesis. Teruaki Mukaiyama4, Suzuki's mentor at the University of Tokyo, focused on the development of new reactions because he saw this as the way to produce something from nothing. He complimented this with synthetic studies, which he saw as the way to apply results from the new reactions to other bigger possibilities. This thinking motivated Suzuki to pursue the development of reactions. He was also secretly looking into synthetic studies, which at the time were unrelated to his graduate work. His experience in both fields, however, boosted his research work after he accepted a position at Keio University.

In reality, reactions and syntheses are two sides of the same coin, which means that we need both in our research. It is really just like mountain climbing. The development of reactions is like the preparation for the climb, while making synthesis plans is like selecting a route. It takes good equipment and the right route to make it to the top. Suzuki mentions another challenge that needs to be overcome before the summit of the mountain can be reached.

"Molecules with complex structures have strong characteristics and are hard to manipulate. Returning to our analogy of mountain climbing, it's like we are facing an obstacle preventing us from making the final push to the summit. I have experienced such obstacles in my work and have broken through. In research, just as in mountain climbing, reaching the peak is the greatest reward."

The challenge lies in the acquisition of pure compounds. Natural organic compounds with complex structures are chemically unstable and often hard to purify due to their special characteristics. In addition, if the target compounds are water-soluble, everything becomes even harder in terms of synthesis and final purification. This interferes with the synthesis of natural organic compounds with complex structures, which is a challenge for the future.

Nature is testing us 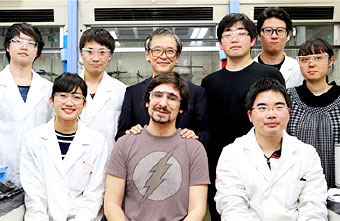 "Many molecules that play specific roles in nature have attractive structures. We aim to produce such molecules through organic synthesis. Although nature has no difficulty in creating such molecules, we are forced to endure the process of trial and error. We sometimes feel that nature is testing us. It is this difficulty that appeals to me. Every day is a new intellectual challenge," Suzuki, who is now engaged in the synthesis of safflower pigments and antibiotics, says.

In 2015, Suzuki's research was recognized with the Japan Academy Prize. "I was deeply honored to receive such a prestigious award even though I have not yet reached my goal. This award has motivated me to exert even more effort in my work," he says.

Suzuki always keeps in mind the slogans of his mentor Mukaiyama: "The deeper you dig with faith, the newer you find," and "Honesty, cheerfulness, passion." He also clearly recalls the words of another mentor in his second hometown, Dieter Seebach, professor emeritus at the Swiss Federal Institute of Technology in Zurich: "One can certainly plan research, but not the results."

"I focus on curiosity-driven research," says Suzuki. "Research that goes as planned does not mean it is successful. We conduct research partly in the hope of finding something new even if our research does not go as smoothly as planned. I want students to learn the fundamentals, but I also want them to establish innovative hypotheses and develop their own research. Don't be afraid of mistakes. From unexpected results emerges new value."

An asymmetric carbon atom is attached to four different substituents. The four substituents can be arranged in space in two different ways that are mirror images of each other (isomers), which leads to the creation of so-called left-handed and right-handed versions of the same molecules. A compound with (n) asymmetric carbon atoms has 2n isomers (diastereoisomers), which are hard to separate. However, chemical reactions have recently enabled us to develop a method of acquiring the necessary isomers. This is called stereocontrolled synthesis.

Polyketides are compounds with cyclic structures that are produced by certain living organisms. They comprise a wide range of complex compounds produced when acyclic ketone is synthesized from acetyl-CoA and malonyl-CoA. Many pharmaceutical products and agricultural chemicals are derived from polyketides.

Mukaiyama has been engaged in the development of a wide variety of unique organic compound reactions, including the Mukaiyama aldol reaction. Recipient of the prestigious Order of Cultural Merit, he is Tokyo Tech's honorary professor, and professor emeritus at the University of Tokyo and the Tokyo University of Science. He was previously researcher emeritus at Kitazato University Center for Basic Research. 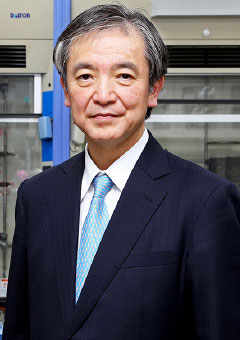