Tokyo Tech Challenge: Toward a Safe and Secure Low-Carbon Society

The Environmental Energy Innovation (EEI) Building incorporates the latest energy technology making the building like no other in the world. Designed to confront global warming, the EEI Building is nearly self-sufficient at producing the electricity it consumes and has reduced its carbon dioxide emissions by more than 60%.

The EEI designers and architects were guided by the following master concepts with the highest priority placed on reducing carbon dioxide emissions. Their target was to reduce these emissions by 60% or more compared to existing Tokyo Tech research facilities. The guiding concepts are: 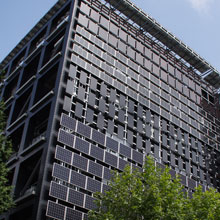 High-temperature waste heat generated by the 100kW phosphoric-acid fuel cells is used by an absorption refrigerator which provides energy to an outside air conditioning system. Low-temperature waste heat is used for a desiccant air conditioner which controls humidity and heats the water used in the building's restrooms. The desiccant air conditioner continuously dehumidifies as well as desorbs and reconstitutes the water with a rotating ceramic rotor. In utilizing waste heat, the total system's efficiency is enhanced.

Heat from outdoor equipment is radiated to the ground where the temperature is stable throughout the year. This effectively saves energy by avoiding the creation of an urban heat island. Through the use of this radiant cooling/heating system, fan power can be reduced and natural air conditioning can be utilized.

The simultaneous usage rate of fume hoods for materials research in the fields of environment and energy in the EEI Building is estimated based on past operational performance data collected at Ookayama Campus. Based on this data, the optimal capacity of the exhaust ventilation system is determined to conserve energy. When researchers are not in their experimental laboratories, the front sash windows of the fume hoods automatically close. The pressure in the room is controlled by interlocking the air volume control valve with the outside air conditioning system, which creates a balance between increased environmental performance and electrical power savings.

Automatic Control of Fan Filter Units in the Cleanroom

In order to design newer and better solar cells, the laboratory is kept free of dust and airborne pollutants with the aid of an outside air conditioning system utilizing waste heat generated by the building's fuel cells. Additionally, motion sensors in the room detect the researchers' movements and select the most appropriate mode from three possible choices for the automatic operation of the fan filter units (packaged air conditioner).

Consolidation and Analysis of Information on Electricity Consumption and Power Generation

Architecture that Reflects the Times through Technological Endeavors

Symbols of Technological and Architectural Achievement

Tokyo Tech's Ookayama Campus buildings, embodying the cutting-edge technological advances of their eras, symbolize and represent the overcoming of architectural challenges. In the EEI Building, the challenge of drastically reducing carbon dioxide emissions created by the research facility housed within it was a primary goal. The building prioritizes solar panels on three of its outer surfaces to this end. In order to maximize the number of solar panels to be used on the long, narrow, wedge-shaped building, a detached frame of panels, the solar-panel envelope, was created. Unlike conventional buildings which utilize solar panels on their walls and roof, this building has solar panels covering a surface area larger than that of the actual walls. In this way the building was able to fulfill its goal of becoming a nearly energy self-sufficient building.

For researchers and students alike, the EEI Building is a central locale in their lives. Various environmental energy technologies were incorporated as unobtrusively as possible and seamlessly integrated into their work and study spaces. Much thought and consideration went into designing such a functional and livable building. Each floor of 800 m2 sought to minimize the number of pillars and inside walls, thereby promoting interdisciplinary exchange between students and researchers. Additionally, research offices and experimental laboratories alternate floors so that researchers and students can easily move between both. There are also numerous other small features which make the EEI Building welcoming and livable. For example, the vertical ducts of the fume hoods are found in the space between the solar-panel envelope and the building where they are protected from exposure to the outdoors and yet free up valuable work and study space inside. Balconies on each floor can be found next to the lounges or refresh rooms. The first-floor Multi-Purpose Hall, designed for exhibiting research results, has long built-in benches which extend along the large windows. Finally, bookshelves salvaged from the former university library form partitions between the student study rooms and the corridors lending warmth to the open areas.

High performance, hysteretic, seismic-energy dissipation braces, built into the building's outer frame, make the EEI Building an earthquake resistant structure while enabling the capture of large open inner spaces. This design absorbs the energy from small-scale earthquakes, reducing the response displacement and acceleration of each floor. Additionally, it avoids damage to beams, columns and the building's exterior in the event of a large-scale earthquake, thus ensuring the long-term use of the building.

The solar-panel envelope is a light-weight, flexible structure on which the solar panels are mounted. It is anchored to the main structure by means of small-diameter, square Vierendeel frame girders.