"Do you know how soap removes dirt?"

Michito Yoshizawa's kind eyes sparkle for an instant as he picks up a molecular model. In his lab at the Chemical Resources Laboratory at the Suzukakedai Campus, where he pours great energy into the development of functional molecules and materials which can respond to external stimuli and environmental change, he cheerfully embarks on an explanation. 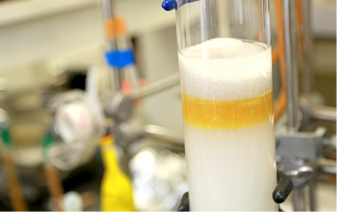 "The soap we use is made chiefly of linear organic compounds. One side is water-unfriendly, or hydrophobic, and the other side water-friendly, or hydrophilic. We call these kinds of compounds amphiphilic molecules, and when we put them in water they come together and form spherical particles with a hydrophobic core and a hydrophilic outer surface. This is known as a micelle. The dirt that you wash off of your body, or your dishes, which is oily in nature, enters into the inside of the micelle. So when water is poured over our bodies, or dishes or what have you, they become clean. That's the mechanism at work."

Molecules that stand alone do not exhibit amazing properties. But when they come together with others in a well-ordered structure a few nanometers in size, they can exhibit unusual phenomena. The mechanism by which molecules automatically group together based on their mutual interactions to form a particular structure is called self-assembly. This phenomenon has been observed throughout living organisms, for example, in the double helix structure of DNA or the tertiary structure of proteins. It was once believed impossible to generate such structures artificially, but that was before Makoto Fujita, a professor of The University of Tokyo and doctoral advisor to Yoshizawa, turned established theory on its head.

The Pull of Curiosity in the Lab

There is one thing in Yoshizawa's curriculum vitae that immediately catches the eye. For each of his degrees, undergraduate, master's and doctorate, he worked in a different laboratory and university. Not unusual for students in other countries, but quite a rare thing in Japan.

Yoshizawa did research in catalytic chemistry while earning his bachelor's degree at Tokyo University of Agriculture and Technology, and then attended Tokyo Tech where he began research in coordination chemistry for his master's degree. As he conducted studies on enzyme-mimetic metal complexes he felt the pull of research while at the same time growing gradually more confident about his skills as a researcher. Then, as if by fate, he had an encounter that led him to do the work he does today.

"I was attending a summer session in the field of coordination chemistry, and I heard Professor Fujita give a lecture there. It really blew me away. He was starting up his own research lab at the time, and he was looking for students who might want to join. Well, I took the bait and got reeled in." (Laughter.)

After finishing his master's degree Yoshizawa transferred to Nagoya University where Fujita was, and there he studied supramolecular chemistry as a doctoral student. With his doctorate in engineering, he followed Fujita to The University of Tokyo, where he continued doing research as a post-doctoral researcher and assistant professor. He subsequently came back to Tokyo Tech, this time as an associate professor. 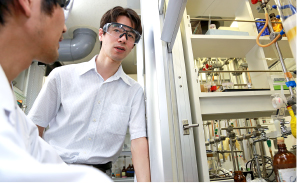 He moved around quite a bit. "It wasn't because I couldn't get along with my advisors or anything!" Yoshizawa protests, a smile on his face. "It was definitely hard at times to leave work and places that I was familiar with, but I would do my best at the next place and then my former professors and colleagues would try to meet with me at conferences. The connections don't stop when you go someplace new, you're still in research and people remain concerned about you and cheer you on. That support has meant a great deal to me."

By studying at each of these places, putting his full effort into doing research with his advisors, and achieving his targeted results, Yoshizawa has earned the trust of others in his field and gained confidence in his own ability to do research.

The Keywords: "Easy to Do" and "Water"

Figure 1: (a) conventional micelle and (b) mimetic diagram of the nanocapsule developed by Yoshizawa et al

At present Yoshizawa's attention is focused on research involving anthracene. Anthracene is an organic compound consisting of three fused benzene rings in a sheet, which shines blue under ultraviolet light. The objective is to create nanostructures in various forms, such as capsules and tubes, through the skillful exploitation of anthracene's shape and properties.

"We are using a self-assembly technique to connect sheets of anthracene molecules together into three-dimensional structures which resemble fullerenes or carbon nanotubes in shape. The idea is that this might make it easy to create nanostructures with novel capabilities."

Well-designed, new molecules are prepared. They then come together spontaneously based on their intermolecular interactions, forming nanostructures with intriguing functions. In January of this year Yoshizawa, together with group members, published their research results in a scientific journal overseas.[i] They synthesized an amphiphilic molecule with a curved framework using two anthracene molecules linked by a benzene ring at 120 degree angles. As they expected, in water, these molecules assemble into micelle-like spherical structures with anthracene shells and become fluorescent nanocapsules.

The striking thing about this result is that by using a curved anthracene framework, both hydrophobic interactions and π-stacking interactions[ii] act as driving forces. The resulting nanostructures are more stable and there is greater control over size than has been the case with usual micelles. In addition, the nanocapsules prepared by Yoshizawa et al encapsulate various colored molecules in water and emit a unique fluorescence through efficient interactions between the anthracene shells and the encapsulated molecules.

This ability to create structures as easily as micelles, structures containing various capabilities not available in micelles, carries great promise for applications with new optical materials.

"Water is key in the research we are doing. When you consider that it is something we all use wherever we are and that it's much better for the environment than using organic solvents, we hope to see broader applications of this technology in the future. The field of medical care, where a drug could, for example, deliver medicine to a specific part of the body via a nanocapsule, is another area where we would like to see application of this research."

Chemistry is the Science of Making Things

Although he is still young, Yoshizawa has earned many honors. He received the Chemical Society of Japan Award for Young Chemists in 2007 and the Young Scientist's Prize of the Commendation for Science and Technology from the Ministry of Education in 2010. He was awarded the Thomson Reuters Research Front Award, which is given to outstanding researchers working in leading edge fields, together with Fujita in 2012. This front-runner in the field of chemistry, from whom much is still expected, has a surprising past.

"My parents were both math teachers so I was actually better at math than chemistry," Yoshizawa smiles. "Not to say that I didn't like chemistry...."

Yoshizawa somehow got into science, but it wasn't until he was at university that he truly felt its full allure. His interest in science only grew as he began to pursue his own research in the lab. There are still so many depths to explore in chemistry, so much yet that remains unknown.

"Chemistry is about making things. And creating things is fundamentally interesting work. Especially if you can make something no one has ever made before. I think in creating, you continue to grow yourself."

In wrapping up, Yoshizawa extends an invitation to those interested in coming aboard.

"Chemistry can surprise you. You can be thinking about something not all that difficult and come up with a new result. You are apt to notice some slight occurrence in the course of carrying out a casual experiment and think, Wait a minute - what's this? In other words, if you have the interest and curiosity, they could easily lead you to a ground-breaking discovery in the field. First get a thorough grounding in the basics, and then come see us at Tokyo Tech. There's a huge, exciting world out there just waiting to be discovered."

[i] The research results were published in the scientific journal of the German Chemical Society, Angewandte Chemie International Edition, and were highlighted in the American Chemical Society's C&EN. See details here. (Japanese)

[ii] The interaction between sheets of organic molecules such as benzene rings. The molecules are arranged like a stack of coins. 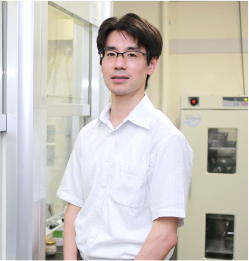 2007 The Chemical Society of Japan Award for Young Chemists)