Surgical assist robots lessen the burden on doctors and patients

"Move your head. The endoscopic image moves with it." 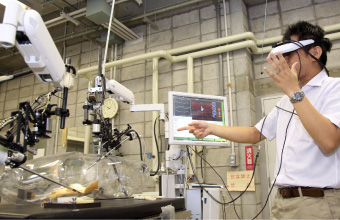 Following Associate Professor Tadano's instructions, I put the head-mounted display on and turned my head from side to side and then up and down. The endoscopic image on the display in front of me moved along with it. Moreover, the image responded to even the smallest movements of my head. The image was as clear as if I were looking at the area with my own eyes. The robot arm is synchronized with an angular velocity sensor that detects head movement and moves the endoscope.

This was developed as part of the "Minimally invasive surgical assist robot system based on ultraprecise control technology for gases," a project Tadano and his group have been working on under the Program for Creating Startups from Advanced Research and Technology (START Program) of the Ministry of Education, Culture, Sports, Science and Technology. Recent years have seen a growth in the popularity of laparoscopic surgery, in which an endoscope and small-diameter instruments are inserted through small ports to reduce patient burden. Some hospitals are now also introducing surgical assist robots. The da Vinci Surgical System[1], one of the first such robots in the field, is a typical example. 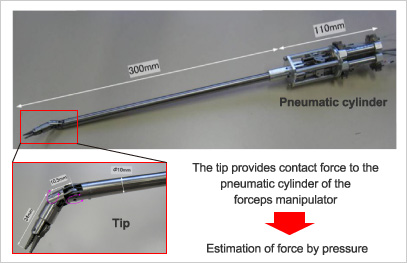 Tadano's surgical assist robot uses pneumatic actuators instead of the electric motors employed in the da Vinci system. It features pneumatic actuators for a manipulator connected to the forceps, and an endoscope control system that remotely controls them. This allows precise positioning and a softer touch that reduces the risk of damage to organs during surgical procedures. In addition to these advantages, the reduced weight of the system makes set-up easier. The most important feature is feedback of the contact force to the operator through a pneumatic cylinder connected to the forceps. This enables delicate and precise control of the contact force for enhanced performance in more complicated surgical operations. The robot is expected to rival the more expensive da Vinci Surgical System.

"The advantage of a motor-driven device is that it can easily achieve a certain level of positioning accuracy through gear-controlled speed reduction, but the contact force tends to be greater. On the other hand, a pneumatic device can control contact force because it can soften motion by detecting external force. Since the robot is designed for surgery, the capability to absorb contact force is the greatest advantage of a pneumatic system."

In the project, Tadano's group has started to work on separate commercialization of the endoscope control system. In November 2012, they registered the system as a General Medical Device (Class I) and have conducted tests at clinical sites in collaboration with the university hospital. Preparation for the start of domestic sales in 2015 has been advancing step by step, with future plans to enter overseas markets. Commercialization of the forceps manipulator is expected in three to four years. For this, Tadano established a company named RIVERFIELD, Inc. in May 2014 with his former academic supervisor Kenji Kawashima, who still teaches at the Institute as a visiting professor and is also a professor at the Institute of Biomaterials and Bioengineering of Tokyo Medical and Dental University. Kawashima serves as president of RIVERFIELD. The company name combines "River", the English translation of the first part of Kawashima's name, and "Field", the English translation of the last part of Tadano's name.

Inspired by advanced technologies in the U.S. to enter the world of medical robotics

Interested in the world of space engineering, Tadano entered Tokyo Tech after graduating from high school in Hokkaido. He changed his area of concentration from physics to mechanical engineering (Department of Mechano-Micro Engineering, Interdisciplinary Graduate School of Science and Engineering) for the master's degree program, and was thinking of focusing on remote-controlled robotics for construction machinery. At that time, the da Vinci Surgical System had just come into the spotlight and the new trend of collaboration between medicine and engineering was starting to attract attention. Kawashima asked Tadano if he would be interested in working on surgical assist robot systems together. Tadano sensed that this was a new frontier and immediately accepted his offer.

"Just at that time, in fact, Professor Kawashima had been engaged in the development of remote-controlled robots for construction machinery, but was searching for new areas to pursue. Although the da Vinci Surgical System had already been in practical use, I think he saw something because research on surgical assist robotics has a lot in common with his work on remote control systems. It was against this background that he put me in charge of the new research."

Difference in the sense of time between medicine and engineering

Tadano took this opportunity to step into collaboration between medicine and engineering for the development of surgical assist robots and began interacting with Tokyo Medical and Dental University (TMDU), a member of Confederation of Four Universities[2]. Tadano and his group began by visiting doctors on staff at TMDU's university hospital to gather information and ask for their comments on concept ideas. In the early stage of research, however, he was often surprised at the difference in the way the two fields looked at things. 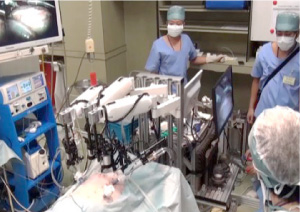 "I was shocked at first by their completely different sense of time. When I suggested a model to a doctor, for example, he said, 'That's good. Can you get it to me next month?' When engineers produce something, they base their design on measurements and figures. Doctors, on the other hand, tend to look at things through their feelings. I struggled to figure out how to translate those feelings into numerical values. Through the experience, I learned there are many challenges in bridging the gap between medicine and engineering."

Development takes more, however, than technical assistance from doctors alone. The development of medical robots requires cooperation from various fields, including electrical engineering and optics.

"Five or six years ago, a number of companies showed interest in the potential of the system to change the world of medicine, but they hesitated to move forward to avoid risk, so we found it difficult to further our research at that time."

"If things continue this way, we won't be able to put our research into practical use...we need a new breakthrough." Just then, the START project was launched. Tadano submitted an application for the project with Kawashima, and it was selected. He tenaciously continued his research for more than a decade, and looks back with pride.

"We continue with our research everyday with the prospect of ultimately constructing a brand new surgical method from scratch. I think our ultimate goal is to make surgical procedures less stressful to patients and say, 'Look how easy it is!' through medical robot development with a brand new concept."

Engineering students can learn to see from the doctor's perspective

While preparing for commercialization, Tadano has been training younger researchers. Students in his lab link their research topics for graduate theses to the needs of doctors in the university hospital, which means that they must complete systems or robots between one year and 18 months.

"Since Engineering students rarely have an opportunity to work with doctors at the university hospital during their research and development, the experience is very inspiring. In addition, I think the chance to see the different perspectives that engineers and doctors have through the development of prototypes in their school days has a significantly positive impact on each student's future. Above all, it is a precious experience for students to learn the entire process of making robots, from concept and design, in the course of development with an eye toward commercialization."

The future of medical robotics is a future full of dreams. Finally, Tadano has a message for young researchers.

"Interest makes even the most difficult challenges enjoyable. This is my experience. Find a field or topic that interests and challenges you deeply, something that pulls you toward it, and have confidence in your ability to move forward as you learn and absorb. Do this, and opportunities will surely come."

A robot surgical system manufactured by US-based Intuitive Surgical, Inc. for endoscopic surgery and approved by the U.S. Food and Drug Administration (FDA) in July, 2000. In Japan, it received approval for manufacture and marketing from the Ministry of Health, Labour and Welfare in 2009, and was introduced in hospitals.

In March 2001, Hitotsubashi University, Tokyo Medical and Dental University, Tokyo Tech, and Tokyo University of Foreign Studies joined forces in academic collaboration by forming the Confederation of Four Universities. A special program based on the confederation was implemented, with the universities making courses unique to their respective academic disciplines available to students. 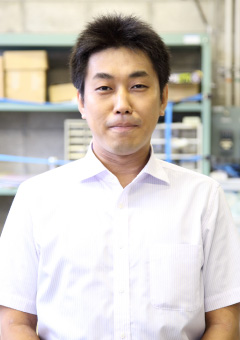